Tom Hardy gave us a sneak peek behind the scenes of Sony’s upcoming Venom film. In a recent Instagram post Hardy gave us our best look at the villainous sometimes anti-hero symbiote, Venom.

Not surprising the way the photo is done it’s pretty hard to see a lot of detail. The lighting and angle make it difficult to see all of what he’s wearing.  We can see that he’s got some tactical gear on.

What littler we can see is definitely enough to speculate on what he could look like. The most popular theory is Hardy will don the Agent Venom costume instead of the more traditional monster costume, we’ve known from the comics. Here’s what Agent Venom looks like in the comics: 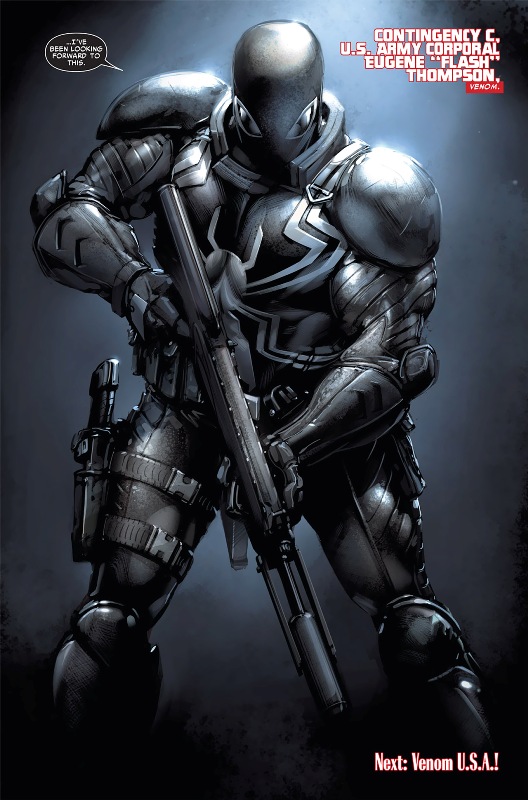 The main difference is that Agent Venom is a different host human than the monstrous Venom most are familiar with. Instead of the traditional Eddie Brock, Eugene “Flash” Thompson is the symbiote’s host. Instead of being an antagonist towards Spider-Man, he’s Peter Parker’s friend. He also served in the Army and would continue to go back and forth between military and civilian life. However, during his last tour in Iraq, Thompson would become severely injured. He loses both his legs after trying to save one of his fellow soldiers.

Upon returning to the United States, Thompson is bonded with the Venom symbiote as part of the U.S. military’s Project: Rebirth 2.0. With the symbiote’s powers, Thompson’s legs are restored and he begins working as a U.S. government agent.

This would be a radically different version than what we saw in Sam Raimi’s Spider-Man 3. However, Sony and Tom Hardy have already confirmed he will be playing Eddie Brock not Flash Thompson. It’s possible they might adapt Thompson’s Agent Venom, but keep Brock as the host. This could allow for a much more villainous version of Agent Venom and instead of working for the U.S. government he might actively work against it. Or he might be part of really dark black ops team that does some really nasty wet work across the globe.

What do you think? Is this Agent Venom? Let us know in the comments below!