Time travel for Avengers 4 is all but confirmed. We’ve seen shots of the Robert Downey Jr.’s Tony Stark in his Iron Maiden t-shirt from Avengers and Tom Hiddleston’s Loki with a muzzle on as he is escorted through what appears to be a S.H.I.E.L.D. compound. And now we are getting an Avengers 4 set photo of Evangeline Lilly that hints at a flashback or time travel.

She shared the photo saying, “Another day done and dusted.

Another day done and dusted. ? pic.twitter.com/MHhobIonUQ

While the photo might not show us any action, it does reveal her haircut which she sported in the first Ant-Man movie as Hope van Dyne. This is radically different than the haircut she has been sporting for the upcoming Ant-Man and The Wasp movie.

In official photos from Ant-Man and The Wasp, Lilly’s Hope van Dyne has grown out her hair and has it tied back in a ponytail. 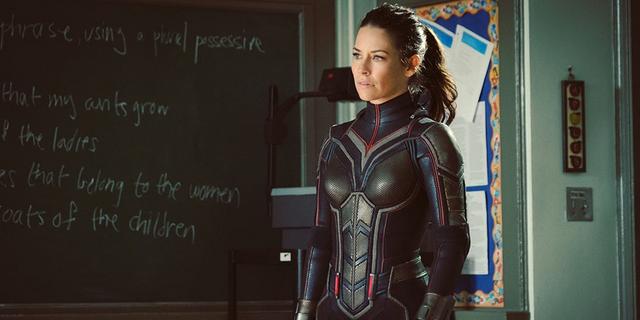 It’s possible we might see the Avengers seek out help from an old friend. Tony Stark most likely knows about his Dad’s work with Hank Pym. And they are going to need all the help they can get to try and defeat Thanos. Why wouldn’t he turn to the daughter of the man who was sent on secret missions with his own advanced suit?

Another reason could be that Tony wants to leverage the capabilities of Pym Technologies. While we know they are working on the Pym particle, it’s possible the technology company might have also been working on other advanced technology. If you remember from the first The Avengers, Samuel L. Jackson’s Nick Fury was developing weapons with the Tesseract. Could Pym Technologies have been the company that was producing them? That kind of tech could be put to good use against the forces of Thanos.

Why do you think Evangeline Lilly has her original Hope van Dyne haircut from Ant-Man?