The Man Behind the Curtain

In 2012, George Lucas sold Lucasfilm and all of its intellectual properties for roughly $4 billion dollars. A few fans were disappointed to find out the buyer was Disney. More fans were excited at the prospect of continuing the franchise without the involvement of its original creator.

There was talk of Lucas becoming the “keeper of the flame” as well as an idea-man for the company. But that didn’t happen. Lucas had an infamous divorce with the world he created. Both parties moved on. But over time there have been whispers about what George Lucas had been planning for his Episode VII. In the early 1990’s, Mark Hamill said in an interview that George Lucas told him to prepare for something around 2012, but that they will be making the prequels first. So George knew he would need an older Luke. But what else was planned for the original sequels to the best trilogy in film history?

Surprisingly, the plans are quite similar to Star Wars: The Last Jedi.

A Lone Hermit, Cut-Off from the Force

A lone girl finds a simple planet with a large temple. The temple? An ancient ruin belonging to the equally ancient Jedi order. It’s only inhabitant is Luke Skywalker. A powerful force-user now removed from the life-force of the Universe. Reluctantly, after rediscovering what the Force means to the world, Luke begins to train the young girl.

Sound familiar? Well, as it turns out that is not a synopsis for Star Wars: The Last Jedi. According to The Last Jedi’s Art Book, George Lucas’ initial plans for Episode VII contained a young girl named Kira. This girl would travel to the planet on which a lone Luke Skywalker meditated, closed-off from the world around him. On that planet would be a Jedi temple. But unlike the ruins audiences were shown in the Rian Johnson-directed film, it looked much closer to the aesthetics of the Lucas-directed prequels. 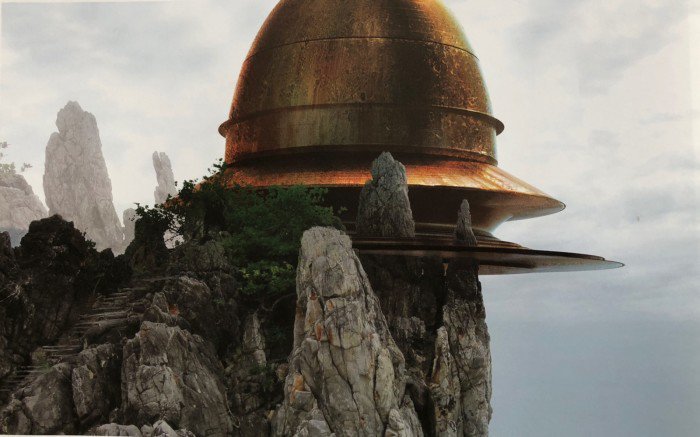 The Original Jedi Temple As Revealed in the Official Star Wars: The Last Jedi Art Book

A more elegant and sophisticated design than the simplified structures seen in The Last Jedi. The book reveals that this was one of several pieces of concept art shown to George Lucas at the Skywalker Ranch in 2013. There wasn’t much to the film yet. The story was about a Luke Skywalker who had found his way to a Jedi Temple somewhere in the universe. For an undisclosed reason he has decided to sequester himself from the world around him.

A young girl, named Kira, finds him there.

Luke and Kira As Revealed in the Official Star Wars: The Last Jedi Art Book

In a more typical story than the one depicted in The Last Jedi, Luke rediscovers his confidence over the film and trains the young girl. Kira, who still had that name when The Force Awakens’ original screenwriter Michael Arndt was on the film, later became Rey. At first, when fans heard that Lucas’s ideas were rejected most believed that there was an entire epic poem somewhere swept under a rug. A massive imaginative plot that is inconceivably amazing. As it turns out fans got to see some of the original creator’s plans. Just simply one film later than George wanted.

Will this alter anyone’s perceptions of the film? Possibly. As many know George Lucas used black and white classic films as references for Star Wars (1977). The most famous of which is Akira Kurasawa’s Hidden Fortress. Though there are countless new ideas hidden in the corners of George Lucas’s massive universe it borrows from some amazing sources. Like all good art it is informed by all that came before it.

The Past to the Present

The story of a reluctant master being forced to teach a new, stubborn student is not a new one. In fact, it was also done in perhaps the best sequel of all time Star Wars: The Empire Strikes Back.

Yoda didn’t believe in Luke at first. He tested the boy and criticized him when he acted irrationally and thoughtlessly. When the young student sensed his friends were in trouble he left his Master’s side despite his warning. A quick decision made by a hothead. But one that made the theme of friendship ring true.

Friendship is also prevalent and palpable throughout Star Wars: The Last Jedi. Like George’s original idea, like his original film, Luke isn’t perfect. He needs direction; he needs help. In The Empire Strikes Back it’s Yoda that gives him the advice he needs to become the Jedi he was destined to become at the end of Return of the Jedi.

In The Last Jedi, Yoda once again appears to “Young Skywalker.” The old hermit looks to the…old hermit and tells him, “We are what they grow beyond, that is the burden of all masters.” It’s been 40 years since George Lucas created a samurai, science-fiction blending space opera.

Little did he know he was merely planting seeds that will continue to grow in the hands of many filmmakers for years and years to come.