Geoff Johns made a bold decision when he decided to make use of Alan Moore’s Wacthmen characters. First of all, Moore loathes DC doing any adaptations or continuations of his work. Second, and most importantly, Watchmen is one of the greatest stories ever told. Regardless of whether or not it’s written word or comic panel. Despite these reasons and more Johns set out to continue one of DC’s greatest worlds.

Our first clue that things were “amiss” is the presence of Rorschach. The graphic novel was rather definitive about his fate. But that didn’t stop Johns from bringing one of the most interesting protagonists of all time back for a second round.

As it turns out, Johns has brought yet another Watchmen back to life.

However, this is far more significant. Because, while the first story ended with the death of Rorschach it began with the death of another “hero.” An anti-hero of the worst nature. A cruel, awful man who’s appearance was nothing short of a grotesque representation of raw masculinity and the pursuit of power. Edgar Morgan Blake, The Comedian. 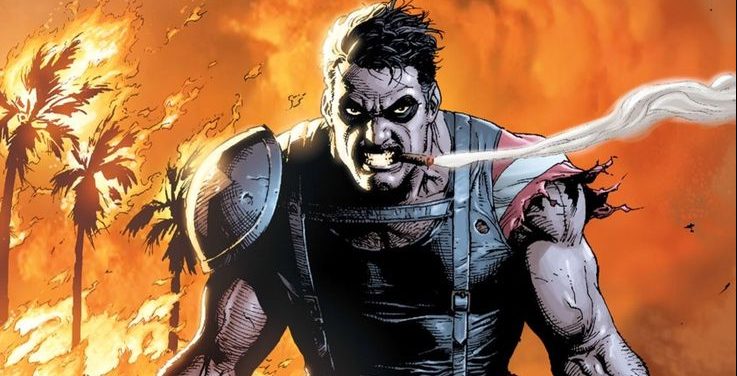 The Comedian’s death was the inciting incident of Watchmen. It started Rorschach’s investigation into the increasing amount of deaths in the cape community. It brought him to the house of his friend, Daniel Dreiberg, and led to the amazing events of the original comic.

The reveal that The Comedian is somehow alive is one of the final panels in Doomsday Clock #2. 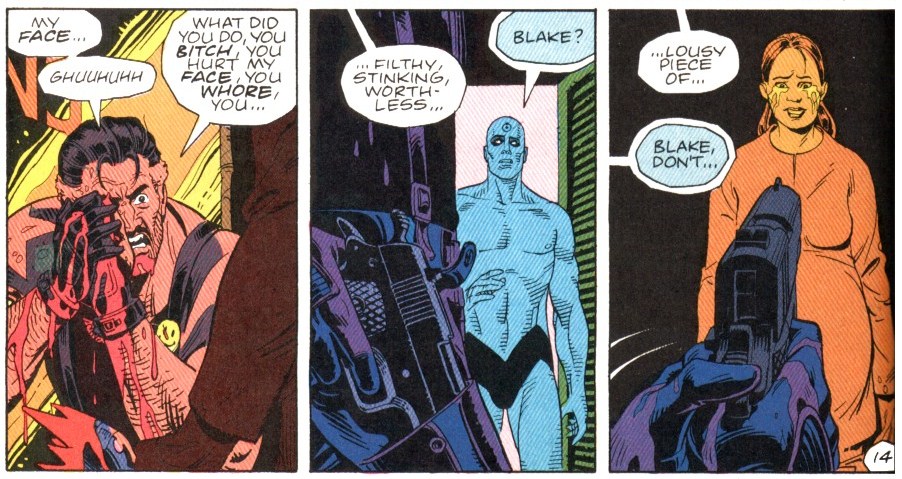 There are many heroes and villains in the world of the Watchmen. In fact, the pages of Doomsday Clock #2 spend a great deal of time discussing how that came about. How a small tailor became a fashion designer of a different nature. Creating heroes and villains and imbuing in them the alter-ego they so eagerly desired. Regular people playing at the game of gods and demons. In the face of an actual god. Dr. Manhattan.

One of the prominent themes of Alan Moore’s comic is the difference between fate and luck. Chance and design. Dr. Manhattan’s father was a watchmaker. A watch now seems to be counting down a “doomsday clock” for these characters and the world they inhabit(ed). In fact, the last Adrian Veidt and Rorschach see of their home is it going up in flames as a Nuke finally arrives. The Armageddon seemingly predicted by the delivery of Rorschach’s journal has arrived just in time as our “heroes” depart. Finding possibly a new home and a new mission in the DC Universe.

Now, The Comedian appears to have been awaiting them. He has been revived, or replicated, and is an obstacle in the way of Ozymandias. At the end of issue #2, The Comedian shoots at Ozymandias but seems to hit Lex Luthor in the gut. He then reveals himself from the shadows and tells Adrian Veidt, “This time, I’m ready for you.” 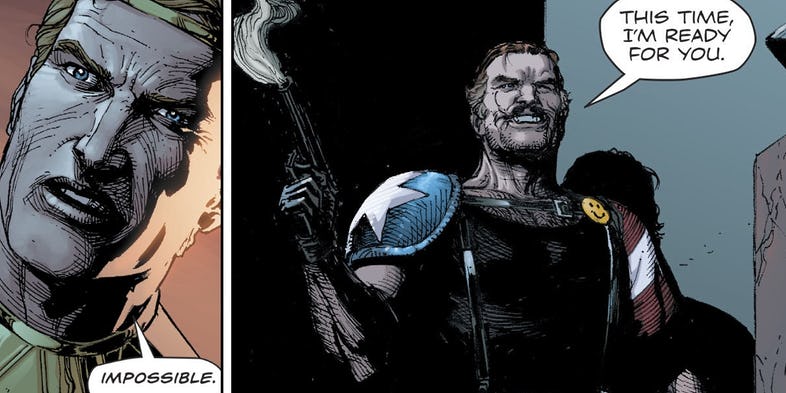 The Comedian is a monstrous satire of Captain America. A Vietnam-War veteran who pillaged and ravaged the countryside and common people. He pulls the trigger after the above panel. Though Dr. Manhattan witnesses the crime, and is capable of stopping it, he doesn’t. A sign that his empathy for mankind was dwindling.

The Comedian has come back to life. Blake found his way into the DC Universe. And has now found his way to the man who killed him: Adrian Veidt, Ozymandias. There’s only one way all of these mysterious happenings could have come to pass: Dr. Manhattan.

Manhattan isn’t so much omniscient as he is 4th-dimensional. He experiences time consistently throughout his life, meaning every moment at once. It’s an incredibly interesting dynamic that’s used well in the comic as well as Zack Snyder’s live-action adaptation. The inescapable, vicious human nature that ruptures and bubbles at the fringes of society is part of what makes Manhattan dismiss and eventually abandon it. His perspective and unsympathetic view is what allows Veidt to keeps his plan from Manhattan’s view.

But that played well into another dynamic from the story. Man vs. God. Ozymandias is the Luthor of his world, the most brilliant man alive. Dr. Manhattan can literally alter matter: creating and destroying life and just about anything else. The hubris and narcissism of the god leads to his being fooled by man. But Manhattan understood the plan in the end, almost appreciating its brilliance. But Rorschach was another representation of man’s perfection. His idealistic nature that verges on hate.

His journal revealed Ozymandias’ plan. Manhattan disappeared; Veidt was defeated. Their kinship and alliance was probably lost and fell to pieces. Another doom looms over the world despite the catastrophes that have already transpired.

Just what horrors do Geoff Johns and Gary Frank have planned for the Watchmen and the original DC Universe is a mystery only a ticking, doomsday clock can reveal.