The house of mouse is pretty trigger-happy when it comes to spin-offs based on existing characters. The chances of Disney making an Obi-Wan Kenobi spin-off are looking pretty good. They’ve got a great director in the form of Stephen Daldry. Supposedly.

But what of the starring role? There are a number of actors who could do a fantastic job of playing the character. But one of the only redeeming factors of the “prequels” is Ewan McGregor’s performance. Well, the Scotsman still looks the part. He’s still an A-list actor; he’s expressed plenty of interest. Fans and audiences around the world would love to see him back in the metaphorical saddle. But mums the word at Disney. Well, this weekend a Facebook post might have revealed McGregor training to once against take up his lightsaber. 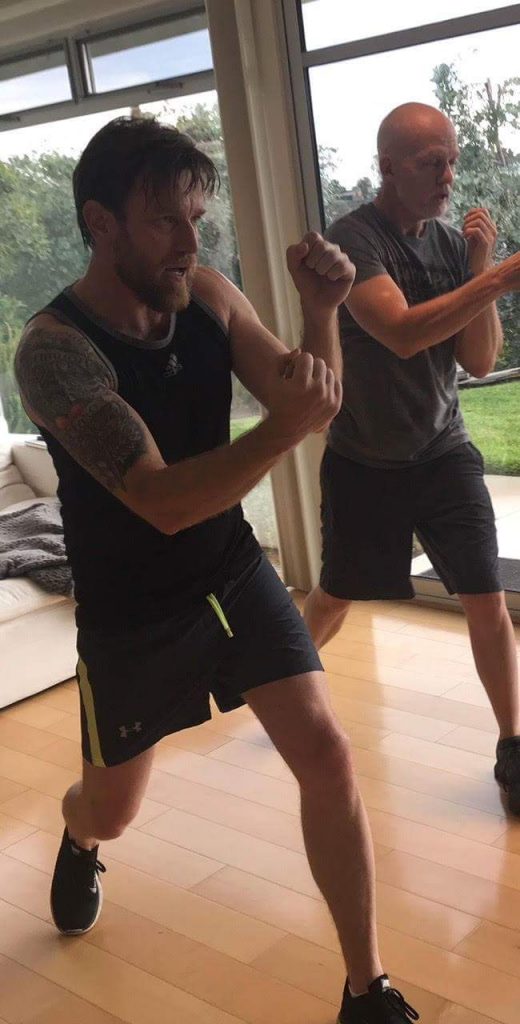 Trainer Tony Horton recently posted this pictured of actor Ewan McGregor and writer Scotty Fifer enduring a rigorous routine of some sort. Ewan happens to be sporting a familiar-looking beard at the same time he’s getting in fighting shape. Coincidence? Maybe.

McGregor doesn’t have any projects lined up so the beard is a little surprising. The fitness? Most likely a result of this weekends Golden Globe Awards. McGregor was a nominee and eventual winner. The actor was probably just trying to look his best.

But the topic did come up. If you put a Star Wars-related actor or creative in front of a microphone with the intention of answering questions, there’s a predictable outcome. They’re going to be asked a Star Wars question. When McGregor faced the press after receiving his award the first question was about Obi-Wan Kenobi.

McGregor’s answer was exciting but not too exciting.

Just A Lot of Talk

“Just that. There’s a lot of talk, and I’d be happy to play [Obi-Wan] again. But there’s no plan at the moment.”

McGregor’s response is simple and dignified. The actor understands the power his words can have when it comes to a role like that. He could have had that entire audience of reporters squealing if he’d confirmed his participation in the film. But that didn’t happen for two possible reasons.

The first is because that’s not how these things happen. Disney and Lucasfilm like to control news cycles to get the most attention. If the Obi-Wan film is going to get officially announced, it will be in splendorous fashion with a large press-release.

The other reason is that McGregor really hasn’t heard anything. As an actor, he wouldn’t be the first piece of the puzzle to come together. There’s countless moving parts to blockbusters like these. Actors aren’t always the last to know about these things, but they certainly aren’t the first.

Ewan McGregor is enthusiastic and interested. What more could Disney and fans ask for?