It’s a question that has raged throughout comic book fandom. Who would win in a fight between Thor and Superman?

Comic book writer Kurt Busiek and artist George Pérez seemingly put the answer to rest in their comic book crossover JLA/Avengers which ran from September 2003 to March 2004. In the comic series Superman lifts Thor’s hammer and eventually defeats Thor. However, later in the series, Superman is no longer able to lift the hammer and he even admits that he barely beat Thor, the strongest opponent he ever faced. 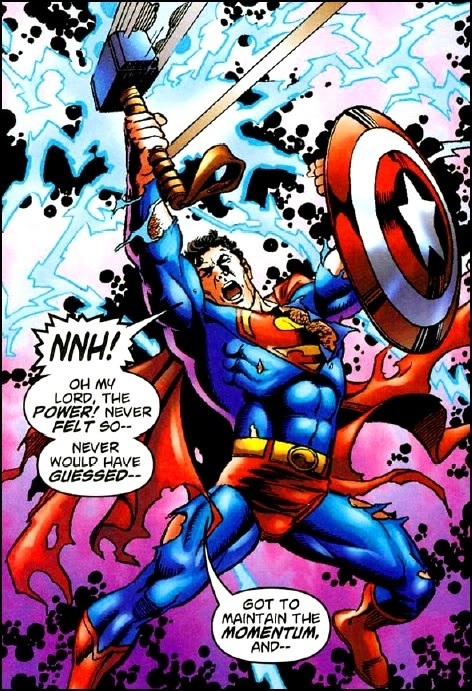 But if the two had a rematch. Would Superman come out on top?

Bat in the Sun posed that question to their fans in one of their best episodes of Super Power Beat Down.

The fight starts at around the 3:40 mark.

Thor lands on Earth in a bolt of lightning and yells out, “Kryptonian!” He seeks to battle Superman to prove who is the greatest warrior. Superman is enjoying life on the farm in Kansas when his super hearing picks up Thor’s mighty challenge. Superman tells Thor is he is uninterested in fighting, but Thor launches into a flurry of fists. The two duke it out hand to hand before Superman uses his cold breath to blast Thor.

Thor then powers up his hammer and calls down lightning to strike Superman. However, Superman uses his heat vision to counter. Thor’s lightning ends up being too much for Superman and sends him flying. Thor leaps into the air as he attempts to bring down a killing blow with his hammer. Superman dodges the attack and then charges Thor carrying him into the sky.

Thor brings down his hammer on Superman’s back and sends the Kryptonian crashing down to Earth. His blow was so powerful it completely destroyed Superman’s homemade suit. Thor then launches another attack with his lightning. Superman appears to be holding it back as he draws closer to Thor. But just as he gets in range of Thor’s hammer, Thor sends him flying into the sun.

Superman floats unconscious next to the sun, but not for long. He is eventually recharged and the fight ensues. You’ll have to watch above to see who won.

Share with your friends and family to see an epic brawl between Superman and Thor.