Beware of Spoilers to Damage #1, ye who enter here

Let the havoc be wreaked! Today marks the release of Damage #1, a brand new series based on a brand new character spinning out of the pages of Scott Snyder and Greg Capullo’s Dark Nights: Metal. Damage #1 is the first title from DC’s New Age of Heroes. The comic “movement” seems to be a mix of old and new. With some of DC’s greatest creators tackling new and obscure characters and titles.

Robert Venditti and Tony S. Daniel are the storytellers behind the first entry into this “New Age.” The star of Damage is Ethan Avery. Ethan joined the army to do some good in the world. Instead, he went on a rampage. The pages of Damage are glorious thanks to the wonderful lines of Tony S. Daniel, inks of Danny Miki and the colors of Tomeu Morey. The story is simple but effective. For one hour Avery becomes a monstrosity known as Damage. The abomination is a Government creation meant to battle the Dark Knights.

Until Mr. Avery becomes uncontrollable. The issue is about Damage breaking out of his captor’s hands and finding his way to freedom. Avery’s voice tries to command his body; tries to keep him from killing. And it does. 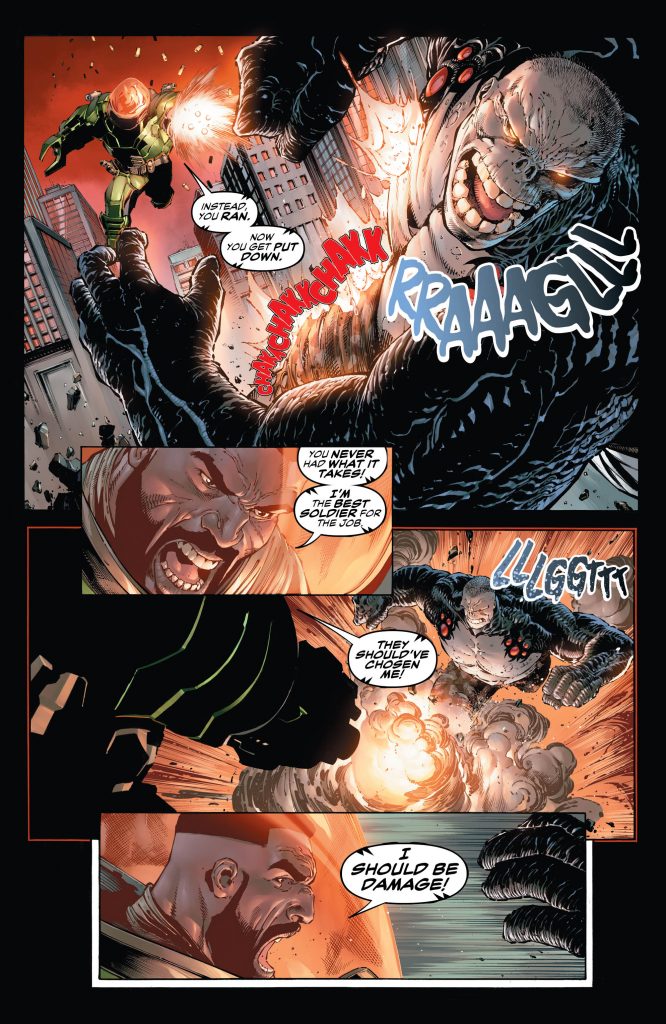 Writer Robert Venditti has always been a fan of battle-suits. He put X-O Manowar on the map. That series has an ancient Visigoth fighting aliens in a synthetic impenetrable armor with an energy sword. So it’s no surprise Damage’s main obstacle is a soldier in a suit of his own. Convinced he can take Avery.

Ultimately, Damage proves to be too much for the arrogant soldier. Avery lays him out but without laying him low. When the time comes for Damage to finish the soldier off, he doesn’t. A brief sign of the humanity within this monstrous shell. 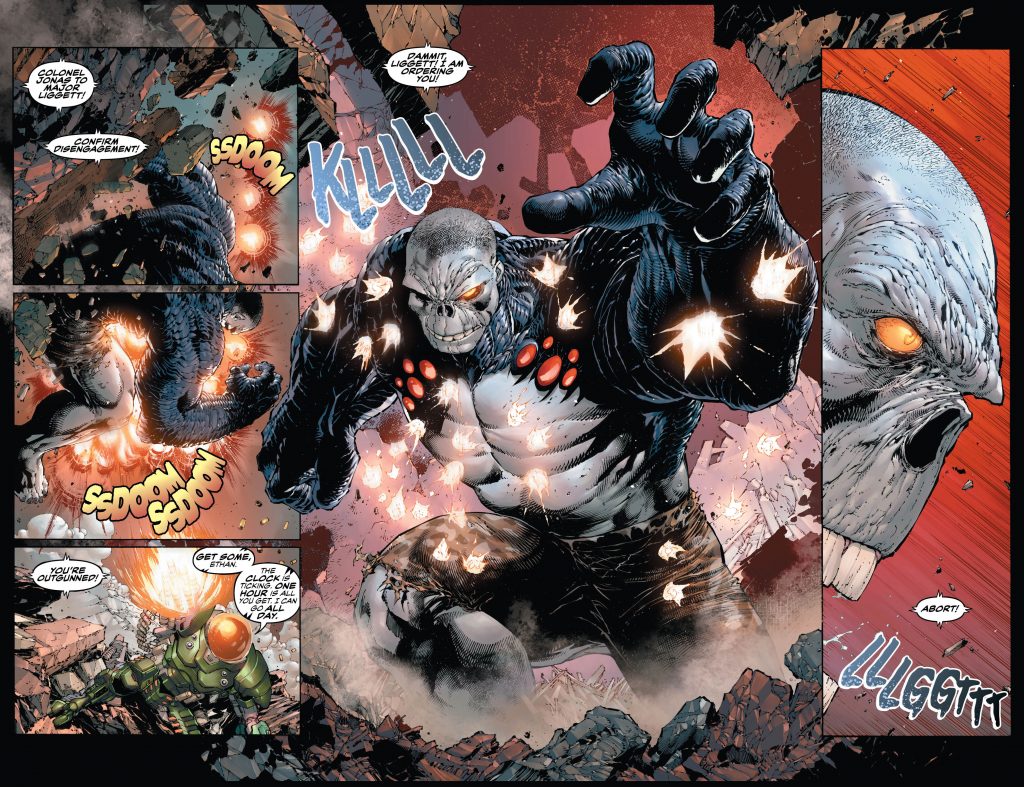 The story ends with Government agencies convening on how to deal with their own creation. Damage is out of control. His hour may be up, but Ethan Avery is still an unknown hostile in a highly populated area. It makes sense that he’d draw the attention of quite a few interested parties. But this is a #1 issue of a brand new release. Avery is an unknown. So it wouldn’t hurt if DC threw in a cameo or two from some recognizable faces. And they did.

When it comes to the United States Government’s interactions with superheroes, only a few names come to mind. In the Marvel Universe you have Nick Fury. A valiant leader looking to unite the world’s greatest to do some good.

DC’s equivalent has another motivation entirely. Instead of banding together a bunch heroes to defend the Earth, this agent uses the world’s worst to “do some good.”

That’s right, hot on the tail of Ethan “Damage” Avery is none other than Amanda Waller and Task Force X. A wonderful page by Tony S. Daniel introduces the team near the end of the issue. Waller is mad as hell that Damage hasn’t been found. Since the armored soldier didn’t do a great job of getting Avery back, it’s time for Task Force X to give it a try.

Unfortunately for Ethan Avery, the issue sees out of sorts. The final page shows him lying helpless and back in human form. His powers have gone; his hour is up. Just as one of the most powerful forces on the planet are sent after him. Amanda Waller doesn’t tolerate meta-humans that she can’t control. Hopefully, Ethan can keep his freedom.

Using his humanity for good and saving the Damage for the bad guys.