Beware for spoilers to the Justice League #37, ye who enter here

Martian Manhunter is one of the best Justice League members of all time. Despite his current lack of representation on the shelves, he’s a phenomenal character. The last comic J’onn J’onzz starred-in was the existential, stellar mayhem that was the New 52 Martian Manhunter series by Rob Williams. Williams is currently making mischief for the Suicide Squad, but he made his mark with J’onn. The series literally broke the character apart. Taking every facet of the last surviving Martian and playing him against…himselves.

It was an imaginative comic that didn’t get enough attention. Thanks to Williams’ incredible work the brief series will be remembered for quite some time. But sales weren’t great. So the character didn’t get much representation in DC’s latest comic-reboot, Rebirth. Actually he hasn’t appeared in any comic series since the event.

But hey, at least he’s on Supergirl.

That’s not nearly enough J’onn J’onzz for comic fans. Many have wondered when the character would finally make his debut into the current DC comic continuity. Now, that time has come. But not in the way you think.

Christopher Priest, writer of the Deathstroke series, recently took over Justice League. In the most recent arc Priest shows a flashback to the League’s earlier days. And either in a nod to the team’s former line-up, or as a clue for stories to come, Priest managed to throw J’onn some love with this panel. 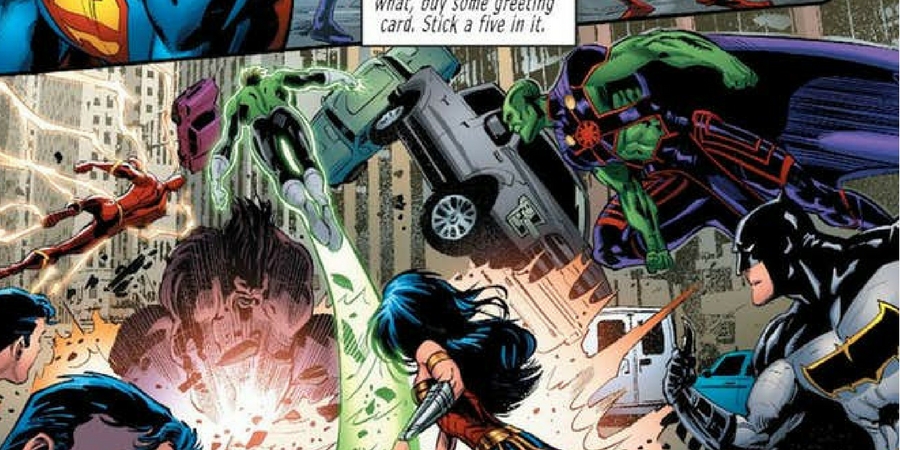 And that’s it. That’s J’onn’s entire appearance, featuring his New 52 costume by Eber Ferreira and Eddy Barrows. But it could lead to a much brighter future for the loneliest alien in the DC Universe.

Does Priest actually have plans for the Martian Manhunter? Maybe. With this panel Priest does re-write a small part of the current DC History. J’onn never appeared with the team in the New 52, in which the entire Justice League origin was rebooted in the Origin story arc. Cyborg replaced J’onn in the League for multiple reasons. It makes sense for J’onn to be replaced on the team. In a time when diversity and inclusion is so important, Cyborg is the exact character to promote.

Vic’s talents are unlike any of his teammates’, outside of Batman’s hacking skills. Not only that, but Victor Stone has paid his dues. He’s spent years and years as a loyal and capable member of the Teen Titans. If anyone deserved a chance at the “major league,” it was Cyborg. He also made his live-action premiere in this year’s Justice League.

Sadly, all of that effectively benched J’onn J’onzz from a team he’d served on for many years. And outside of his presence in the Justice League of America, Justice League United, and his own limited series he hasn’t been around much for the last couple of years.

It may sound like a lot of books, but he was one of the founding members of Justice League: The Animated Series’ team roster. One of the most popular versions of the League. Ever. Like many DC fans, Christopher Priest seems to realize the Martian Manhunter deserves more time in the sun.

Since there still isn’t much information to go on, it isn’t time to get excited yet. J’onn still has yet to utter a word since DC Comics had their Rebirth. But his costume does sit in the “trophy” room of the Watchtower. Hopefully, J’onn J’onzz will return soon enough to claim it.