**Spoilers for The Demon: Hell is Earth #3 Below**

The DC Universe has making some big changes throughout their entire line-up of comics. Some of the biggest changes are happening in the pages of Doomsday Clock. However, another book, The Demon: Hell is Earth, is seeing a huge grab for power play out in the DC Universe’s supernatural side. In fact, we just found out hat Lucifer no longer reigns over Hell. There is a brand new ruler of the demonic dimension. But what might be even scarier is that he’s not satisfied with ruling just Hell alone. He’s got plans for Earth as well. 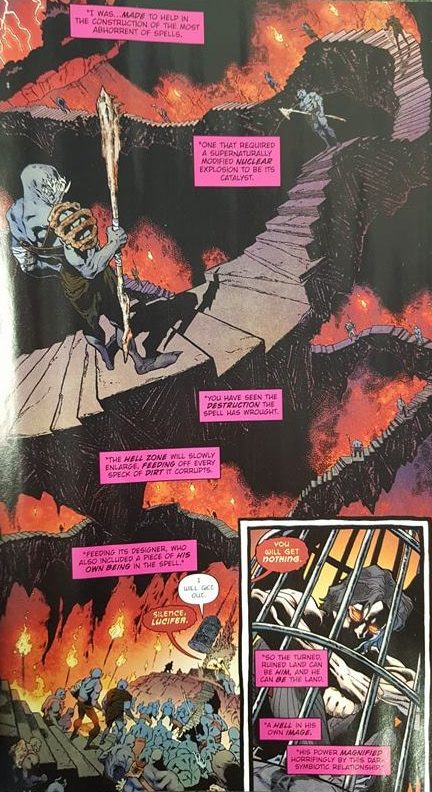 In fact, this new ruler has already begun bringing Hell onto Earth. He’s created a Hell Zone in Death Valley, California and if the wizard Merlin is to be believed, “once he has sucked enough power from his expanding Hell Zone…He will enter this dimension through the tear…All of Earth will be instantly transformed into…Perfect Hell. His power will grow immeasurably. He will be virtually unstoppable. Existence will be Doomed.” 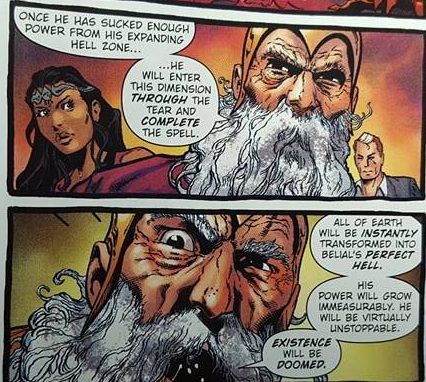 The Hell Zone will continue to expand in Death Valley feeding the new ruler of Hell and making him stronger than ever before. In fact, the spell he used Merlin to create binds him to the land and the land to him. It will allow him to create a Hell in his image.

But who is this new threat to the DC Universe’s existence? Who is so powerful to have dethroned Lucifer and set out to turn Earth into Perfect Hell?

The new master of Hell is none other than Etrigan’s father, Belial!

Etrigan, Merlin, Jason Blood and Madame Xanadu look to be in a world of trouble with Belial’s power rapidly growing!

This is just one of the many spectacular surprises in writer Andrew Constant, penciller Brad Walker, inker Andrew Hennessy, and colorist Chris Sotomayor’s Demon: Hell is Earth. The miniseries has been exceptionally strong three issues in. And now with the major threat revealed, I can only imagine it will get any better. If you are looking for some supernatural fun. I definitely recommend picking this one up! There is even a rhyming Demon who has a wicked temper and loves to go on killing sprees! It doesn’t really get any better than that does it?