“Beetle Bailey” cartoonist Mort Walker passed away at his home in Stanford, Connecticut at the age of 94.

Walker died in his Connecticut studio from complications of pneumonia as reported by Bill Morrison, the president of the National Cartoonists Society.

The idea for Beetle Bailey was based on Walker’s time at the University of Missouri and his friend David Hornaday. The school even has a statue of “Beetle” on campus.

The strip first saw Beetle enlist during the Korean War. However, Walker had him return home due to concerns about the long-term sustainability of an army strip. But due to reader demand, he reenlisted and remains a private to this day!

Walker even drew himself into the comic as Lt. Fuzz. Other characters include Sarge, Gen. Halftrack, and Plato.

“Beetle Bailey” was distributed to more than 1,800 newspapers in over 50 contributors and had a combined readership of 200 million people daily.

However, the strip did see a number of controversies. Star and Stripes actually banned the strip fearing racial tensions. And Mort drew criticism from feminists due to Halftrack’s ogling of Miss Buxley.

Before he began Beetle Bailey in 1950, Walker served in the U.S. Army during World War II.

“Beetle Bailey” wasn’t Walker’s only venture in comics. In 1954, he teamed up with Dik Browne to create “Hi and Lois”, a Beetle Bailey spin-off. Lois is Beetle’s sister. He also worked on “Boner’s Ark”, “Gamin and Patches”, “Mrs. Fitz’s Flats”, “The Evermores”, “Sam’s Strip”, and “Sam and Silo.”

With “Beetle Bailey’s” success and a grant from the Hearst Foundation, Walker founded the Museum of Cartoon Art in Greenwich in 1974. In 1992, it moved to Boca Raton, Florida. Unfortunately, it was dissolved in 2002. However, much of the collection was preserved and joined the Billy Ireland Cartoon Library & Museum associated with Ohio State University in Columbus, Ohio.

Not only, was Walker an exceptional cartoonist, he also wrote an autobiography, Mort Walker’s Scrapbook: Celebrating a Life of Love and Laughter.  He also wrote a satirical book on cartoonist devices called The Lexicon of Comicana. In the book he even invents his own set of international symbols called symbolia. 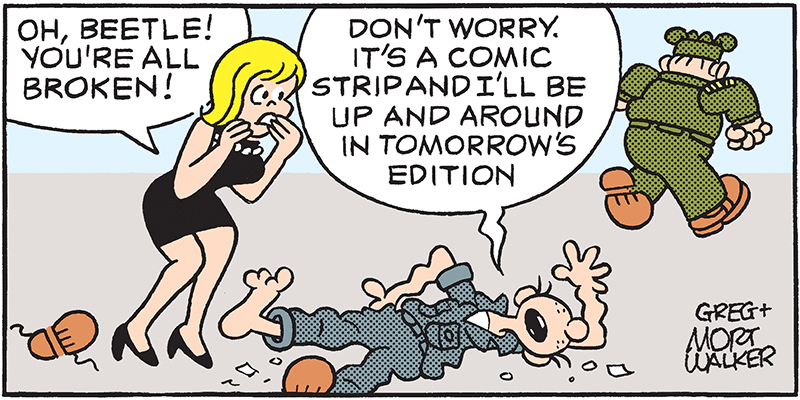 Mort Walker was inducted into the Museum of Cartoon Art Hall of Fame in 1989. He won the Rueben Award in 1953 for “Beetle Bailey” as well as the National Cartoonists Society’s Humor Strip Award in 1966 and 1969. He also won the Gold T-Square Award in 1999 and the Elzie Segar Award in 1977 and 1999. Most recently he received the Spanky Award for lifetime achievement from the Cartoon Art Museum in 2010 at New York Comic-Con.

He was also honored by the American Legion receiving the Fourth Estate Award in 1978. The United States Army also gave him the Decoration for Distinguished Civilian Service in 2000.

Mr. Walker is survived by his wife, Catherine Carty, his children and three stepchildren.