It’s been a long time coming.

Scott Snyder and Greg Capullo have been wreaking havoc across the DC Universe for about six months. One of the best creative teams in comics up their own ante in today’s Dark Nights: Metal #5. The Dark Knights, different iterations of Batman fused with the powers of a Justice League member, have torn the Multiverse asunder. They’ve done this all to serve Barbatos, a god whose only goal is to meld the Dark Multiverse with the original. Snyder is not afraid to make big changes with these characters.

A few weeks ago, a major DC superhero finally got some love in Rebirth. He wasn’t “in an issue” but he was in a flashback, which was better than nothing. But now, Scott Snyder and Greg Capullo have brought him back in style.

Hal Jordan and Mister Terrific are stuck in a literal jail, when a weird Thanagarian approaches them. They try to get the guy to quiet down while they plot their escape. However, the weird Thanagarian reveals himself to be J’onn. Beautifully illustrated by the great Greg Capullo, with inks by Jonathon Glapion and FCO Plascencia. 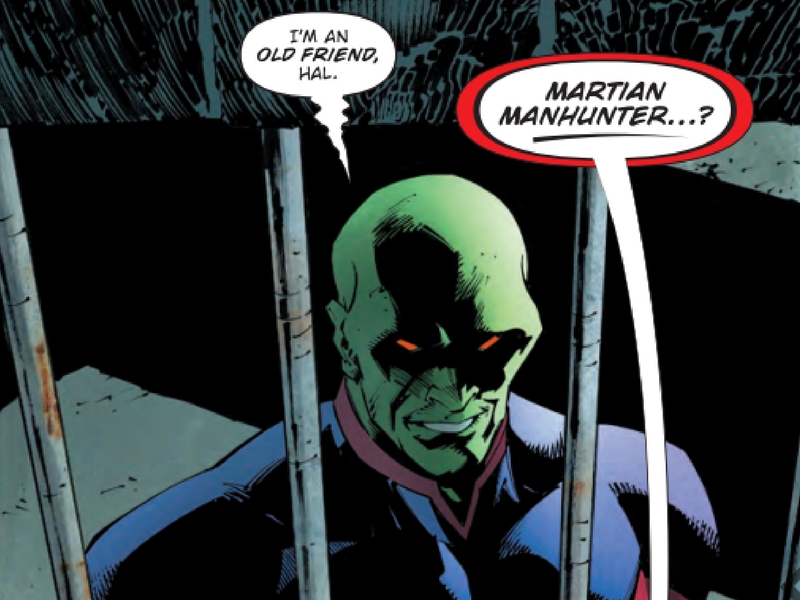 Readers across the world would recognize that Martian brow/forehead anywhere. While J’onn doesn’t get to do too much in the issue, his appearance is a wonderful addition to the Rebirth DC Universe.

Snyder and company are building to Justice League: No Justice without anyone noticing. There are MAJOR implications for the fate of the entire Multiverse at the end of Dark Nights: Metal 5. Hopefully, now that the League has one more of its many members back they can start fighting back against the darkness.

Where, oh where, had our little J’onn gone?

The Martian Manhunter was one of the 7 “main” Justice League members for years. At the end of the New 52, he had his own fantastic series written by Rob Williams. But when Rebirth began the Manhunter was nowhere to be found.

So just what happened?

Well, Dark Nights: Metal #5 offered an answer. But it wasn’t a great one. In the brief moment J’onn had to speak with Hal he tells him he’s, “been here on Thanagar Prime, exploring the very questions you are asking, yourself. Why this place and others were kept secret…”

Unfortunately, not many of those details are explored in the pages of the comic. Clearly J’onn didn’t learn anything too important to Dark Nights: Metal, but something more important to the future story of Justice League: No Justice. Unfortunately, this does leave his presence in the current book a little disappointing. His return to the DC Universe is absolutely welcome. It’s been a long time coming, after all. But he deserved to have a more important role than to be just placed among random teammates in the book’s final pages.

The story and the character deserve better than that.

But unfortunately, if Snyder wanted to use the character in any capacity he would need to explain away his absence. Perhaps making the excuse less meaningful was a dig at DC. A knock at the company for benching one of their best characters for no good reason.

Still, it’s good to have Martian Manhunter back with the Justice League. Because whatever horrible plan Scott Snyder has for these characters in Justice League: No Justice makes it obvious they’re going to need all the help they can get.