CBR and Polygon writer Kieran Shiach has made it his personal mission to get DC Comics to fire one of their superstar artists Ethan Van Sciver.

Shiach began his campaign to fire Ethan Van Sciver back in July of 2017. 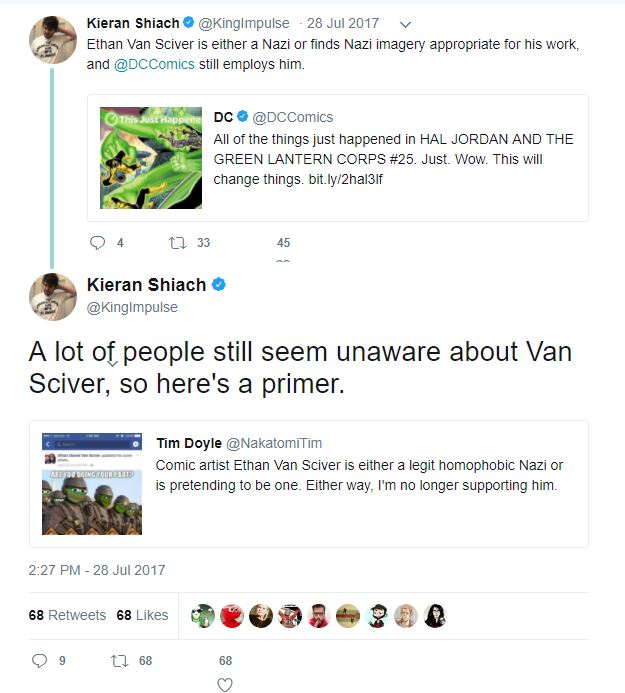 Just a few days later he says, “I would love it if DC Comics fired Ethan Van Sciver.” 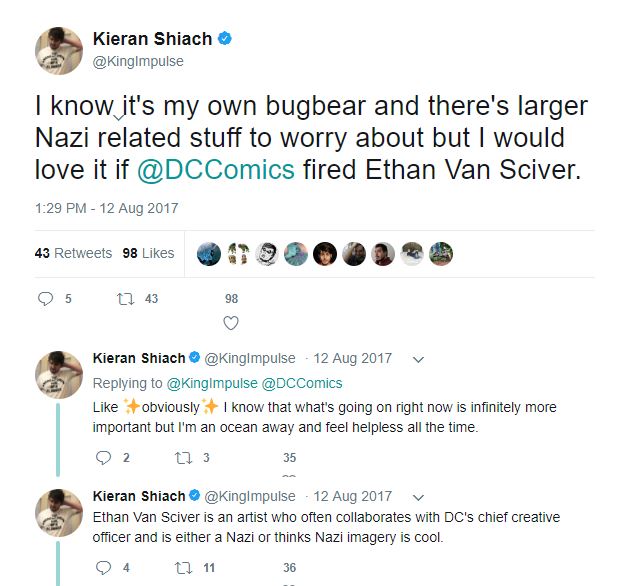 Shiach even said he would continue to beat this drum. “There’s always people for whom its new information, so I’ll keep banging on about it.”

As to Shiach’s claims about Van Sciver being a Nazi, Van Sciver denounced the claims and even called them evil.

He also called the people spreading the images and the claim that he is a Nazi liars, “These people who spread these images and claim that I’m a ‘Nazi’ are liars. They are lying. Flat out. They are liars who wish this industry wasn’t tolerant of people who do not share their partisan political views.”

And it does appear Shiach is spreading lies. He claims Ethan Van Sciver was attached to a sketchbook called Uber Alles. However, the idea for this sketchbook was Ethan Van Sciver’s colorist Moose Baumann. In fact, Baumann admits it’s his idea in an email to Bleeding Cool.

One of the people accusing @EthanVanSciver of being a Nazi is Kieran Shiach. A journalist at @CBR . He did so last year in a Twitter thread Bleeding Cool wrote an article about.

– Kieran references a sketchbook that DOES NOT EXIST.
– Ethan DID NOT MAKE an "Uber Alles" thing. pic.twitter.com/l306e6y7U0

Ethan even explained the title of his 2007 sketchbook, My Struggle.

Their evidence is some ridiculous out of context images from a decade ago, when we were all much more friendly. Being called a ‘Nazi’ by a fellow creator then was quite different, like me calling someone a commie. It was meant in fun. But occasionally, some truly weird people would make a claim that my little diamond logo was a swastika (oh?? HOW? It’s based on the Iron Maiden logo). and a friend would satirize it by making it look like one. For laughs. Because it’s absurd.

Around the same time, I decided that I’d make my sketch books look like extremist political tracts. One was called MANIFESTO and contained communist dogma, with backward letters to look like Russian language. The other one was called ‘MY STRUGGLE’ and contained my earliest work on Cyberfrog up to my recent work. The cover was SINESTRO, who we’d redesigned that year to resemble Hitler, and with the fact that most people knew I leaned right, this was a JOKE. Made self-effacingly to my peers who I considered my friends.

There have been consequences to people like Shiach claiming Ethan Van Sciver is a Nazi. Van Sciver’s been threatened with violence on multiple occasions. In fact, after he performed a fan signing at Gotham City Pizza, it was vandalized the next day.  More recently, a number of individuals threatened violence on him at Emerald City Comic Con.

These threats of violence have not deterred Shiach from continuing his campaign to target Ethan Van Sciver.

Just recently, Shiach insinuated he wants DC Comics to once again fire Ethan Van Sciver. In fact, he was trying to start a hashtag and encourage others to pressure DC Comics.

“I like to hope that his time is up, but we’ll see. There’s still lots of work to do get DC to acknowledge it.” He added, “I’m wondering if we can’t get DC to address it directly, if a grassroots movement might help. Maybe a hashtag? I’m leaning towards #EVSOut but I’m open to suggestions.”

Daily Caller writer Ian Miles Cheong points out Shiach’s hypocrisy. He says, “Journalist makes up lies to drag a comics artist for being a republican, then claims victimhood after said artist deletes his twitter account. Where does it end? Suicide?”

Let’s hope it doesn’t come to that.

If you’re trying to get me fired simply because you don’t like my worldview, well then, I’m going to fight back. Partly because I like my job, and partly because you’re wrong about your assumptions, but mostly because your tactics typify a toxic blend of laziness and group-think that are all too common today – a hot mess of hashtags and intolerance that deepen the chasm currently dividing our country.

Differences of opinion or comments that offend someone should not lead to a person being fired. These witch hunts need to end.

We reached out to Kieran Shiach for a comment, but did not hear back at time of publication. Ethan Van Sciver was also contacted. He did not have a comment.