She elaborated the piece would be “about ‘comicsgate’, more specifically accusations that [Ethan has] used [his] influence and power in the industry to encourage far-right harassment campaigns online and that [he has] relationships with accounts involved in the targeted harassment of people in the comics industry.”

Krishna then goes on to say she’s “been told a number of anecdotes about [Ethan’s] behavior from other writers, illustrators, and people involved in comics.”

Those anecdotes include a number of debunked stories as well as instances that Ethan Van Sciver has already addressed. But since these attacks continue, Ethan spoke with us and addressed each of her supposed pieces of “evidence” against him. We will go through each of BuzzFeed’s allegations word for word and show Ethan’s response to each of the allegations. Each of the allegations are directly quoted from BuzzFeed News reporter Rachael Krishna.

BuzzFeed Allegation: By asking Darryl Ayo to appear on your show, then continuing to tweet about this, you opened him up for abuse from trolls and encouraged this.

Ethan’s Response: “Darryl Ayo is a stranger to me, and yet since last May, he has been sending tweets out that I am a White Supremacist and a Nazi. I am NOT a White Supremacist or a Nazi. I find racism deplorable, I find bigotry disgusting, and I have never engaged in racial politics or “Naziism”. My children are Jewish!!!

I am a moderate Republican.

Darryl’s tweets circulated, influenced other twitter users, confused my fan base and made their way back to me. This caused me and my family intense stress, to the point where we were afraid to travel because of personal threats we were receiving, all of them using the word “Nazi.”

I ignored Darryl, as he continued tweeting lies about me through August.

Soon, after having established a successful and growing YouTube page called ComicArtistPro Secrets, in which I endeavored to present left wing creators to my audience in a cooperative, conversational light, I grew brave enough to invite Darryl Ayo, who I believed was an intellectual left winger who simply didn’t know me at all, to my show to interview him, and hopefully humanize myself to him.

There would have been an enormous audience. Had I abused him in any way, I would have been condemned, dead to rights, on video. I wouldn’t have…I have a history on my channel of conducting interviews with viewpoints as diverse as Mark Waid and Vox Day. I allow them to speak, I let the audience decide.

Darryl declined to be on the show. He said it was midnight, which it was, but he was up tweeting, which is how he saw my tweet.

He then began to tweet horrible things about me, wanting to attack him, etc. I responded, incredulously, and we had a short spat in which I realized I wasn’t going to accomplish anything. I blocked him, he continued cursing my name…and continues to. My fans see my name, and they try to defend me. He tells them all, no matter how polite, to go f*** themselves. But the more he name drops me, the more my fans defend me, and the more his fans attack ME.

If you remember Ethan Van Sciver has been threatened with physical violence on multiple occasions. He was first threatened before an upcoming fan signing at Gotham City Pizza in Florida and then most recently if he happened to show up at Emerald City Comic Con.

And Ayo definitely referenced or called Ethan Van Sciver a white supremacist and a Nazi on several occasions. 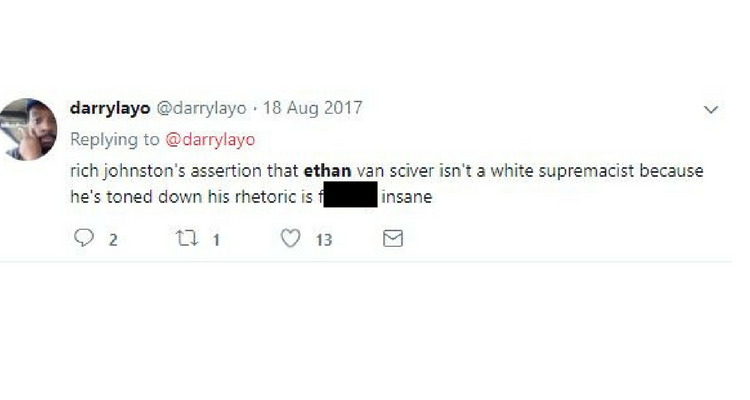 And here’s how Ayo described Ethan’s request to join him on his show: 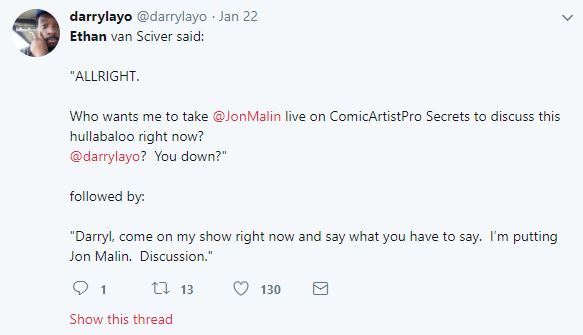 Doesn’t look like harassment at all. He’s just letting him know the show was taking place right now. It looks like the invitation has been blown out of proportion.

But this isn’t the only allegation BuzzFeed levels against Ethan Van Sciver. There are ten in total. Ethan responds to each of them.

BuzzFeed Allegation: “A thread on IGN shares several stories about you being an ‘online bully’.”

Ethan’s Reponse: “I did a video explaining that the gentleman who wrote that blog used manipulative tactics to extract deeply personal information and our contact info from my amenable ex-wife. He then began stalking us.”

“The dude was stalking my family. “Hey, can I come shoot at your range? I’m a gun guy.” :::wife gives cell phone to meet up::: “Hey, can Ethan sign some books for a sick child?” :::wife gives home address for books to be sent:::
Dude then begins texting my wife questions about me, sending mail to my house, etc.”

“My wife was not “his friend”. She referred to him, when he texted her many times, as “your fan.” Irritably.”

BuzzFeed Allegation: “Alfie Norris wrote a blog in 2015 in which he says you and friends bullied and harassed him and his family.”

Ethan’s Response: Alfie’s article was a sad and sordid affair of some actual true and ugly harassment. Much of which he probably deserves. From people who have interacted with him, who have dealt with his abuse. His harassment. His language, his vile, coarse treatment of other people. ANd Alfie has turned that around, and laid that at the feet of me. I was his friend. We had a falling out because I got sick of it. I got sick of it, and this fellow? The type of fellow who gets upset because I take another man out to see Bruce Springsteen, that isn’t him? This fellow wrote an enormous column defaming me, accusing me of things he has no evidence for, and that are currently being circulated by people who are calling me names. Calling me a harasser, calling me an abuser, calling me a bully. For their back-up, he posted a link to Jeff Hartz, who stalked and harassed my family, until we got brave enough to tell him to go away. And he uses that as proof, as evidence, that I am all the things he accuses me of being.”

Ethan also previously did a video regarding Alfie.

Ethan’s Response: “My Struggle” was a play on the fictional evil fascist dictator SINESTRO, who is known as a Space Hitler. A villain. The sketchbook is also representative of my struggle in art. I also did one called MANIFESTO made to look like communist propaganda. Nobody mentions that. Radical political tracts were a recurring motif in my self published sketchbooks, and it shouldn’t be interpreted in a literal sense. They cancel each other out so that all that’s left is the art.” 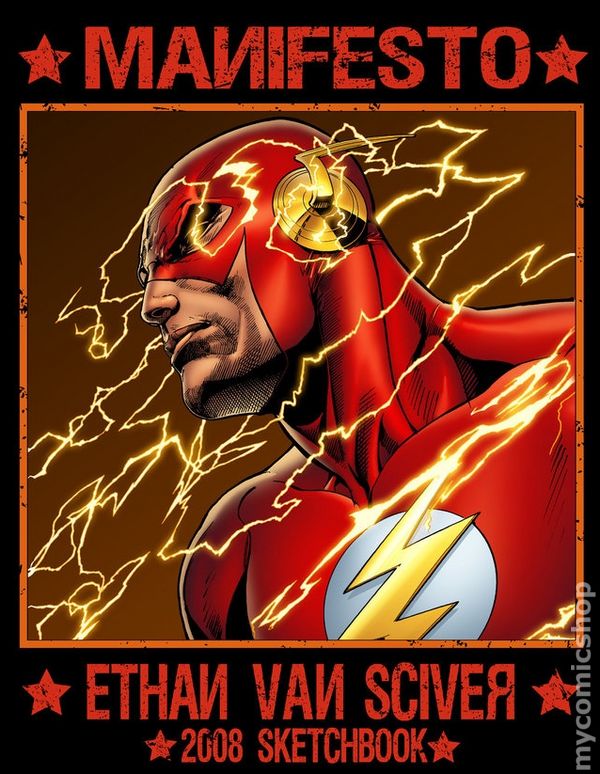 This has been one of the main ways a number of individuals including CBR writer Kieran Shiach have attempted to attack Ethan and label him a “Nazi.” Unfortunately, they appear to ignore the actual evidence that Ethan also did the Manifesto sketchbook.

Ethan’s Response: ““FascistFrog” is the original name of my own creation CYBERFROG, which I created when I was 19. He was an ultra violent vigilante frog who took no mercy on villains. I understood “fascist” to mean cruel and unfair when I was a teenager. But I named my YouTube identity after my very first creation back when I launched my YouTube, in 2005. I’ve since tried to change it, but it doesn’t let you.” 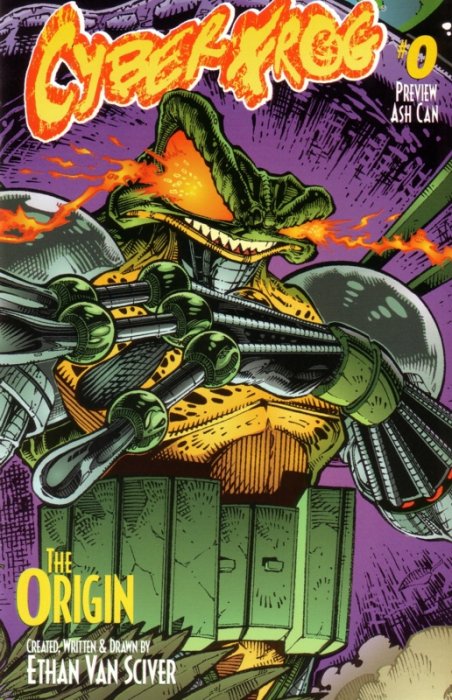 Ethan’s Response: “That was a drawing of Spider-Man making the OK sign. I DREW IT IN 2010. TWO THOUSAND AND TEN A.D. and it meant “ok.?” THE OK SIGN ISN’T A WHITE SUPREMACIST SYMBOL, ACCORDING TO THE ADL. see link.
https://www.adl.org/…/no-the-ok-gesture-is-not-a-hate…

I told DrunkComicsFans that if they continued referring to me as a Nazi, I would “make them famous.” It’s a line from a movie. I meant, I’d talk about their organization and how they continually defamed me even as I asked them not to.”

BuzzFeed Allegation: At 2013 Chicago Comics Expo, a fan reports that they saw a statue of a monkey with Obama’s head on it in your booth.

Ethan’s Response: “Well, this a LIE. This is never happened. The person who said this is a liar. And I want you to ask yourself: Why are there no photographs of this? That convention was attended by tens of thousands of people, people from Chicago where Obama is from. Why did nobody mention it, ever, except for one guy, 4 years later?

This gentleman invented this lie to get attention when I was being mass attacked online last year.”

Ethan’s Response: “I don’t believe Jordan Peterson has anything against transgendered people, and indeed, neither do I.”

BuzzFeed Allegation: Your closeness and promotion of the Diversity and Comics YouTube and Twitter pages – even after the account has been connected to the aggressive trolling of multiple people in the comic book industry, as well as pushing a far-right agenda

Ethan’s Response: “Diversity & Comics doesn’t push a far right agenda, it pushes a mainstream right wing agenda, and in my personal life, so do I. And both sides of the fence troll each other. Political views are so polarized these days, and the culture is becoming toxic on both sides.”

BuzzFeed Allegation: That you are positioning yourself as the victim of trolling campaigns to gain a far-right fanbase

Ethan’s Response: “I am in the middle of an enormous culture war that I have learned from recent experience I have zero control over. I am trying to protect myself and my family from further victimization and targeting by radicals. I am trying to bring peace through conversation. I demand that my family has privacy and safety, during what seems to me very much like coordinated assault on my livelihood.”