After DC Comics released their latest Social Media Guidelines, comic book veteran Patrick Zircher declared he was going to deactivate his Twitter account. He didn’t give a specific reason as to why he was deactivating his account, but he did say it was “just a break.” He also said he was re-focusing how he spends his time.

I'm going to deactivate my account for a while.
No drama, just a break. A re-focusing of how I spend my time.

Zircher has worked for both Marvel and DC Comics. He most recently has been working on DC’s Action Comics. However, the news of him leaving Twitter after the social media guidelines email from DC was reason enough for Bleeding Cool’s Rich Johnston to insinuate he was a member of the “Alt-Right.” This isn’t the first time Johnston has tried to label comic book creators as Alt-Right. He previously targeted Cable artist John Malin and he’s written a number of articles attacking DC Comics artist Ethan Van Sciver.

Johnston included Zircher’s tweet followed by a scathing quote by Tim Doyle, a ringleader in the attacks against Ethan Van Sciver. Johnston then includes an anonymous question from a DC Creator who asks, “This is the only reaction to a veteran DC artist publicly fraternizing with the alt right and targeting minorities?”

While it’s not a direct reference to Zircher, it’s clearly easy to see how it could be interpreted that way. Zircher definitely saw it as Johnston besmirching his name and associating him with the Alt-Right.

I read an article today that said I fraternize with the alt-right.
I'm a Dem.
What I did do was unblock everyone & suggest we stop fighting with readers, I didn't specify right or left, certainly not alt-right.

Such an article is irresponsible and more than a little vicious.

Zircher then went on to request Johnston amend his article.

Please amend it. Since you released it I have already read comments describing me as alt-right and a difference of opinion between Jamal Igle and I, conflated to 'attacks minorities'.
What you write affects people's perspective, impacts people's lives.
Thank you, Rich. https://t.co/SuibshV2kS

In Johnston’s defense, he does amend the article by deleting the anonymous quote. But if you remember, Jon Malin made the same request of Rich Johnston. Johnston refused to amend the article. Johnston also says he will not amend any of his attack pieces against Ethan Van Sciver. 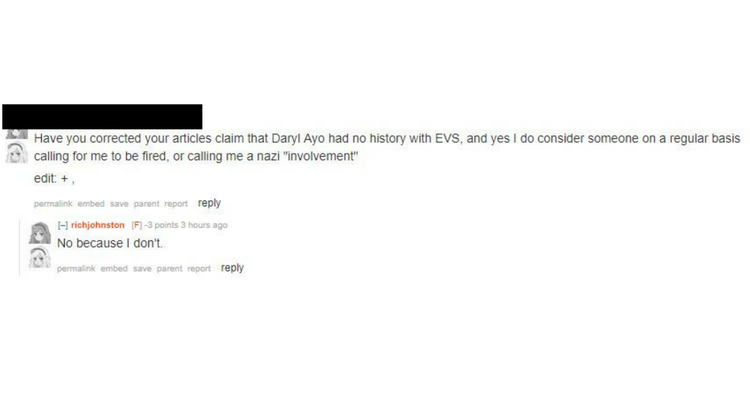 Even with Johnston amending the article, Zircher still questioned why his Tweet was even included in the article.

I don't know why this is a story at all. I deactivated my account & a LOT of assumptions were made.
I've never discussed DC's Social Media Guidelines w/ anyone.
I DO have to draw 25 comic pgs in the next 30 or so days & emailed my editor I was making changes to accommodate that. https://t.co/57ggbCf9kp

I follow people who were raked over the coals, unfairly, on social media.
Those with an ax to grind are nosy, unforgiving, exaggerate, or simply lie. They spread it to other ax-wielders.
Fiction isn't separated from fact, personal lives aren't separated from professional. https://t.co/7YY9xDyQ2i

There are also people who are fair, reasonable, and patient on both sides.
That seems like the most difficult thing to convince anyone of.

Insinuating people follow a certain ideology or even accusing them of activities without providing any evidence to support that claim is extremely dangerous. People’s livelihood and their families can be affected. We saw this play out with Will Caligan and Short Fuse Media. Caligan lost his job at Short Fuse Media because of his personal, conservative beliefs. Beliefs that many Americans hold and should not be condemned, but instead should be respected just like the beliefs of liberals.

Rich Johnston knows full well that creating witch hunts and labeling people like Patrick Zircher, Jon Malin, and Ethan Van Sciver as Alt Right can adversely affect their career or even cost them to lose their jobs. There is no evidence to show any of these artists are Alt-Right. Jon Malin confirmed he voted for Barack Obama in 2008, Patrick Zircher says he is a Democrat, and Ethan Van Sciver is a mainstream Republican.

Rich Johnston is playing with fire, he should be careful he doesn’t get too close and it burns him.