DC Comics is making some creative changes to their ongoing Nightwing title. Nightwing writer Tim Seeley had a long run on the issue. Seeley was replaced by Sam Humphries on Nightwing #35 and was joined by Bernard Chang on art duties.

But beginning with Nightwing #44 in May, Benjamin Percy will take over writing duties. He will be joined by acclaimed artist Christopher Mooneyham. Percy has been a DC Comics staple over the past few years. He made his debut with Detective Comics then launched Green Arrow in Rebirth and has spent the last two years “happily inhabiting the disturbed mind of Damian Wayne for Teen Titans.”

The best way to approach NIGHTWING is as a high-octane, adrenaline-fueled mystery and adventure,” says Benjamin Percy on his new assignment. “I’m going to crank up the volume on that world, dose it full of steroids and poison, and dream up a digital nightmare that will ultimately impact the entire DCU.”

His first arc, “The Bleeding Edge,” is expected to lay the groundwork for a major threat to the DC Universe. A new technologist has set his sights on Blüdhaven. This new villain will create a holographic, interconnected city where everyone is an individual and part of a larger network. DC describes it as “the internet made physical.” There also appears to be a social aspect to the story as this new holographic, interconnected city is described as “gentrification on gigabyte-laced steroids.” Nightwing will uncover a sinister plot that’s come for a reckoning.

Percy elaborates on why Nightwing is the perfect hero for this new threat, “it is ironically Nightwing’s off-the-radar status that makes him the ideal detective for the case.” 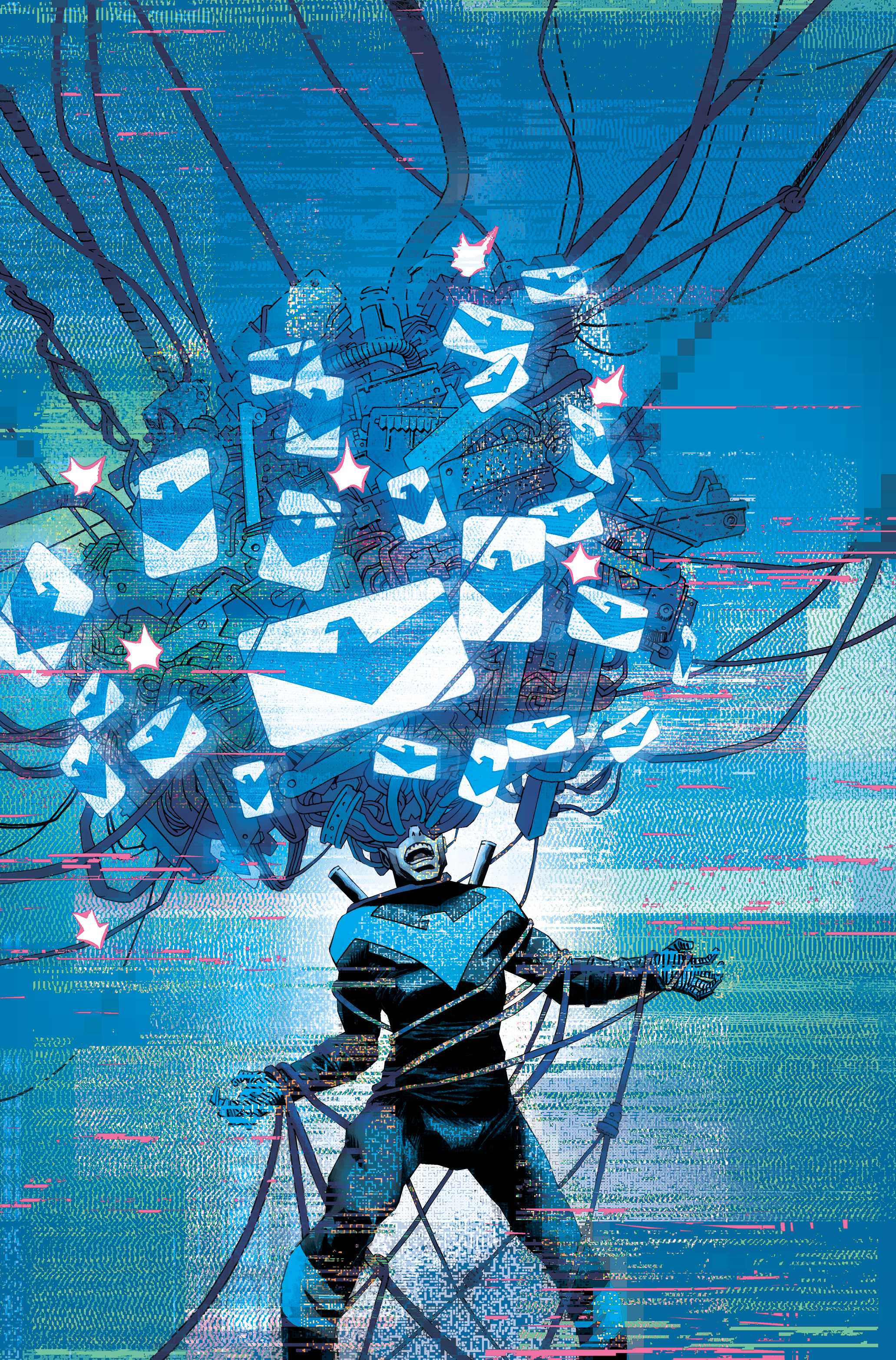 He’s also excited to delve into Gotham and Blüdhaven, “Consider how Gotham and Blüdhaven are shadow-soaked, crime-ridden environments. One of the things I love about Nightwing is his irrepressible optimism. This joy—a love of the game, a showman’s theatricality—is tonally essential to my approach. I see it as a necessary counterweight to material that might otherwise feel oppressively grim. In this way, Grayson really captures the hopeful maxim that has defined the Rebirth era.”

Not only did Percy have high praise for Nightwing, he also showered Christopher Mooneyham in it, “He’s got a tight line, cinematic vision, and can ground one moment in emotional realism and elevate the next to eye-popping levels of super-heroic awesomeness.”

Nightwing #44 will arrive in stores on May 2, 2018. The book will feature covers by Declan Shalvey and variants by Yasmine Putri.