Marvel’s Infinity Countdown Prime #1 by Gerry Duggan and Mike Deodato Jr. has finally arrived and the hunt for the Infinity Stones is off to a torrid pace. Wolverine controls the Space Stone. The Guardians of the Galaxy protect the monstrous Power Stone, and Magus wields the Soul Stone as revealed in Infinity Countdown: Adam Warlock #1.  That just leaves the Time Stone, the Reality Stone, and the Mind Stone.

Duggan and Deodato Jr. reveal the wielder of the Reality Stone, but they also throw in a big twist. Captain Marvel has discovered the Reality Stone despite it not being in the actual main reality. 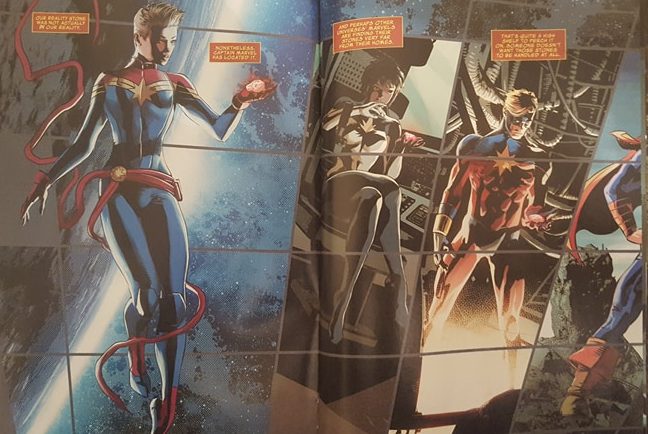 In fact, there’s more than one Reality Stone. Marvel reintroduces both Mar-Vell and Monica Rambeau or Spectrum back to the Marvel Universe. However, they appear to be operating in alternate realities. Nevertheless, they each control Reality Stones. There also appears to be a fourth figure who may control their own Reality Stone, but either by way of Duggan’s script or Deodato’s inventive art style, we only get a glimpse of the character with blue pants, red boots, red arm guards, and a flowing red cap with yellow on the back. It’s almost looks like Superman.

This is quite a surprise to see the original Captain Marvel return to the Marvel Universe. The last we saw of Mar-Vell, he sacrificed himself to the Phoenix Force in order to spare the Kree people. The Phoenix Force reclaimed its energies from Mar-Vell’s body and left his lifeless body left on a planet with plant life growing around.

Meanwhile Spectrum has actually been operating in the main reality. She joined the Ultimates following the events of Civil War II. Despite the team getting disbanded, they remained in operation in secret and even served at the behest of Galactus in order to discover who had imprisoned Eternity. While solving the mystery of who jailed Eternity, the Ultimates were absorbed into Alpha Flight and allowed to operate as a sanctioned team.

Are you glad to see Mar-Vell and Spectrum back in action and with Reality Stones to boot?