SYFY is ramping up their promotion of their Superman prequel, Krypton, by giving us our first look at the famed Superman villain, Brainiac.

David S. Goyer reveals Brainiac will be the big bad in the upcoming first season of Krypton. DC Entertainment’s Chief Creative Officer Geoff Johns even mentions the character we will see in Krypton is influenced by his take on Brainiac in Action Comics #866-870 with artist Gary Frank.

Johns describes Brianiac as “colder and more emotionally distant and ancient. And that version of Brainiac did heavily influence what we are doing on the show. And this crazy skull ship which is really cool and iconic.” 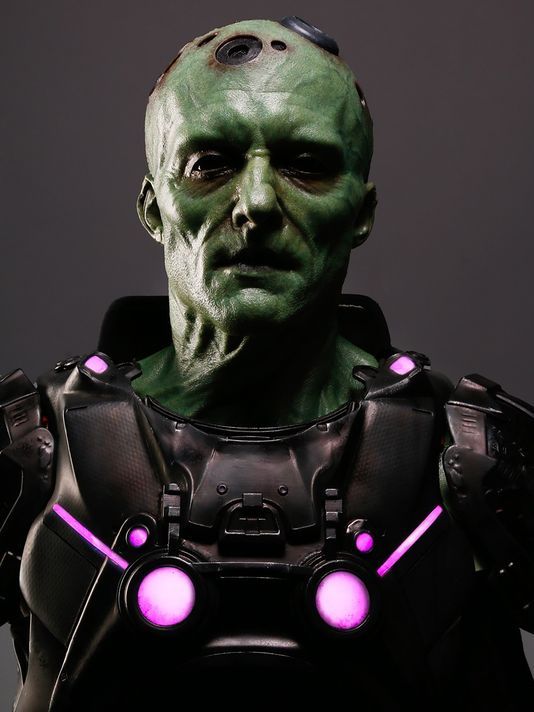 Brainiac will be played by British actor Blake Riston and he had quite a bit to say on just who Brainiac will be in Krypton. He compared the notorious Superman villain to Noah from the Bible.

“Yes, he traverses the universe in a gigantic skull ship, ripping cities out of planets, miniaturizing them and placing them on board. But he does so in the spirit of conservation. n his mind, he’s committed to the ultimate philanthropic act: saving all of creation. In many ways it’s analogous to Noah plucking out two of every animal to ensure their survival, even while knowing that others must perish.”

Ritson is no stranger to playing a villain. He played Count Riario in Starz’s Da Vinci’s Demons and he looks to bring that experience to play with Brainiac.

“I’ve played characters who’ve objectively committed monstrous actions, but feel entirely justified, as they’ve acted from a misplaced sense of a noble cause. Generally speaking, people cast themselves as the hero in their own narrative.”

But his acting skills are only part of the job. Bringing Brainiac to life also takes a dedicated costume team. On some days it could take him over seven hours to get fully suited up. But he said it was worth it.

“It’s chillingly effective. The first week I turned a corner and one of the cast (members) who hadn’t seen the makeup before screamed. A few days later, one of the crew dropped their lunch when they saw me for the first time. Then I knew that we were really on the right track.”

I really like the look. He looks horrifying and straight up evil. Plus, the voice acting he does sounds awesome. He just drips evil.

What do you think? Are you a fan?

Krypton will take place 200 years before Superman makes his way to Earth. The show will focus on Superman’s grandfather, Seg-El, played by Cameron Cuffe. He must struggle with the politics of Kandor City to reclaim the honor of the House of El. Aiding him with his struggles will be time traveler Adam Strange played by Shaun Sipos, who inspires Seg-El with his knowledge of Superman, but also warns him of the impending danger in the form of Brainiac.