Marvel Comics May Soliciations have finally arrived and they include recently announced Avengers #1, Black Panther #1, and Venom #1.

However, the solicitaitons also include a brand new series Quicksilver: No Surrender. This new series will be written by Saladin Ahmed with art by Eric Nguyen with covers by Martin Simmonds, Pepe Larraz, and Greg Land. 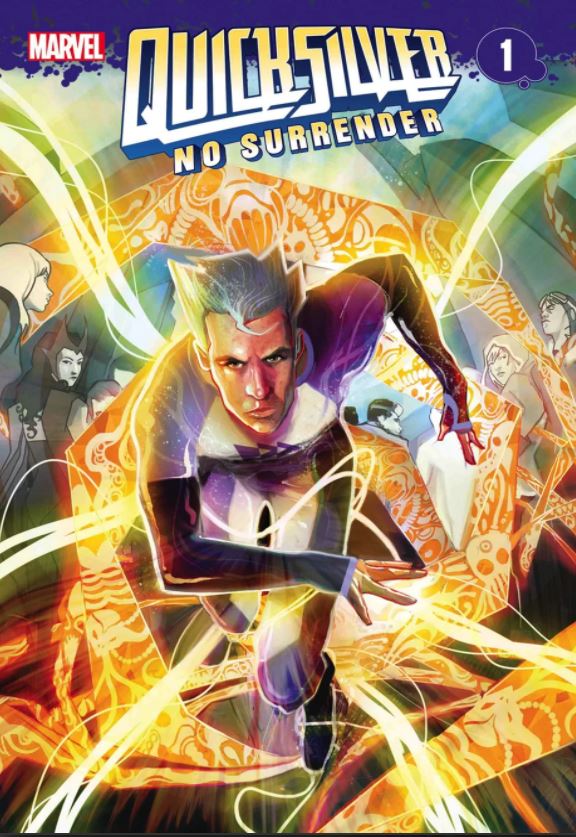 QUICKSILVER: NO SURRENDER #1 (of 5)
SALADIN AHMED (W) • ERIC NGUYEN (A)
COVER BY MARTIN SIMMONDS
Variant Cover by Pepe Larraz
DEADPOOL VARIANT COVER BY GREG LAND
RACING OUT OF THE PAGES OF “AVENGERS: NO SURRENDER”!
• Quicksilver’s super-speed and abrasive personality have always isolated him, but he’s never been truly alone…until now.
• Trapped beyond the perception of friends, family and allies, Quicksilver wages a one-man guerilla war against a monster that he’s not even sure is real, to save a world that he may never be a part of again.
• Saladin Ahmed (BLACK BOLT) and Eric Nguyen (OLD MAN LOGAN) team up to bring you a psychedelic survival thriller unlike anything you’ve seen before!
32 PGS./Rated T+ …$3.99 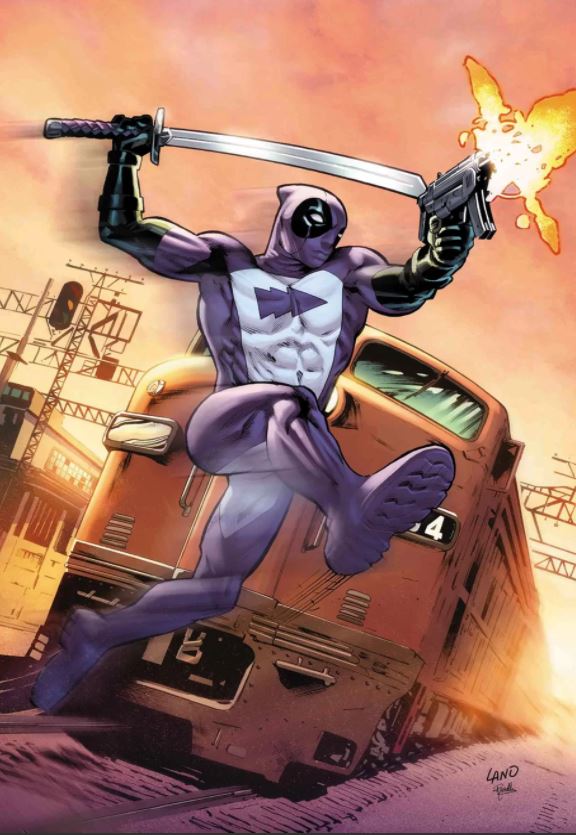 Along with this Quicksilver series, Jonathan Hickman will return to Marvel with S.H.I.E.L.D.: The Rebirth #1. 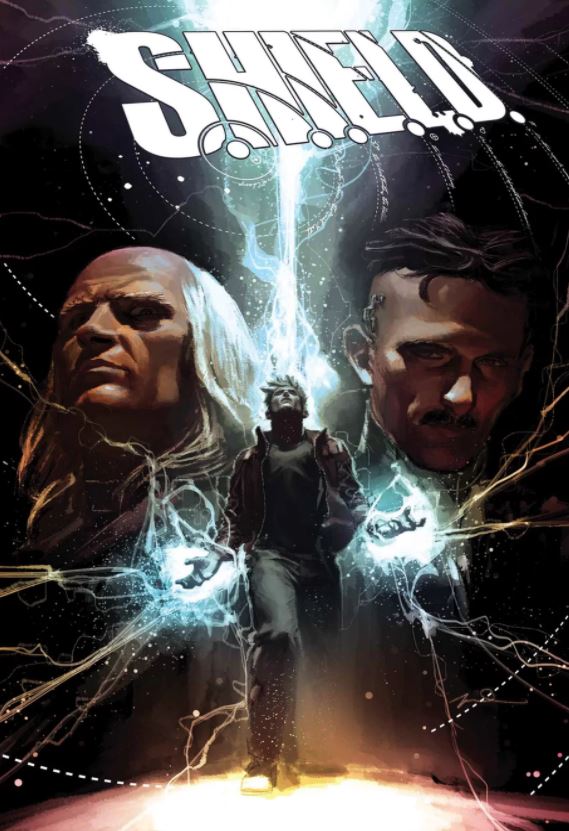 S.H.I.E.L.D. BY HICKMAN & WEAVER: THE REBIRTH #1
JONATHAN HICKMAN (W) • DUSTIN WEAVER (A)
Cover by GERALD PAREL
Delve deeper into the hidden past of S.H.I.E.L.D. — along with some of history’s greatest minds! Michelangelo has been pulling the strings for years, and is now becoming the prime mover. Can he keep Leonardo Da Vinci and Isaac Newton from killing each other and destroying the Brotherhood of the Shield? The battle for the Immortal City comes to a climactic conclusion! Leonid makes his choice between two fathers! Michelangelo and Nikola Tesla kick their plan into high gear! Galileo takes on Galactus — long before the Fantastic Four did! The truth behind Nostrodamus stands revealed! And Howard Stark lays the foundation for the espionage organization you know and love! Catch up on Jonathan Hickman and Dustin Weaver’s secretive S.H.I.E.L.D. saga — before the eagerly anticipated finale! Collecting S.H.I.E.L.D. (2011) #1-4.
96 PGS./Rated T+ …$5.99

Along with this new title, Hickman and Dustin Weaver will conclude their S.H.I.E.L.D. miniseries with issues five and six. 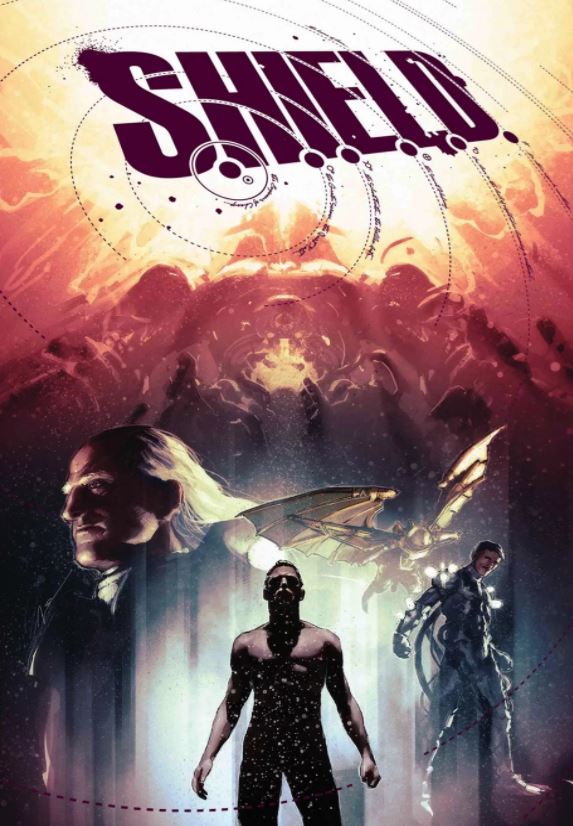 S.H.I.E.L.D. BY HICKMAN & WEAVER #5 & 6
JONATHAN HICKMAN (W) • DUSTIN WEAVER (A)
CoverS by GERALD PAREL
JONATHAN HICKMAN & DUSTIN WEAVER’S UNFINISHED EPIC GETS ITS CONCLUSION!
• Jonathan Hickman and Dustin Weaver’s unfinished epic of 2010-2011 finally gets its conclusion!
• The Brotherhood of the Shield is made of the likes of Da Vinci, Stark, Tesla and Richards, but they’re in trouble.
• Sir Issac Newton stands with his foot on the world’s throat and no one can stop him!
• The battle that decides our present is waged in the future!
32 PGS. (EACH)/Rated T+ …$3.99 (EACH) 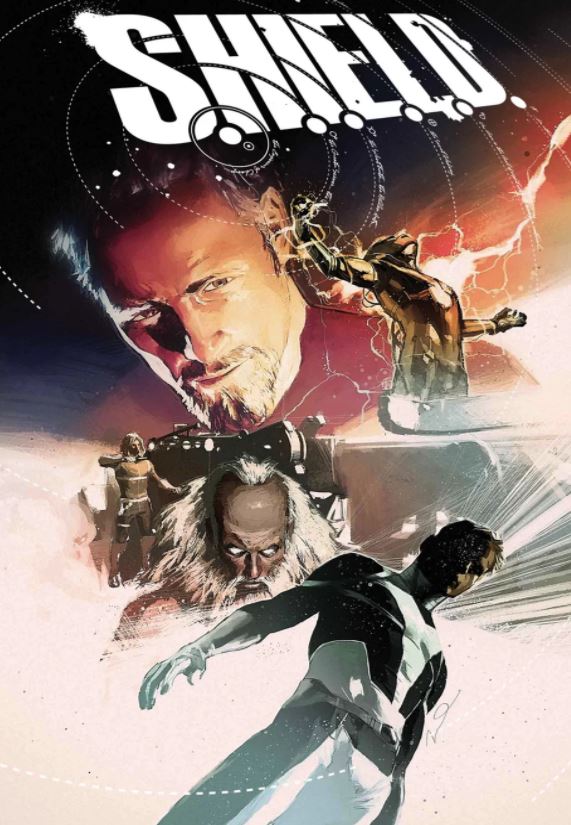 There will also be a brand new Thor title, Mighty Thor: At the Gates of Valhalla. It will be written by Jason Aaron with art by Ramon Perez and Jen Bartel and covers by Nick Derington and Ron Garney. 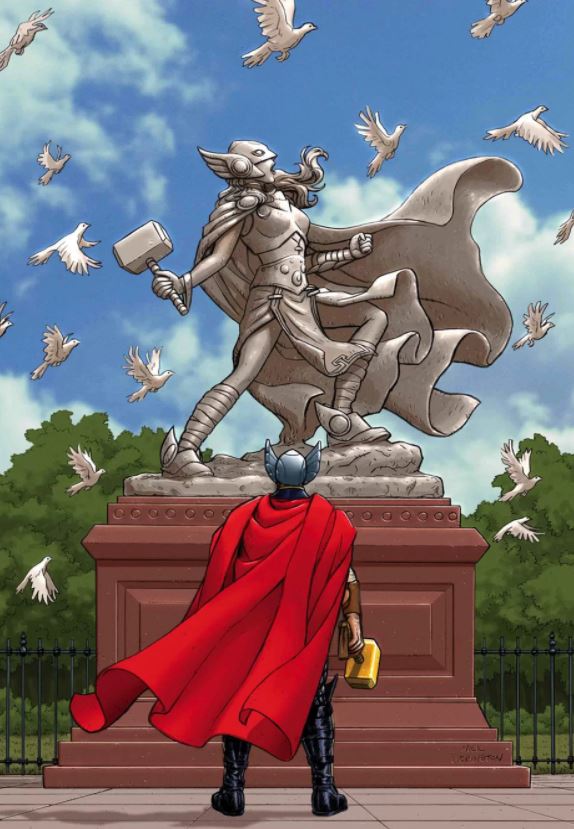 MIGHTY THOR: AT THE GATES OF VALHALLA #1
JASON AARON (W) • RAMÓN PÉREZ AND JEN BARTEL (A)
COVER BY NICK DERINGTON
VARIANT COVER BY Ron Garney
THE LAST GOODBYE!
“The Death of the Mighty Thor” has come and gone. But Jane Foster’s power to inspire lives on — even in the far future! Don’t miss the tribute to Jason Aaron’s epic tale of Thor and the mighty hammer Mjolnir, drawn by rising star Jen Bartel!
And with or without a Thor, the War of Realms continues. As Malekith’s power grows, the realms will fall — and who is left to stop him? Eisner Award–winning artist Ramón Pérez kicks off the next stage of Jason Aaron’s ongoing saga.
40 PGS./ONE SHOT/Rated T …$4.99

There will also be an X-Men Red Annual just after four issues. The Annual is supposed to be set inbetween Phoenix Resurrection and the first issue of X-Men Red. 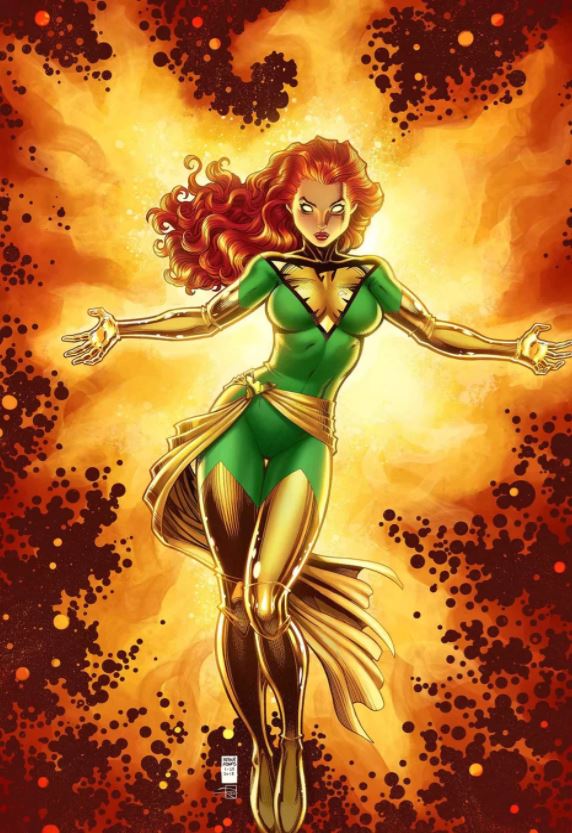 X-Men RED ANNUAL #1
Tom Taylor (W) • Pascal Alixe (A)
Cover by Travis Charest
VARIANT COVER BY ARTHUR ADAMS
VARIANT COVER BY TBA
After Resurrection. Before Red. Jean Grey was reborn in a world that had changed. Her friends and family had lived lives. Some had lost lives. This is Jean’s story of catching up losses and triumphs. Reconnecting with old colleagues, grieving for those lots, and meeting family members she didn’t know existed.
32 PGS./Rated T+ …$3.99 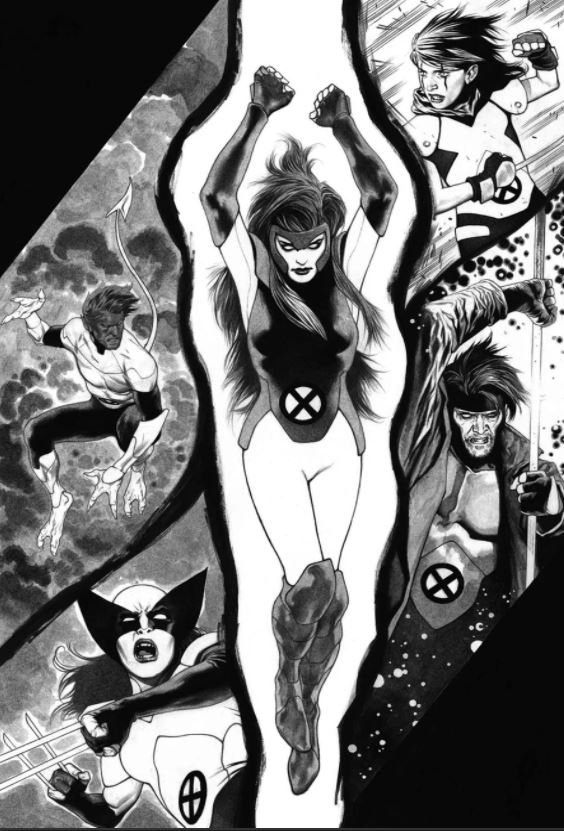 That’s most of the new stuff. What stuck out with some of the ongoing titles is Mark Waid’s Captain America #701 and #702. Chris Samnee looks like he will be off the book already as Leonardo Romero will take over main art duties. He will be joined by JG Jones, Adam Hughes, Howard Chaykin, and Chris Sprouse. And it looks like Waid is already kicking Steve Rogers to the curb. Captain America #701 will start a new story arc “Promised Land” that will see Steve Rogers’s grandson living in Steve Rogers’ utopian America, one can only wonder what that will be… 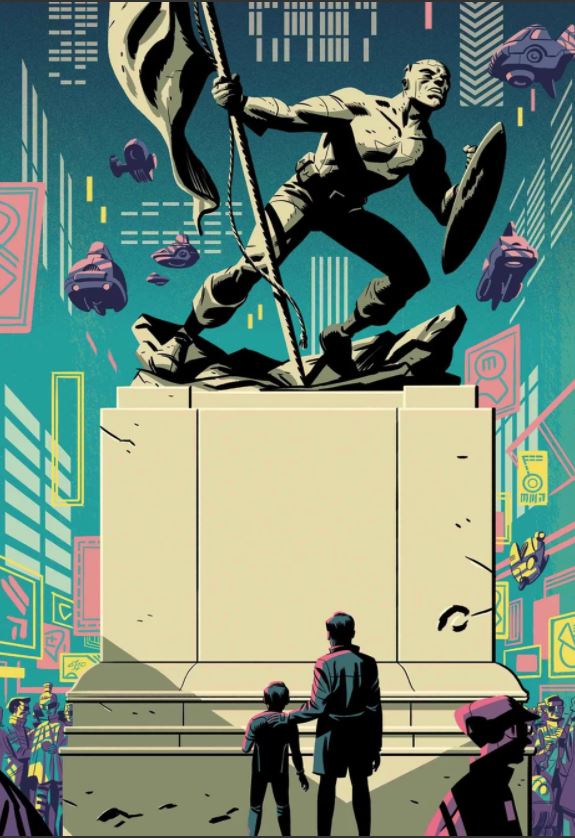 CAPTAIN AMERICA #701
MARK WAID (W)
LEONARDO ROMERO with JG JONES and ADAM HUGHES (A)
Cover by MICHAEL CHO
CONNECTING VARIANT COVER BY JULIAN TOTINO TEDESCO (1 OF 4)
DEADPOOL VARIANT COVER BY DAVID NAKAYAMA
PROMISED LAND Part 1
The year is 2314, and the grandson of Steve Rogers lives in the utopian America of which his ancestor dreamed. The legacy of Captain America has been realized — but something sinister lies beneath the surface! Leonardo Romero (HAWKEYE) joins Mark Waid for this very special look into the tomorrow of Captain America, featuring guest contributions from notable artists past and present!
32 PGS./Rated T+ …$3.99

And here’s the solicit for Captain America #702:

CAPTAIN AMERICA #702
MARK WAID (W)
LEONARDO ROMERO with HOWARD CHAYKIN and CHRIS SPROUSE (A)
Cover by MICHAEL CHO
YOUNG GUN VARIANT COVER BY PEPE LARRAZ
CONNECTING VARIANT COVER BY JULIAN TOTINO TEDESCO (2 OF 4)
PROMISED LAND Part 2
The quest to save his son leads Jack Rogers into the bowels of the Earth, far from the idyllic surface — and a meeting with the descendant of another notable Marvel hero!
32 PGS./Rated T+ …$3.99

Marvel will also be launching a new Star Wars one shot featuring Tag and Bink just in time for their live action debut in Solo: A Star Wars Story. 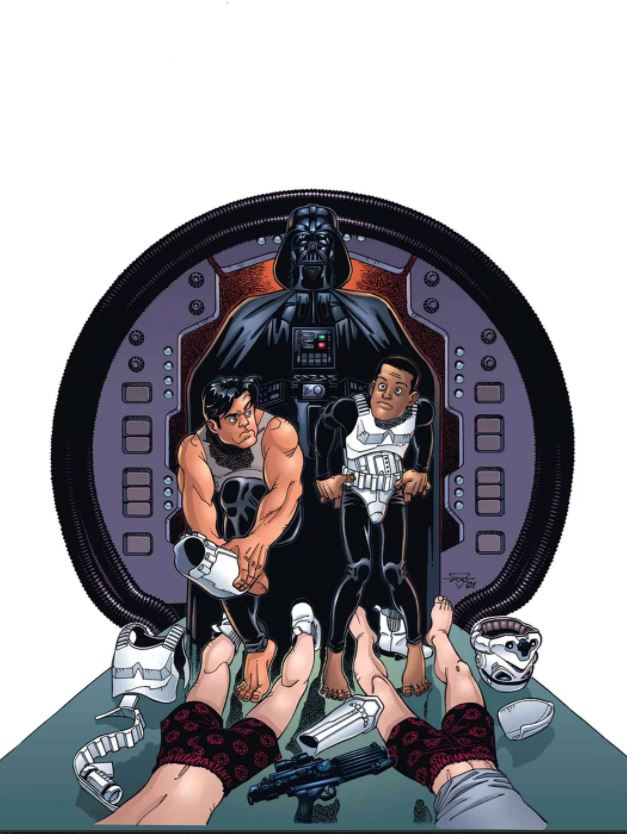 STAR WARS: TAG & BINK WERE HERE #1
KEVIN RUBIO (W) • LUCAS MARANGON & RICK ZOMBO (A)
Cover by LUCAS MARANGON
They’re the most important Star Wars characters you never knew existed — until now! Tag Greenley and Bink Otauna were on Leia’s ship carrying the Death Star plans — when Darth Vader changed their lives forever! But as their true roles in this epic saga are revealed, whose side are Tag and Bink on, anyway? The hapless duo’s fateful adventures will take them all the way from Tatooine to Cloud City to Endor — and bring them face-to-face with Lando Calrissian, Boba Fett and more! But every great tale has a prequel — so what were Tag and Bink up to when the Clone Wars began? Prepare to discover their uncanny origin! We have a bad feeling about this! Collecting STAR WARS: TAG & BINK ARE DEAD #1-2, STAR WARS: TAG & BINK II #1-2 and material from STAR WARS TALES #12.
104 PGS./Rated T …$7.99
Star Wars © Lucasfilm Ltd. & TM. All rights reserved. Used under authorization. Text and illustrations for Star Wars are © 2018 Lucasfilm Ltd.

Along with this one shot, Marvel will release a new miniseries featuring Lando. This new Lando story will be set during the time of Solo: A Star Wars Story. 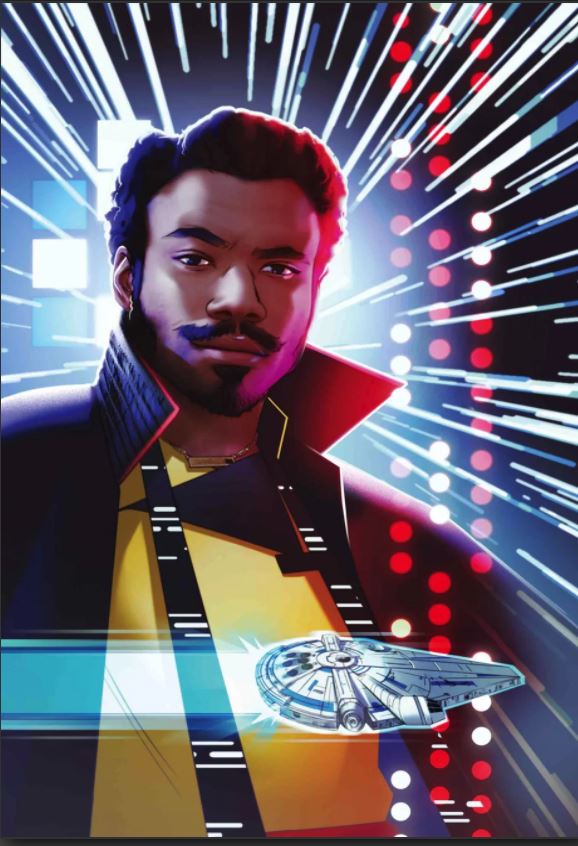 STAR WARS: LANDO – DOUBLE OR NOTHING #1 (of 5)
RODNEY BARNES (W) • Paolo Villanelli (A)
Cover by W. SCOTT FORBES
Variant Cover by Joe Quinones
ACTION FIGURE VARIANT COVER BY JOHN TYLER CHRISTOPHER
MOVIE VARIANT COVERS A & B ALSO AVAILABLE
Straight from the frames of the highly-anticipated film SOLO: A STAR WARS STORY swaggers a younger and somehow even cockier Lando Calrissian! Before his days in the Rebellion, before he ran Cloud City, even before he lost the Millenium Falcon, comes this tale of Lando’s adventures and misadventures in search of love and money leading right up to his appearance in SOLO!
32 PGS./Rated T …$3.99
Star Wars © Lucasfilm Ltd. & TM. All rights reserved. Used under authorization. Text and illustrations for Star Wars are © 2018 Lucasfilm Ltd.

I’m really interested in this Lando story. I loved the first miniseries by Charles Soule. I think it is one of Marvel’s better Star Wars series. Everything else just looks lackluster to me. I’ll probably grab that X-Men: Red Annual because I would have liked to see Jean transition back into a member of the X-Men instead of just jumping right into it in X-Men: Red #1.

What do you make of Marvel’s May solicitations?