Mera is one of the fiercest warriors in the DC Universe. Where Arthur Curry, her husband, is known for some cool abilities it’s Mera that truly wields the water. Aquakinesis is the ability to manipulate water with your mind. Something Mera does incredibly well. But she’s much more than some water-psychic. She’s the Queen of Atlantis. Royalty and wife to one of the most powerful men on the planet.

Unfortunately, due to some magic tomfoolery, Mera is in exile. She cannot survive underwater at the moment. A terrible and vulnerable life for a person of Atlantis. But Mera is no ordinary person. Writer Dan Abnett introduces Mera by having her showcase her fantastic powers against a surprisingly powerful foe. It was a great way to demonstrate the state she’s in as well as just how effective her powers are. Even if they are weakened. 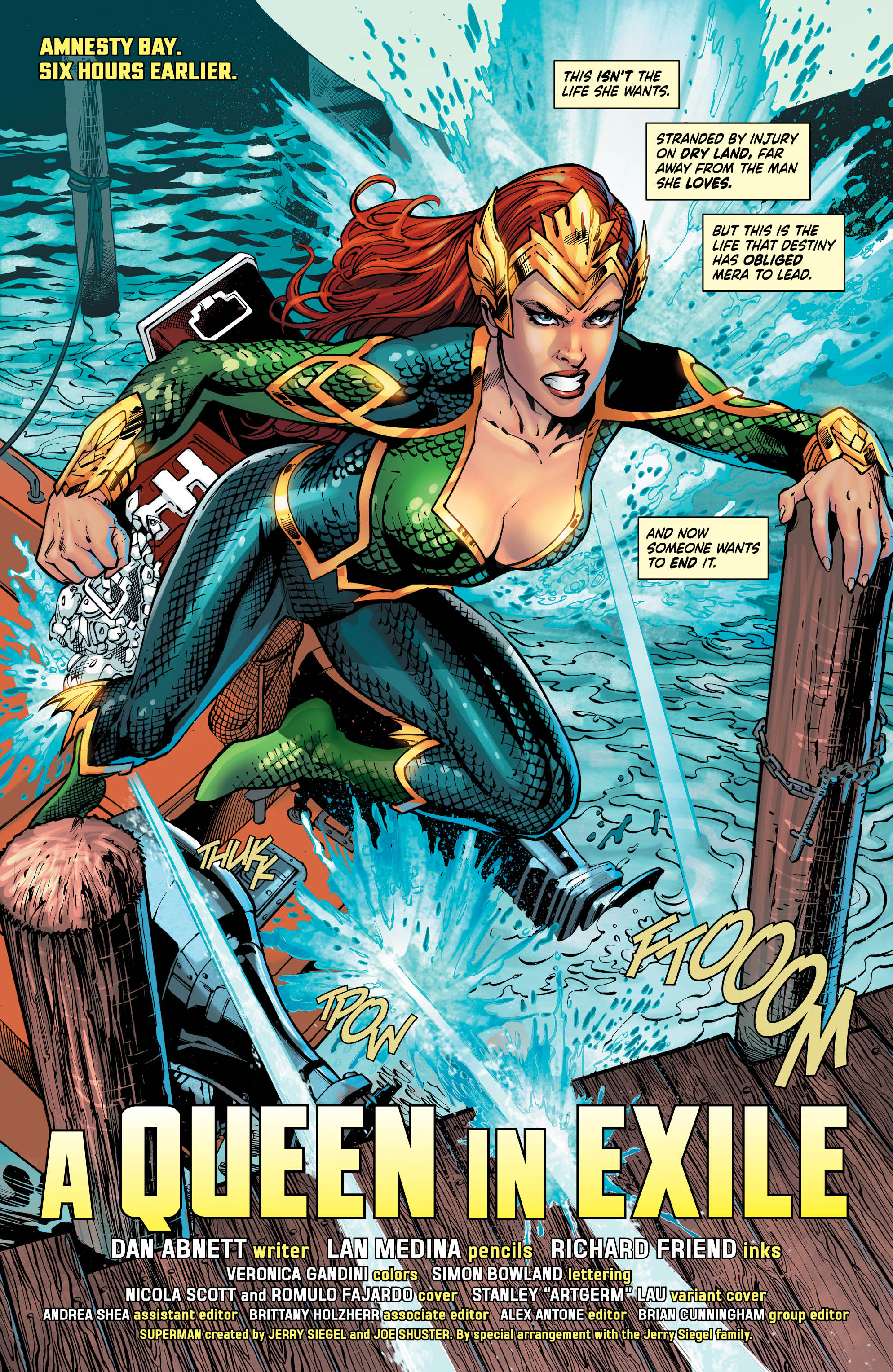 Mera: Queen of Atlantis #1 is a good beginning, but it could do with some polish. Some of the story elements feel as if corners are being cut. There aren’t many people for Mera to interact with and there doesn’t seem to be a place for her on the surface world. These are issues that weren’t always addressed in comics, but it feels weird to have a superhero just wandering the Earth with only occasional help from friends or the Justice League. But those are minor details. This is about showing just how powerful Mera: Queen of Atlantis is, with or without her beloved.

“Atlantis is fighting for its very identity.”

Atlantis is in trouble. Rath has taken over the throne. Arthur is there, fighting the good fight. But when Mera returned to help him she was damaged by Rath’s magic. She can’t breathe underwater; she is severely de-powered. But all is not lost. She proves herself more than capable when dealing with the first villain of her story. It’s a fun fight. One that doesn’t make Mera out to be some godlike character able to defeat anyone with water in their body. That wouldn’t be an interesting story. 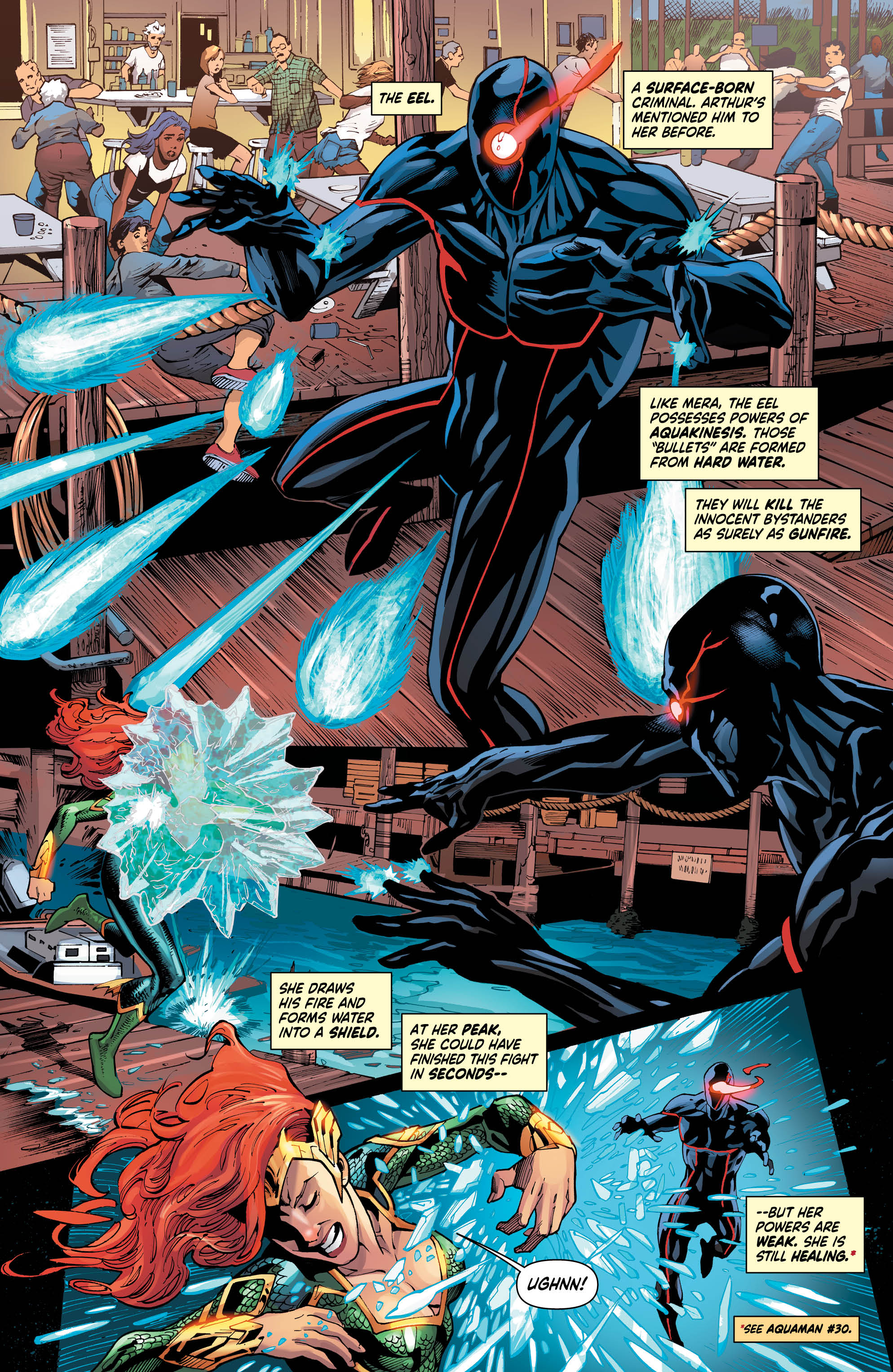 But the story spends a bit too much time talking about things that are more interesting than what readers are seeing. Superman, Wonder Woman, Mera and others discuss the happenings of Atlantis in a simple kitchen. It’s always a problem when characters are talking about interesting things, because that means they’re not doing interesting things. Unfortunately that’s one of the major issues with Mera: Queen of Atlantis #1. Writer Dan Abnett does a great job writing the characterization for Mera. This feels like her. But she doesn’t have much to do. Hopefully, her story gets an adrenaline boost with the next issue.

“She feels a rush. She has control again, if only for a second. And it’s empowering.”

Lan Medina is the artist for the series. His work is very reminiscent of Ivan Reis and Eber Ferreira, a clean and clear style with solid action and great design. The inks by Richard Friend and colors by Vero Gandini are well coupled with Medina. The world looks lively and bright, traits that always accompany Aquaman books. And as is the case with every Aquaman book, the issue looks its best when dealing with water. Whether it’s because the colorist gets to imagine a bit more or the inker gets to design a bit more, the flourishes of Mera’s water powers are the highlight of the issue. 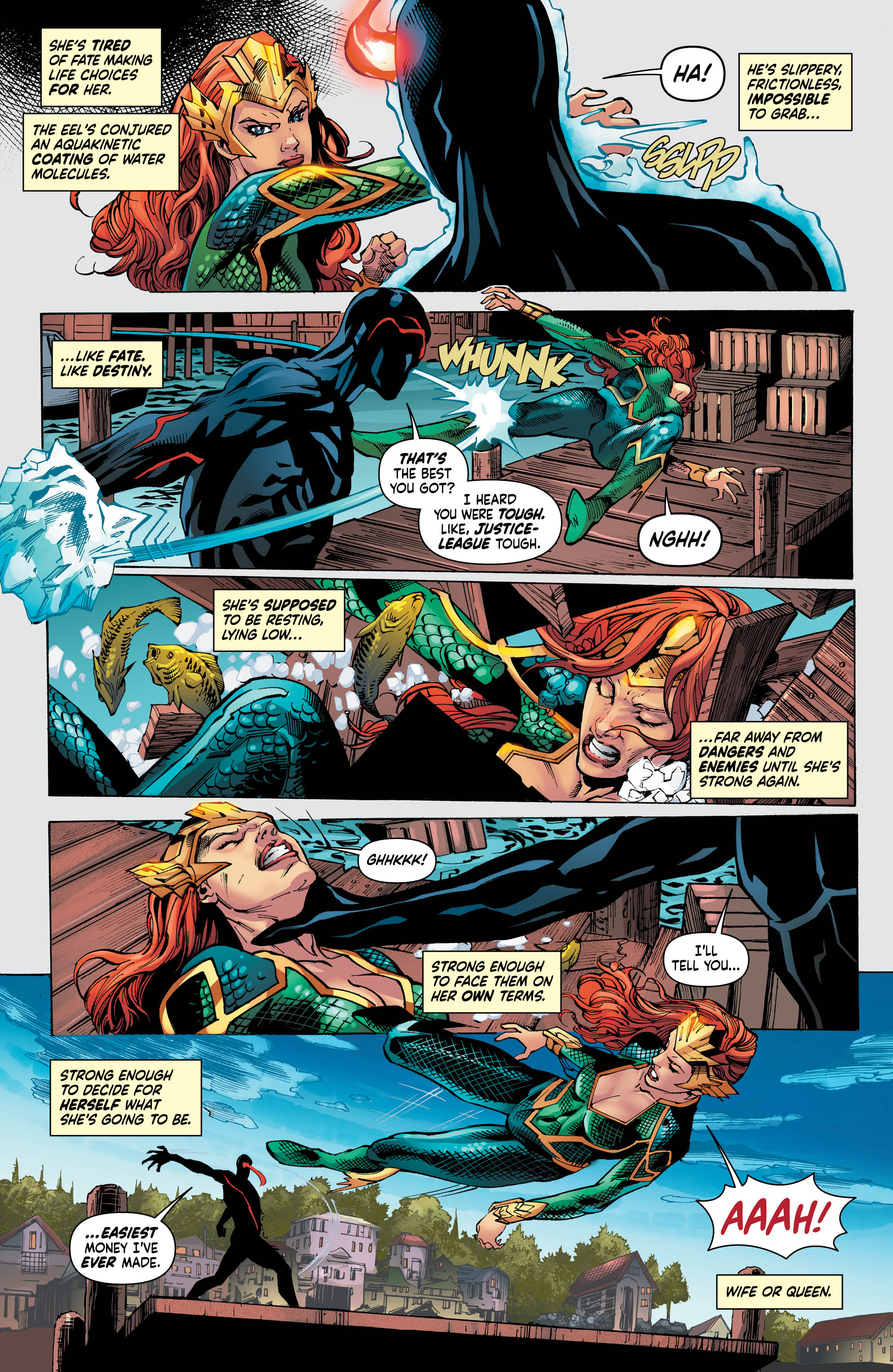 Considering the series is probably going to try and make Mera’s powers looks as awesome as possible, that’s a great thing. But there are a few issues here and there. Some of the anatomy can look a bit off as well as an expression or two. It won’t rip the reader out of the page but considering the highs DC books are hitting these days it feels unpolished.

Being out of her element isn’t good for Mera. She’s a child of Atlantis, one who needs the water. But sometimes those are the best stories. Ones that separate their main characters from what they believe defines them, so they can learn to be something more. Mera is more than a Queen of Atlantis. She is more than just an Aquatelekinetic. She’s a fierce warrior who fights for her people. A loving wife who would do anything for her husband, because she knows he would do anything for her. But this story isn’t about him, it’s about her.

Mera has needed her own series for some time. She’s got the temperament, wisdom, and fearlessness of a true superhero. She displays that fearlessness in Mera: Queen of Atlantis #1. She demonstrates just how powerful she can be even in her weakened state. But it doesn’t feel like enough. There isn’t much for her to do on the surface world and because of that it feels like both her, and the story, are lost. But a surprising figure looms in the background. His resurgence could mean a million different things for Mera, Arthur, and Atlantis. But it absolutely means there’s excitement up ahead.

Dan Abnett clearly knows and loves the character, he just needs to give her more to do. Anyone who knows Mera knows she loves and needs a good fight. Hopefully Mera: Queen of Atlantis gives her one.