Leaping from the pages of Dark Knights: Metal, Sideways is one of a few new DC titles trying to tell different stories. The writers behind this title are DC higher-up Dan DiDio and Justin Jordan, with Kenneth Rocafort listed as a storyteller as well as an artist. These new DC credits do seem much more fair to the artists, but they’re very confusing. But Sideways was designed as an answer to Spider-Man. A teenage superhero with new and interesting powers just looking to do some good. But that’s not all!

Derek James starts his superhero career with a bang. He’s got a great costume; he’s got great, portal-utilizing powers. All he needs is some exposure. At first, the hero only seemed interested in garnered internet fame. Now, he’s becoming one helluva hero.

Dan DiDio’s writing is always reminiscent of the late Jack Kirby. He likes big, ancient god-heads yelling ridiculous lines of dialogue at our heroes. It’s sometimes too ridiculous, but in Sideways #2 it’s undeniably awesome. This is the kind of comic Blue Beetle aspires to be. Already, James is an intriguing hero with motivation to fight. The end of the comic comes a bit too quickly. The big bad just falls into Sideway’s lap. But sometimes to get a hero started you just need to throw a villain at them. Dan DiDio, Justin Jordan, and Kenneth Rocafort are off to a great start. 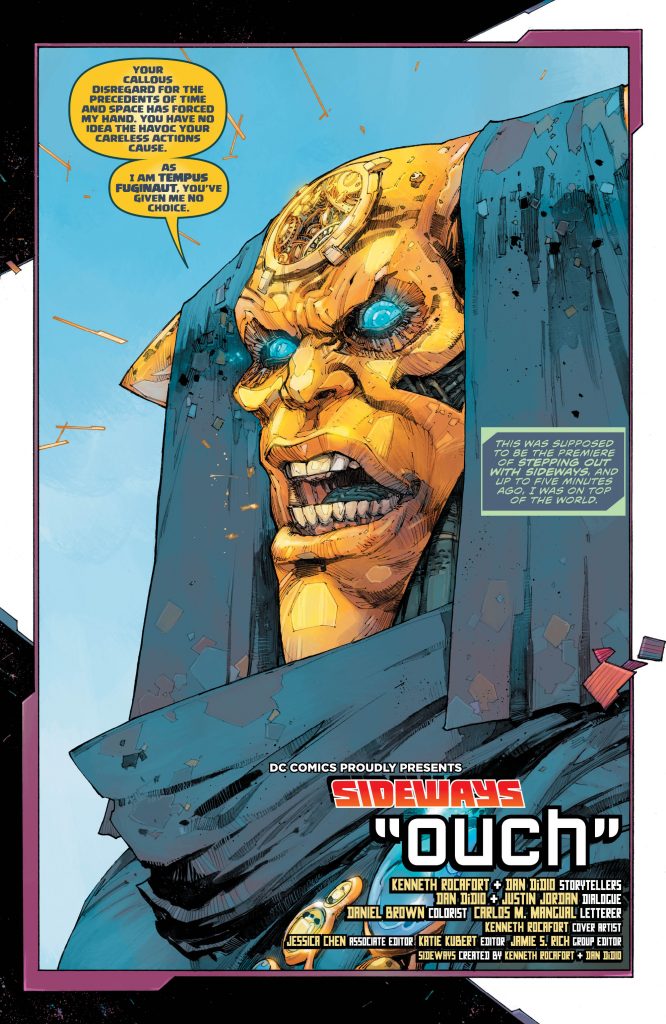 “The Galaxy is in complete harmony. Your death ensures it will remain that way.”

If something like Tempus Fuginaut, the foreign keeper of Time and Space, were yelling at you you’d be scared to! Fuginaut’s presence dampens James’ powers. James doesn’t quite have combat figured out yet, but he does know how to get away. Unfortunately, that was a little hard in this case. Putting your heroes through hell is a great way to give them some emotional growth. And guess what? That’s exactly what happens. Derek James started out as a snotty kid trying to take advantage of his situation, while doing a little good.

But all of that is gone by the end of the comic. All that’s left is a hero. Dan DiDio did a great job in bringing Justin Jordan in to help craft the dialogue. The characters feel fresh and modern, all while trying to tell a classic superhero story. While more time could be spent exploring Sideways’ new powers this is only just the beginning. Derek James has plenty of time to kick some butt with his new portal powers!

His backstory is a little on-the-nose. An orphan in a modern comic? It’s dated. But that doesn’t stop the scenes between Derek and his adopted Mother from being emotional and effective. A perfect example that under the right writers, any story can work. 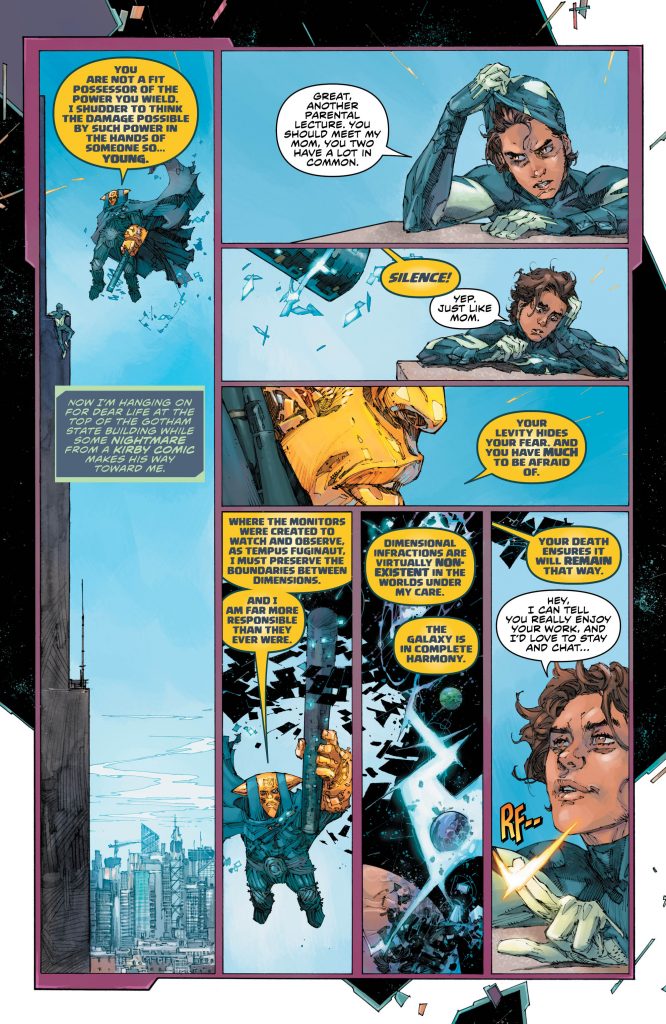 “Derek’s trying to be a YouTube star. And you know, failing.”

Kenneth Rocafort’s art is one of the highlights of the issue. He and Howard Porter always have a natural awesomeness and humor to their pencil-work. It’s almost indescribable. The nuance of exaggerated facial expressions or ornamented framing is something a lot of readers can miss. Most readers don’t spend time staring at the faces or designs of the pages of their comics. But they should.

Rocafort is one of those artists who pays special attention to the formation and purpose of every panel. This doesn’t just make every action clear, it makes it both cinematic and stylistic. When there’s an explosion it literally explodes out of the panels and into the very pages themselves. A small touch, but the purpose is to help draw you into the comic, and it works! Rocafort takes advantage of every asset in the story from the ridiculous figures and powers to the multiple settings and emotional scenes, the art perfectly brings every detail to life.

Rocafort wouldn’t succeed so easily if it weren’t for the talents of colorist Daniel Brown. Rocafort’s art isn’t necessarily difficult to color, but Brown goes above and beyond to accentuate every one of Rocafort’s unique details. They make a great team that hopefully will continue bringing Sideways to life.

Comic book teens seem to get themselves into all kinds of trouble. They get bitten by something or attacked by something and are somehow imbued with magical powers. Just what would that kid do with those powers? That’s what the comics really explore, and it’s what separates the good from the bad. Heroes from villains. At first, Derek James just wanted to get a little YouTube stardom. That doesn’t last long. Becoming a hero was always the intention, but it wasn’t the focus. But if you hurt a character’s family, bad things are bound to happen.

Derek James gets his superhero career started quickly. He’s already been beaten to a pulp, put back together, and run off to fight another battle. He’s been thrown through the ringer! But that also shows the character’s resolve. It makes readers want to root for him and read more about him. Sideways #2 does that and then some. The last page is everything a reader should want from a comic. A perfect cap to the previous pages and a promise of more to come in the next issue.

Writers Dan DiDio and Justin Jordan give Kenneth Rocafort a great story to illustrate. A funny and action-packed introduction for an intriguing new hero in DC’s already-packed line-up. While Sideways might night become DC’s Spider-Man, he just might become a great superhero.