If you’ve been somewhat out of the loop, Marvel Studios released their latest Avengers: Infinity War trailer today. You can view the trailer here:

Let’s try to break this down. The trailer begins in New York, with that Black Panther Kilmonger upside down shot as we are getting a birds eye view of the city. But something burns bright at the top corner of the frame. This shot almost serves as a response to the first trailer, where we got the view of an orange hued, alien planet filled with maelstroms of activity.

At this point, Gamora is narrating. She tells Tony Stark about her “father,” and his ultimate plan to wipe out half of all life in the universe. She’s saying this while we see cuts of various Avengers and locations being affected by the glowing object fast approaching earth. This is the Ring-like alien craft that was featured in the first trailer. Black Widow, Bruce Banner and War Machine look up at it. The window of the Sanctum Sanctorum reflects it. Then we get a shot of Thanos placing the Space Stone into his gauntlet, like we saw in the first trailer.

Gamora appears on screen, and imitates the snap that was iconic in Jim Starlin’s Infinity Gauntlet storyline when Thanos wiped out half the universe. We get a shot of Tony Stark asking the name of the Mad Titan, and Gamora informs the audience. We get a new scene with the Mad Titan taking off his helmet. This might be a flashback, because we haven’t seen this version of his armor in any of the other films. 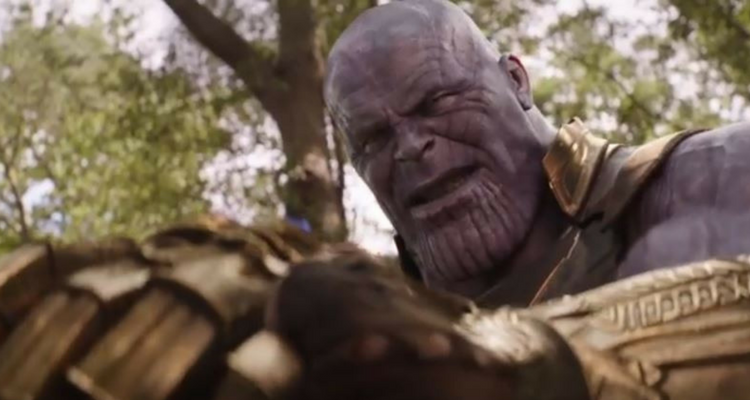 Lots of new clips that compliment the first trailer start filling the screen. It seems like three locations are featured in the movie: New York, Wakanda, and a yet-to-be-named alien planet, which is most likely Titan, Thanos’ home planet. Peter Parker puts on the Spider-Man mask and starts swinging off the bridge to face an imminent threat. Iron Man sports a new suit, and his feet morph into stronger rockets to take him into the upper atmosphere as he chases down an alien ship which might belong to Thanos. It’s possible it might be The Ebony Maw fleeing Earth after stealing the Time Stone from Doctor Strange.

Tony Stark narrates at this point. “He’s coming to us. We have what Thanos wants.”

Cut to clips of Doctor Strange activating the Eye of Agamotto. Then we get shots of Scarlett Witch looking distressed, and back at Vision who clearly looks defeated, but the Mind Stone still intact. Then we get an aerial shot of Wakanda, Black Panther statue and all, and then a clip of Captain America and Black Widow meeting up with T’Challa and the Dora Milajae. The procession line coming from the quinjet has more than just Steve Rogers and Natasha Romanoff. The zoomed out shot features Bruce Banner, James Rhodes, Sam Wilson, and Scarlett Witch and Vision hanging out in the back. We get another view of the Wakandan procession as Black Panther smiles back at Steve Rogers in an approving handshake. Okoye stands beside the King giving a sly, approving smirk. The trailer stays in Wakanda as we see Shuri analyzing Vision, and projecting a 3-D map of him through her beads.

Then we get a shot of the Guardians of the Galaxy stepping out from the Milano into some high tech hangar. This looks very similar to the leaked footage where the Guardians of the Galaxy have come calling on the Collector only to find him being tortured by Thanos. Quick cut to Stark, Drax, Spider-Man, and Peter Quill on the ruined alien planet. Star-Lord talks about Tony’s plan being good, but ultimately sucks, so he steps in with his supposedly better plan. Drax looks just as fed up with Quill’s yapping as Stark is.

Tom Holland’s Spider-Man might be breaking character because he just looks happy to be there.

Diving into the Mad Titan’s Past 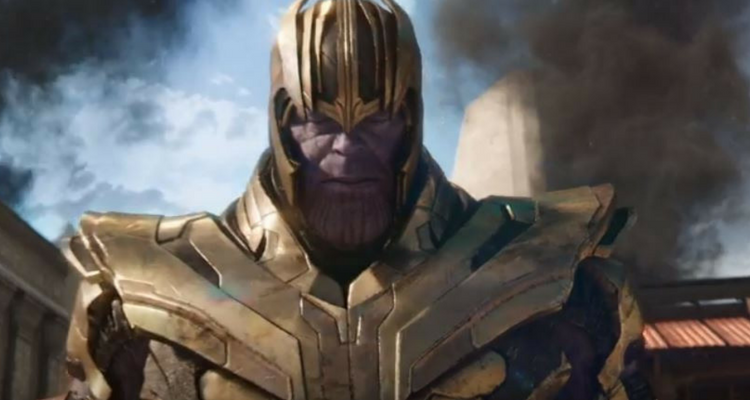 The action really starts picking up at this point. Wakandan troops are taken out from the city’s center, with Captain America, Black Widow, Black Panther, and Bucky in tow. We also get a shot of the new Hulkbuster armor (it might be Bruce Banner in the armor), with Falcon and War Machine flying past it in the background. The next shot is Thor with his epic cape, summoning the lightning in the hanger from a few scenes prior, with Rocket Raccoon and teenage Groot looking on. What’s really interesting about this scene is if you pause it, Thor isn’t holding anything in his hand. This is probably because Marvel is still trying to keep Thor’s new weapon a secret although a number of toys have indicated it is Stormbreaker. And if you look closely at Groot here, he only appears to have one arm potentially confirming he will give his other arm to create the weapon.

Then we are taken back to the alien planet, with the alien ship crashing through a structure. We get a scene of Thanos in his old-school armor, and I have no idea what he’s holding (sound off in the comments below!) My first thought is that it was a severed head, but this isn’t Netflix. It could be Cull Obsidian’s club from the comics. Thanos takes over the narration at this point. He talks about half of humanity still existing when he’s finished with it. We get some flashback scenes of him and a young Gamora, surrounded by an army of Chitauri, who seem to be holding back the people of her home planet while he takes her as tribute. 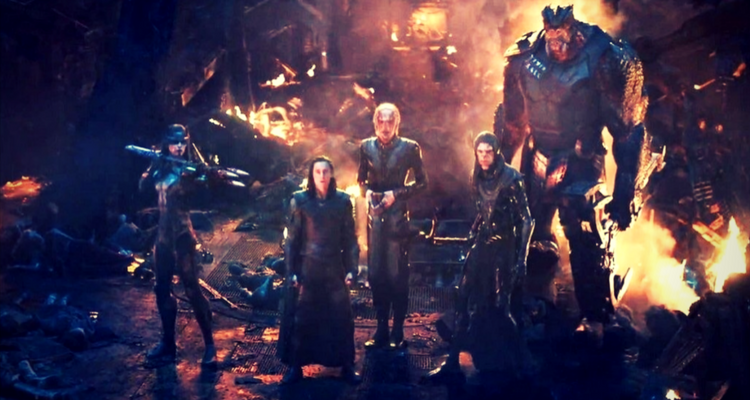 The scene flips back to the present, where the Mad Titan has Thor in a head vice, and is squeezing the heck out of him like an overripe grape. We finally get the first full shot of the Black Order: Proxima Midnight, Ebony Maw, Corvus Glaive, and Cull Obsidian, with Loki standing in their midst. Thanos takes the Tesseract and smashes it with one hand, cracking it like a walnut to retrieve the Space Stone within (connecting with that next scene where he places the stone in the gauntlet). We then get some quick cuts of Bucky loading a clip, Captain America activating his new Vibranium shield, and Black Panther materializing his helmet before attacking the Outrider army set to destroy Wakanda. A miasma shield is activated, keeping a number of the horde at bay.

Doctor Strange and Star-Lord are in action in this next scene, with Quill bouncing off some of the magical circles Strange summons out of thin air. He’s dodging some purple lasers and shooting a few of his own. We don’t see who he is fighting. Interestingly, it appears Doctor Strange is tapping into the Dark Dimension as reality appears to be bending before him. It’s also possible this could be something to do with the planet or even Thanos using the Reality Stone.

We get another shot of Scarlet Witch looking distressed (I see a theme going on with her during this whole thing). Then we get a shot of Doctor Strange being pierced by ethereal needles, and Ebony Maw looking on and sadistically trying to hush him. Back on the Wakandan battlefield, with the miasma shield activated and the Avengers with the Wakandan army holding off the Outriders who broke through (or left off from trying to penetrate it) with Falcon flying overhead shooting down a few of them. Then a group of Outriders tear apart the Hulkbuster armor like a pack of wild hyenas. 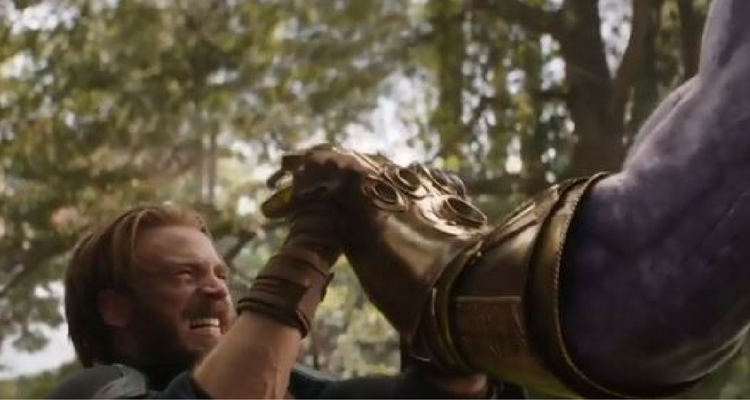 The narration of Thanos continues, “I hope they remember you.” A downtrodden Tony Stark looks down, with his armor in tatters and face covered in the dust of battle. He looks up finally with determined resolution and anger we haven’t seen since Captain America: Civil War. On the alien planet, Thanos jumps up and attacks the camera. It looks like Thanos might kill Iron Man. Although this might just be very tricky video cutting. Then we get another scene cut with it (seemingly in Wakanda) of the Mad Titan almost landing a blow on Steve Rogers. It takes all of Cap’s strength just to hold back the Infinity Gauntlet powered Thanos. What’s really interesting here is that Thanos still only has two Infinity Stones.

This reminds the audience that a death of a hero awaits. Kevin Feige told us to “Be careful what you wish for.”

A funny scene happens right after the title, where Peter Parker introduces himself to Doctor Strange. As a running gag on Strange’s name from his first movie, Peter thinks Strange is a code name and re-introduces himself as Spider-Man. Spider-Man then does some acrobatic web-slinging through a pile of exploding alien aircraft.