Marvel Comics promised readers Jane Foster or the new Thor would die in Thor #705 and they followed through on that promise.

In Thor #705 by Jason Aaron, Russell Dauterman, and Matthew Wilson, Jane Foster sacrifices herself to save the people of Asgard and defeat the Mangog, who will stop it nothing to destroy the Asgardian gods. However, her defeat of the Mangog also sacrifices one of the greatest weapons of the Marvel Universe.

Jane Foster captures the Mangog in the chains “forged by the dwarves of Nidavellir to bind the monster Fenris until the day of Ragnarok.” But it’s not just enough to capture Mangog in the chains. Asgardia is flying into the sun and it’s quite possible the explosion could break apart the chains and once again free the Mangog. In order to prevent that from happening, Jane Foster attaches Mjolnir, which is keeping her alive, to the chains holding Mangog. She then sends Mjolnir and the Mangog flying into the sun. 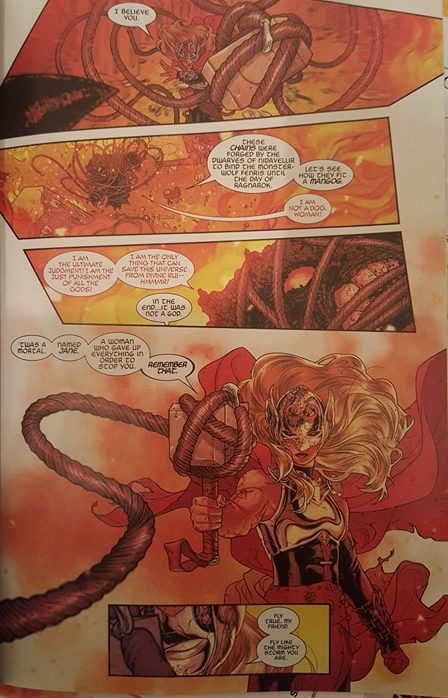 As she sends Mangog flying, Odinson screams, “What…did you just do? You threw it…into the sun…you…You Killed Mjolnir!!! You Just…You just killed you..” 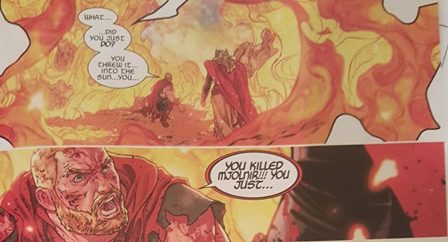 With Mjolnir no longer in her possession, Jane Foster loses the powers of Thor and returns to her human form that is being ravaged by cancer. And it appears she will die in the explosion as Asgardia begins to collide with the sun. However, that would not be the case as Odinson saves her and brings her cancer ravaged body to the moon of Asgardia. 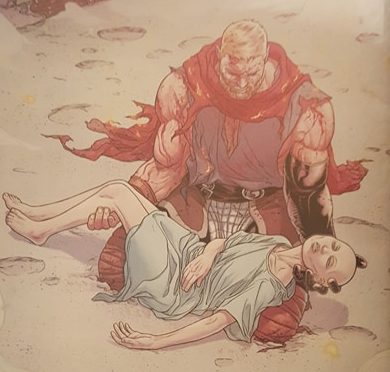 While Jane Foster is dead, I wouldn’t be surprised if she returns sooner rather than later. Do  you think this was a fitting end for Jane Foster? Are you happy Jane Foster and Female Thor has died?