The start of something good…

Well, it looks like the cast and crew of the new Men in Black reboot is shaping up nicely. When most people weren’t looking, the project managed to land F. Gary Gray as director as well as the screenwriters behind Iron Man. That’s some serious talent to replace the likes of Barry Sonnenfeld.

A while back, Chris Hemsworth was named as the star of the upcoming film. Now, The Hollywood Reporter has announced his co-star will be none other than badass mega-babe Tessa Thompson!

That’s right, Men in Black will be a Thor: Ragnarok reunion!

Hemsworth and Thompson had wonderful chemistry in the most recent Thor film. But that’s not the least bit surprising. Thompson can also been seen currently in the incredible film Annihilation as well as in the upcoming film, Creed 2. She’s a wonderful addition to any film, let alone an exciting project like Men in Black.

Thanks to the infamous “Sony Leaks” that were such a massive fiasco, the plans for this film are reportedly being kept “under a New York City ventilation tower.” Apparently, good ventilation makes something harder to acquire.

Tessa Thompson is the perfect addition to what looks like a perfect team. F. Gary Gray is versed in everything from comedy to action, which is exactly what this franchise demands. He’s the man responsible for Friday, The Italian Job, Straight Outta Compton, and The Fate of The Furious. Gray and Iron Man screenwriters Matt Holloway and Art Marcum are the perfect choices for the jobs. This is a movie with justifiably-high expectations. Hopefully, this is enough talent to ensure the film succeeds. They don’t exactly have the best track record with franchise-reboots other than last Summer’s Spider-Man: Homecoming.

At any rate, this is exactly what I looked like when I heard the news: 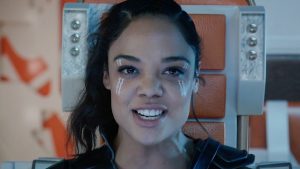 Check out Tessa’s interview at Comic-Con 2017, courtesy of IGN:

Hopefully, Tessa Thompson and company can make a film that lives up to the hype.