James Wan’s Aquaman will be hitting theaters in December. It’s not the first time Jason Momoa will play the character on the big screen, but it might as well be. Expectations are high, despite the damage done by last year’s Justice League. Hopefully, the film will represent a brand new stage in the DC Extended Universe. Regardless, Aquaman is one of the most famous heroes DC has. He isn’t the oldest water-related superhero out there, but he is by far the most popular.

Namor’s got nothing on Arthur.

For a few years, Aquaman was the laughing stock of the DC Universe, famous for “talking to fish” and nothing more. So he was sidelined. But writer Peter David helped redefine the character for a new age. Justice League: The Animated Series portrayed a relatively close depiction of David’s version of the character, who was frequently missing something particularly useful…

While that might not happen to Jason Momoa’s version of the character, they do look alike. The change in attire and addition of an awesome beard helped Arthur gain a lot of fans. Though it was just a face-lift, it helped to solidify Arthur’s place among the most powerful beings on Prime Earth. Because, frankly, he is.

The King of Atlantis is capable of great feats and displays of power. Some surprising and some not. But he has a long history that deserves to be explored on the big screen. Arthur Curry has had many, many adventures that even the most diehard DC fans are unaware of. So to get better acquainted with the character before the upcoming film, here are 5 surprising facts about Aquaman! 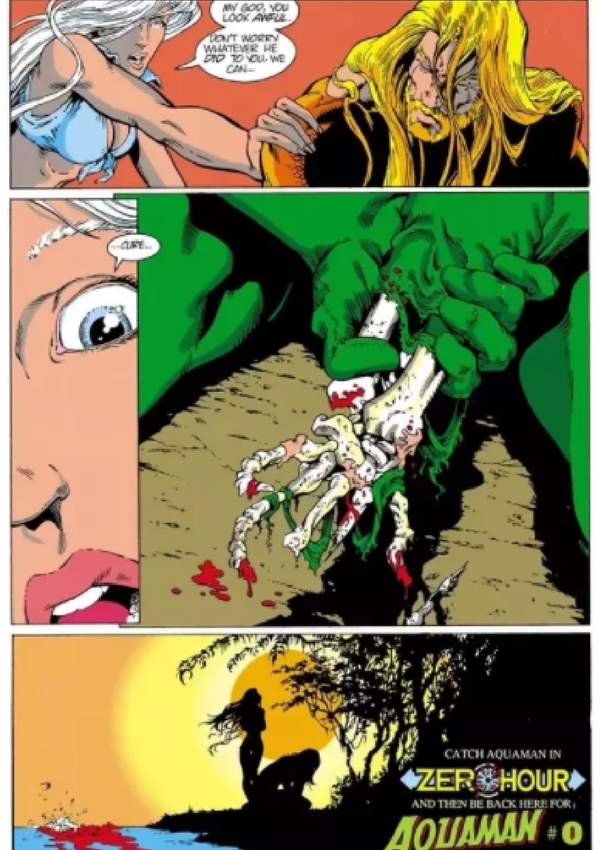 In 1994, Peter David had an idea. In the series Sword of Atlantis, a powerful magician is able to take away Arthur’s telepathy over oceanic life. After that, he puts Arthur’s hand into a piranha-filled pool of water. Without the ability to tell them to stop, the piranhas quickly devour the King of Atlantis’ hand. It’s a sad moment, but heroes losing their hands isn’t exactly a new thing. But having them replaced with awesome hook-knives is a new thing! It was a great idea, which is why they brought the same interpretation to the Justice League: Animated Series. Then writer Geoff Johns had Black Manta hack off his hand during his New 52 run on the character. Having a hero feel actual loss is a way to raise the stakes.

Hopefully, he won’t have to face such pain in his first starring role. Having two hands is always more handy than one. 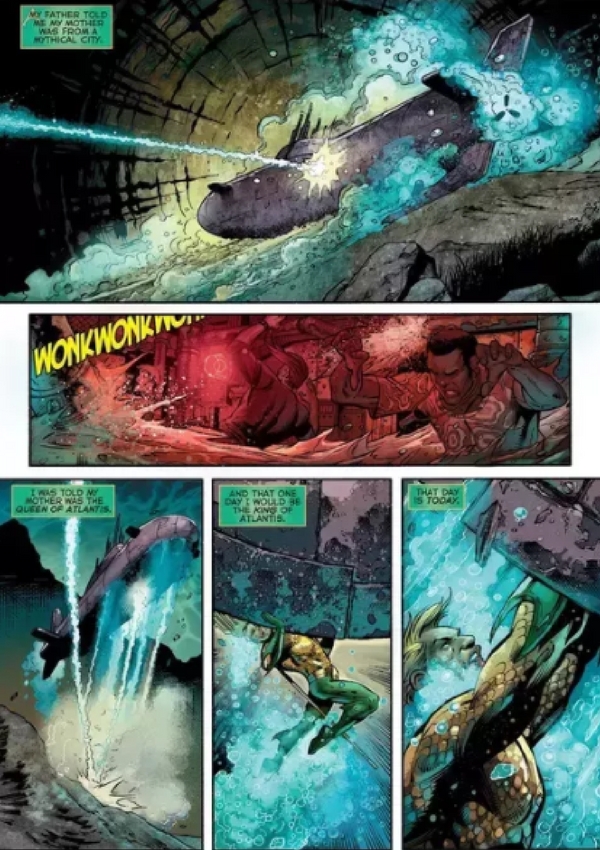 Aquaman lifts a Nuclear Submarine in The New 52 – DC Comics

Atlanteans lead quite a different life under the sea. Due to the enormous pressure of living underwater, they possess great strength. But Arthur grew up on land… That should make him weaker, right? Not the case. In fact, Arthur Curry is one of the most powerful beings on Planet Earth. Even Superman has a tough time controlling Aquaman.

That power is demonstrated above when Arthur lifts a 48,000 ton nuclear submarine from the bottom of the ocean. In the same run on the character, Arthur’s body easily deflects bullets as well, showing how dense and powerful he actually is. Let’s not forget Aquaman was one of the few beings able to withstand blows from Superman in the Justice League film. Without having to make any jokes about “bleeding.” Momoa’s character might not be as powerful as his comic-counterpart, but chances are he can lift a ton or two.

3. His Telepathy extends to beings that evolved from the ocean… including humans and Kryptonians

Aquaman’s most defining superpower is his ability to talk to fish. But that’s not really what he does. He has a mental power of command, or telepathy, over aquatic life. But it’s more than that. While it is on the more ridiculous side of powers, Aquaman’s telepathy can apparently affect any being that has evolved from oceanic life, even Superman. It was more of an excuse to give Aquaman an edge over Superman at the time, but it kind of makes sense.

While Aquaman isn’t able to “control” humans or others, he is able to direct them. To send a signal to do something. It makes sense that the more complex the mind, the less susceptible they are to his control. But James Wan and the Aquaman screenwriters have probably cooked up a few interesting ways for Arthur to use this particular power. 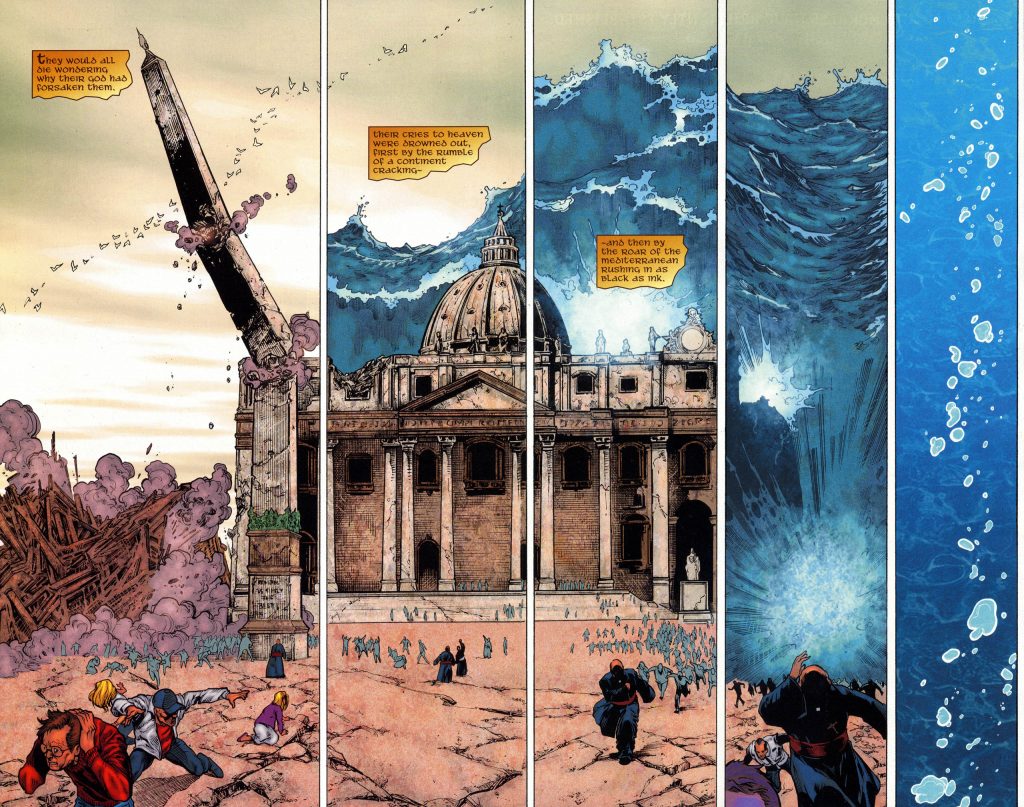 You read that correctly. Aquaman is one of the most destructive forces in the known world, because he harnesses the power of the ocean. Like our very own bodies, Earth is comprised mostly of water. Most of its surface is covered in water. That makes Arthur’s Kingdom rather large; his power almost limitless. In Flashpoint Aquaman was a villain. The story was a reinvention and lead-in to a renaissance of the comic world so it made sense that a few heroes and villains would switch sides in this “alternate” universe. Since Aquaman is one of the central villains of that story he delivered one of the most brutal blows ever in the history of comics.

As seen in the panel above, he literally sank Western Europe, killing around 60 million people. Other than planet-destroying cosmic villains, no other DC character has ever annihilated so many people. A testament to how important it is that Aquaman is on our side.

5. On Earth C-Minus, Aquaman is a duck on the superhero team “Captain Carrot and the Amazing Zoo Crew”

The 80’s were a fun time for comics. It was the dawning of the age of Cartoons. Comics of all-ages were getting printed with some cool quirks. One of the most famous comics was Captain Carrot and the Amazing Zoo Crew. Grant Morrison recently revived Captain Carrot for his Multiversity series, but originally the Zoo Crew was just another riff on the Justice League. Captain Carrot was the obvious metaphor for Superman, so what was the parallel for Aquaman? Why that was none other than Aquaduck! Together the animals formed their own version of the Justice League, but it wasn’t known as the Zoo Crew. No, like most other comics of the Bronze age these writers loved their puns. So the name for the animal team was none other than “Just’a Lotta Animals”.

While DC Comics is probably not going to dig up Aquaduck anytime soon, he’s a humorous and colorful part of Aquaman’s history. A rich and storied past that helps to define one of the most famous comic book characters ever created.

Hopefully, director James Wan and Jason Momoa will be able to channel some of Aquaman’s unique history for their upcoming film. Aquaman hits theaters around the world on December 21st.