“Who the hell is Tom Strong?”

The Terrifics #2 picks up right where the first issue left off. This merry band of misfits is lost adrift a cosmic-adventure not entirely of their making. Mr. Terrific, Metamorpho, Plastic Man and Phantom Girl are proving themselves to be quite the team. While the story is still moving much too-quickly, writer Jeff Lemire has plenty to entertain every comic reader. Even if the splendor of Ivan Reis’ art weren’t on every page, the overall story and tone is perfectly captured. The comedy is aces; the action is captivating. Even if the mission isn’t clear the adventure is more than worth the price of admission.

Ivan Reis is joined by Jose Luis on pencils, Vicente Cifuentes and Jordi Tarragona on inks. With Marcelo Maiolo providing the colors. Not exactly a small team. But any reader will see why. The glorious art is by far the highlight of the issue. The framing is perfect. Every panel is effective and utilized perfectly. There isn’t any wasted space. That’s the kind of efficiency that comes in an Ivan Reis comic, even if it takes a village to help put it together. 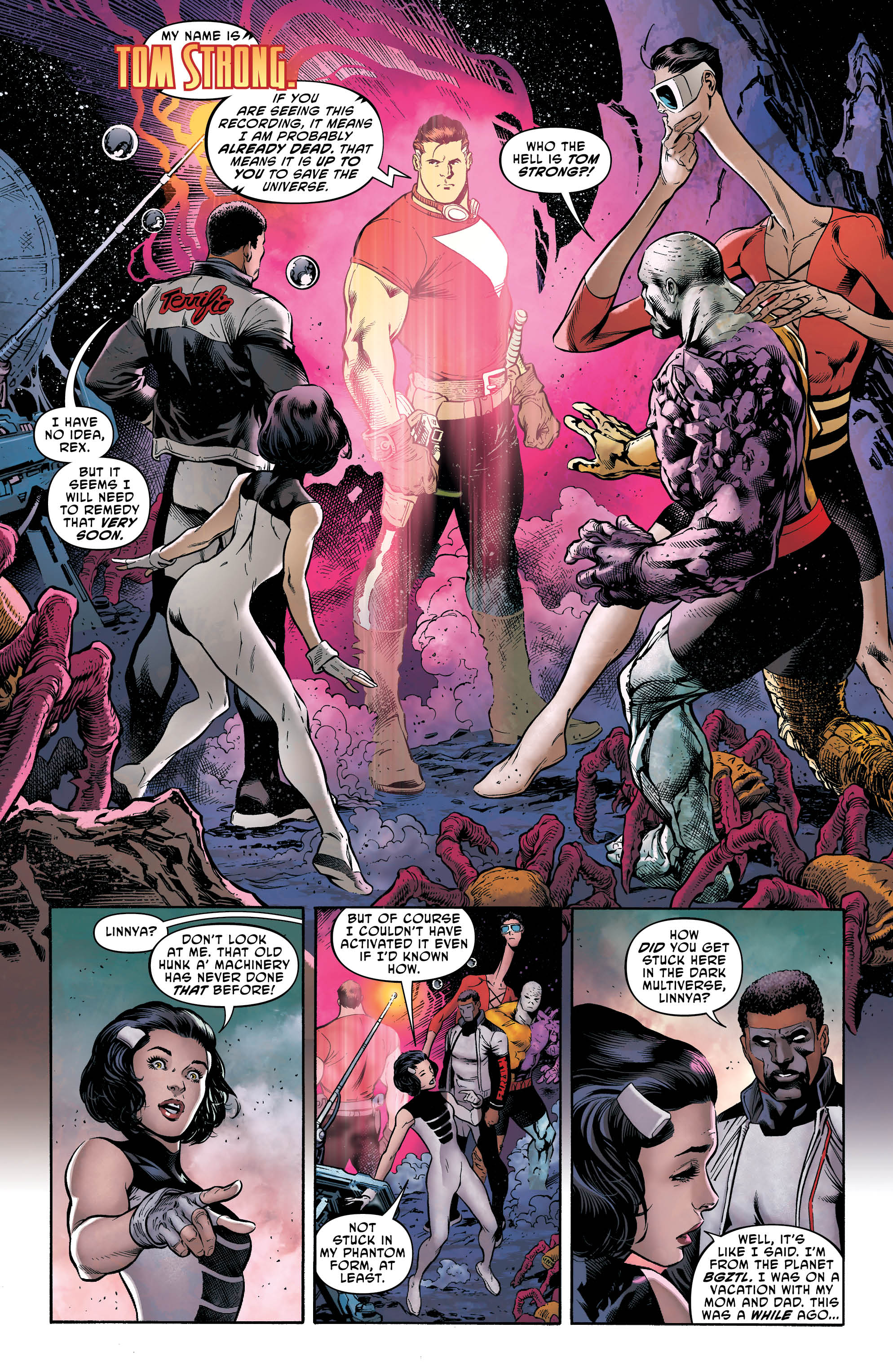 The Terrifics are turning into quite a team. Witty banter requires good chemistry, you know. So it’s a continued surprise that Jeff Lemire pulls off such a fun and entertaining story. Unfortunately, fans will learn as much about Tom Strong as they did last issue. But as long as every issue remains a page-turner, readers will keep coming back.

“…it was my pod that ended up being sucked into the rift as their ship pulled free.”

One might wonder just where Jeff Lemire got this weird group of characters. Did he think this group together or did DC task him with such a book? Either option is a testament to the writer’s creativity. No one in the history of DC Comics would have ever put this set of heroes together; it’s possible that no one else at DC Comics could have made it work. The chemistry and banter is just as good as any superhero team-up.

Plastic Man and Metamorpho already deserve to star in a 1980’s sitcom together.

But just when Lemire gets the reader to sit and enjoy an exchange between comrades, a massive explosion or piece of of the cosmos launches itself into the story. It makes for a fast-paced story, but it’s moving almost too quickly. The story has yet to explain just why this group of people has been thrown together, and the answer can’t just be “for fun.” Mr. Terrific even points this out near the end of the comic. A piece of metacommentary from Lemire, himself. But pointing it out doesn’t do any good. Yes, a comic should have enough questions to warrant buying the next issue. 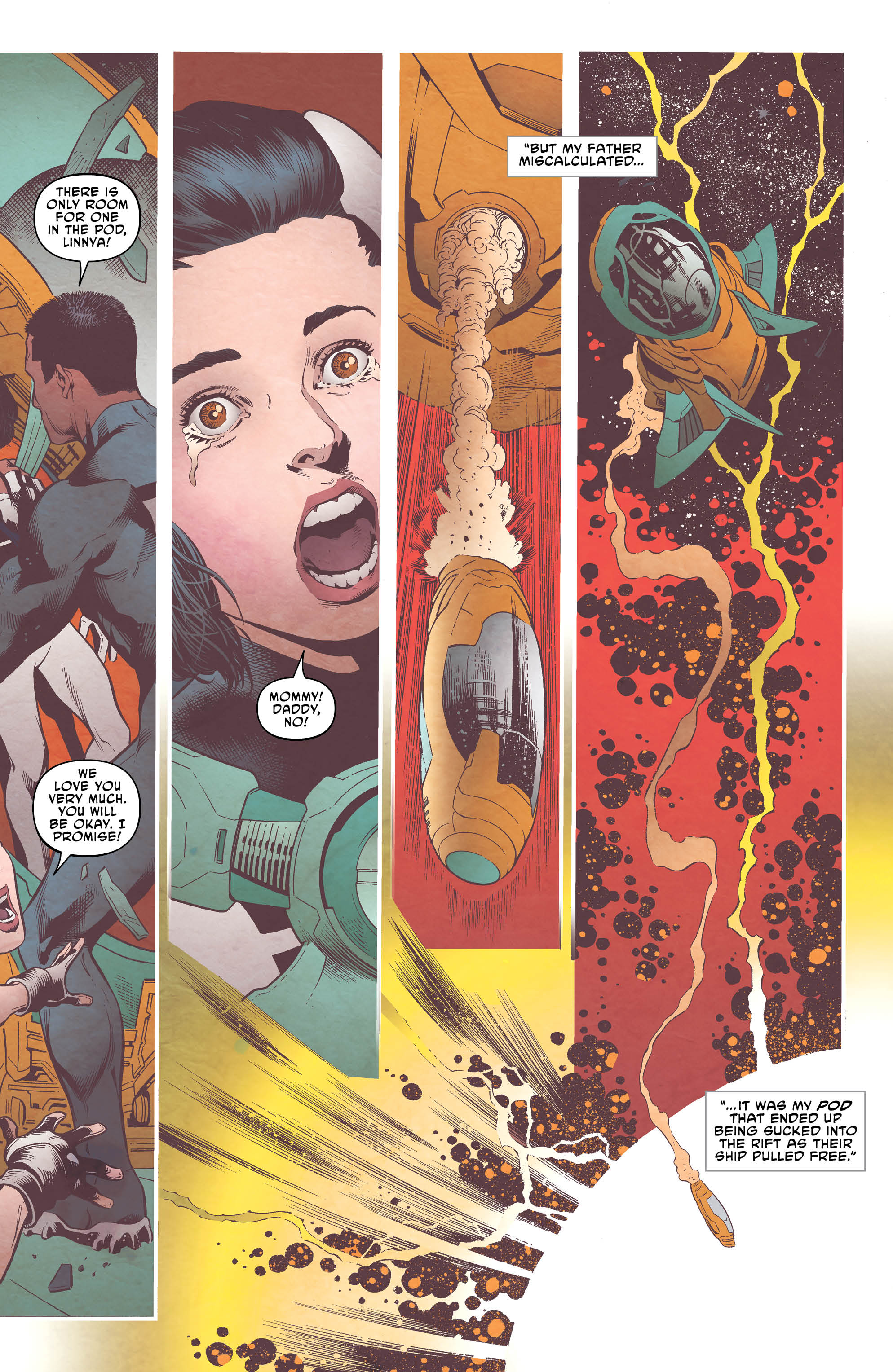 But every issue needs to actually have some answers, not just ask the same questions again. And that’s the problem.

The question of “Who is Tom Strong?” still looms after The Terrifics #2. While it’s an exciting read it’s time to move the story forward.

Ivan Reis is one of the flagship artists at DC. Like Jim Lee, his style is so clean and crisp that he’s perfectly capable of capturing any scene. Reis is able to put any kind of character in any kind of situation. That may sound simple at first, but when you realize just what four heroes Jeff Lemire has jumping across the cosmos it becomes even more daunting. Plastic Man is already a very complex figure to draw. Reis doesn’t just draw him well, he makes his entire frame part of the comedy of the comic. His entire figure serving as a bookend to both the story and the panels.

The epic backdrops are nothing short of amazing. A massive figure looms in these pages, serving as a surprise awakening for our heroes. It’s a beautiful scene. One that puts our heroes in great peril. But it’s just about the most beautiful peril ever drawn. Explosions and anatomy seem to be Ivan Reis’ specialty. It doesn’t hurt that the team seem to have quite a few explosions surrounding their work. It”s obvious that Jeff Lemire knows just what to write to keep readers, and Reis, excited for the next page. 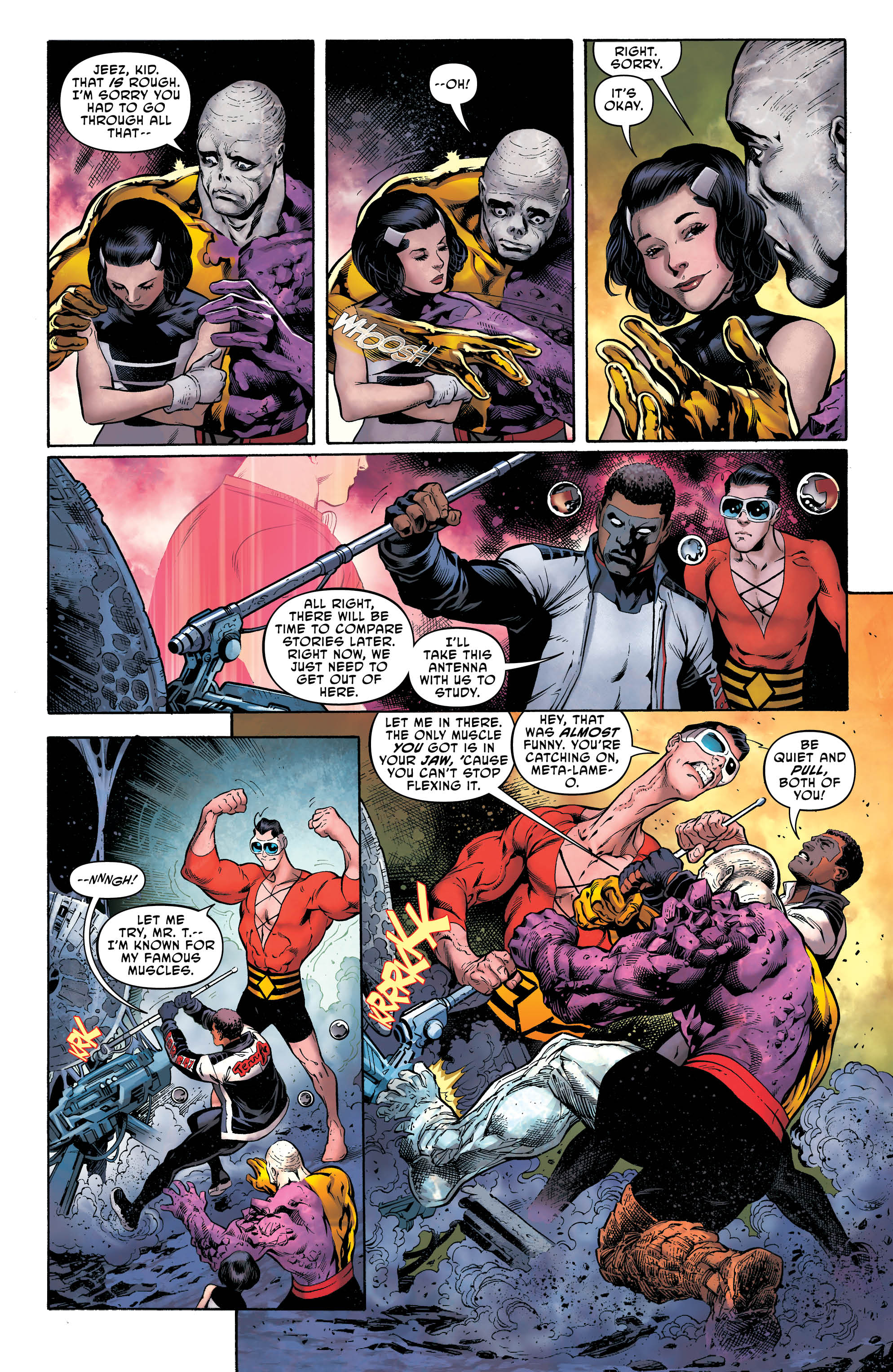 Fun and excitement. Jeff Lemire and Ivan Reis deliver that and more in the pages of The Terrifics #2. Mr. Terrific and his weird troupe are still traveling the cosmos on an unknown adventure. It’s still a mystery to them; it’s still a mystery to us. The only thing that develops is the chemistry between the group. Unfortunately, writer Jeff Lemire has made The Terrifics #2 and the debut issue great at asking questions of the reader, but not delivering answers. The beautiful holographic image of an unknown adventure haunted the last page of the first issue, just like he haunts the first page of this issue.

Unfortunately, the image of Tom Strong remains just as mysterious. But this group of Terrifics are having the time of their lives. Just like the reader. Jeff Lemire is putting Ivan Reis to work, and it shows. The two have already created a team that manage to look as awesome as they sound. Their mission isn’t clear yet, but that doesn’t make it any less fun.

Mr. Terrific isn’t always the most likable hero. He thinks he’s smarter than everyone else, and he’s probably right. But throw a couple of dopes and a weird girl at him, and he’s suddenly a more intriguing character. The meaning of The Terrifics #2 and the previous issue still a mystery. But Ivan Reis and Jeff Lemire’s promise of adventure is more than worth price of the next issue.