John Boyega took to the Main Stage at Awesome Con on March 31st where he discussed quite a bit from Attack the Block to a potential role in the Marvel Cinematic Universe. He also talked about his latest Pacific Rim Uprising movie and of course he talked about Star Wars.

John Boyega admitted he had not actually seen the script for Episode IX yet, but told the enthusiastic crowd he believes Episode IX will be “all out war in the final chapter.” He proceeded to tell audience members he would Tweet out, “Guys I’ve read it,” when he does read the script. 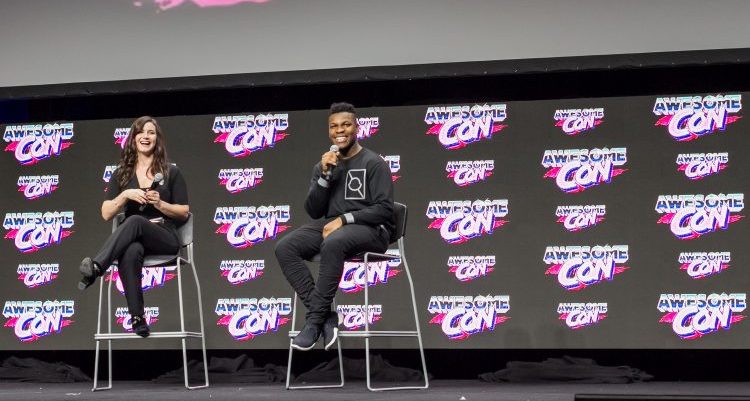 To get prepared for the all out war, Boyega  had some ideas to properly equip Finn. He joked that “Finn needs a jetpack and two blasters, one in each hand. Maybe Boba Fett can pass down his gear.”

Boyega did confirm that Rey and Finn will get back together in Episode IX. Other than that he mainly speculated and told the audience what he hopes to see happen in Episode IX. One of the big hopes is for Finn to meet Lando Calrissian. Lando has kind of become the Hawkeye for the new Star Wars trilogy. Lucasfilm and Disney have brought back all the other core Original Trilogy actors except for Billy Dee Williams. Granted Williams has given voice to Lando in Star Wars Rebels.

Another fan asked him if he could play any other Star Wars character who he would play. His answer was quite decisive when he said he would play bounty hunter Bossk.

Boyega was also asked about if he would return to Star Wars in a similar way that Mark Hamill, Carrie Fisher, and Harrison Ford returned for the ongoing sequel trilogy. “Yes, absolutely. I’d love to see where the story would go. When I’m 35, God gives me the days, I’ll come back.”