Marvel Comics seems to have a problem with Captain America. Just last year, they launched an entire event called Secret Empire which saw Captain America become a member of Hydra, the equivalent of a Nazi.

Now, in what appears to be a one-shot comic titled Avengers: Shards of Infinity #1 written by Ralph Macchio with art by Andrea Di Vito, Captain America has turned into a gun control advocate.

The comic starts off as normal superhero fare. There is an evil organization planning to dominate the human populace. This new organization called L.U.N.A.R., which stands for Life Under Natural Authoritarian Rule, plans to use stolen vibranium from Wakanda and combine it with a cosmic cube fragment to virtually disarm all of humanity. Of course they plan to do this from a base on the moon.

To no one’s surprise the Avengers foil their plan. Captain America, Black Widow, Black Panther, and Falcon assemble to defeat L.U.N.A.R. and their leader Irma Krakov. They use a number of weapons to do so. Captain America uses his shield, Falcon uses his wings, Black Panther uses vibranium knuckles, and Black Widow uses a number of her darts. But more importantly they use their bodies as weapons as they use their fists, knees, legs, and even their fingers as weapons. 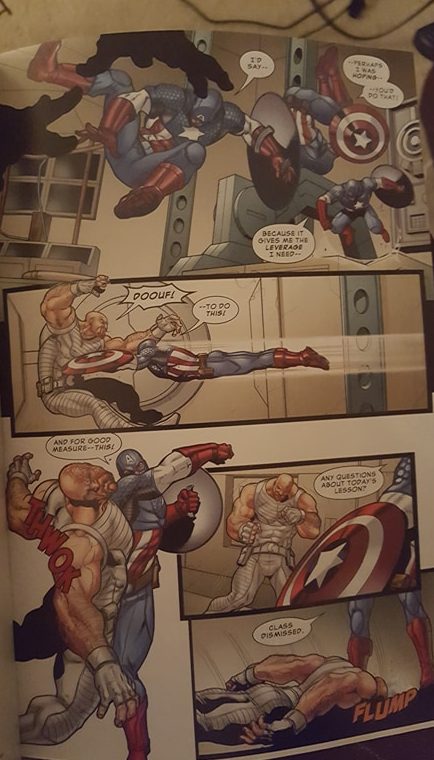 He tells the Avengers team, “I was just musing, Natasha…Perhaps under other circumstances, wouldn’t it be cause for rejoicing if all the world’s weaponry were destroyed?”

Falcon chimes in, “Excuse me for sayin’, but isn’t that a touch naive coming from the living legend of World War II?” Black Widow responds, “I agree.” Captain America doubles down, “No one knows the horrors of global conflict better than I do. And no one wants an end to war more than a man whose very purpose in life is to fight. It reminds of what John Lennon said- – Imagining a world where all people could live together in peace.” He continues, “That is truly a worthy dream to strive for, Avengers. And I’m a dreamer too.” 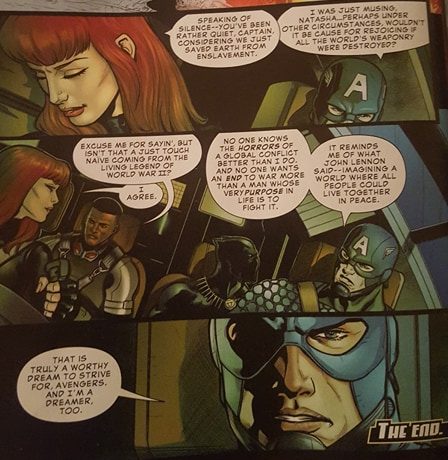 As Falcon and Black Widow point out, it’s a little rich for Captain America to call for gun control when he literally used weapons to defeat one of the greatest evils in the history of mankind. In fact, he just used weapons to defeat another organization from attempting to control humanity. I mean this entire story was based on stopping an organization who wanted to disarm humanity in order to control them. It doesn’t make any sense that Captain America would then turn around and be like, “You know these people were right. We should disarm all of humanity.” It’s just absolutely absurd and nonsensical.

Captain America is a living weapon. He’s an enhanced super soldier. He’s basically saying he wants to destroy himself. Not to mention the lives of his fellow Avengers, who also use their physical bodies as weapons.

Now, that’s not to say peace isn’t a goal worth striving towards – it is. However, Captain America would not advocate total disarmament in order to achieve it because his own life experience shows that you have to be prepared to face evil and stand up to it. What better way to stand up to it than to be armed?

But let’s try and take this logic and apply it to where Marvel makes the big bucks in the Marvel Cinematic Universe. Can you even imagine the laugh Thanos would let out if he heard Captain America say something so stupid in Avengers: Infinity War. One of the biggest lines from the trailer is Black Panther telling his soldiers to arm Captain America! “Get this man a shield.” Captain America calling for gun control is just patently out of character.

Editor Mark Basso should have easily caught this and corrected it. Captain America should not be advocating for gun control ever.