“Aren’t you supposed to be out getting a job?”

Things are hard for Joe Chamberlain. York Hills has suffered a lot in the last few years. The coal left; then the people left. Joe is a 20-something just trying to help his sister Annie get to nursing school. A little hard to do when you don’t have a job, money, or means to get either of those things. That’s where the story for The Curse of Brimstone #1 begins. Writer Justin Jordan and artist Philip Tan team to bring to life a fiery new tale in a small, small town. It’s not an unfamiliar story, but with good reason.

“Deals with the devil” never go right. There’s always something written in the fine print of the metaphorical contract, that the signer doesn’t know about. A small detail that makes the deal a little less worthwhile. Jordan never lets the reader think this deal will be good for Joe. There’s no promise of greatness; no light at the end of the tunnel. York Hills, Joe, and his family are at a difficult crossroads. By giving a bleak introduction to York Hills and Joe, Jordan has set up an awesome story that puts a unique spin on an old story.

Philip Tan has one of the most unique brushes in the business. He and colorist Rain Beredo create figures and backgrounds as intricately as any watercolor painting. The design for Brimstone himself is awesome. A fiery entity whose flames lick at his surroundings almost uncontrollably. Beautiful destruction. 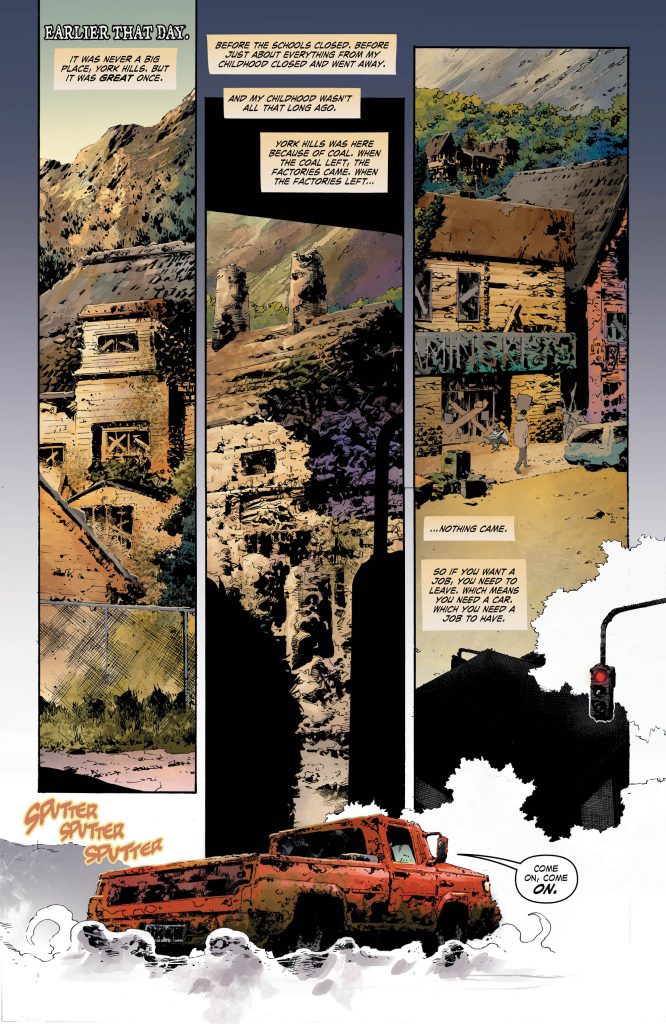 “So if you want a job, you need to leave. Which means you need a car. Which you need a job to have.”

It’s disturbing to think that places like York Hills, the settings for The Curse of Brimstone, might exist. Towns and communities completely lost just because that one company left town, or because there isn’t that kind of work around anymore. When towns rely on one thing, and that one thing disappears, what then is left? Joe Chamberlain and his family, that’s the answer. The desperate folks in the town of York Hills are characterized perfectly by writer Justin Jordan. By avoiding most cliches, he’s decided the story can’t be about this promise of salvation that leads to terror. Jordan doesn’t have time for that.

No, there’s no mistaking that the man who came to barter with Joe is evil. Some kind of opportunist demon, or the devil himself. But Jordan is smart enough to keep a few mysteries in his pocket, making the story even more intriguing. Readers will want Joe to succeed. Wanting him to have the life he longs for, and the life he wants for his sister. Making him an already endearing character with a wild side. Certainly “wild” considering how many times he’s been arrested, another detail that makes the character more authentic.

Hopefully, Joe can make this “curse” into something of a blessing. But until then, it’s going to be an exciting and interesting path of destruction. 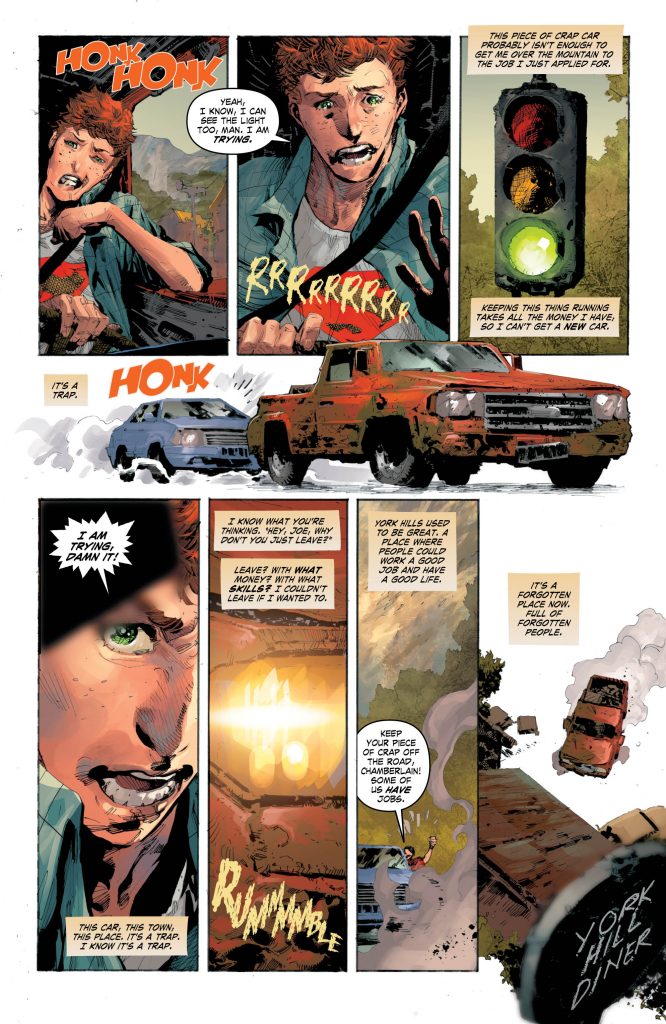 “If people could just see this place, it could be different.”

Philip Tan’s art is unmistakably his. His lines aren’t always defined; neither are the panels. But that’s part of the beauty. A dream-like quality that can leave any of his comics feeling like an old fairy tale or some distant memory. In The Curse of Brimstone #1, the entire comic feels as though you’re peeking into a cauldron of fire filled with a story. Every page is lined with beautiful colorfs that seems to spill into the world outside, a testament to the talents of colorist Rain Beredo.

The town of York Hills looks as drab and awful as it needs to be, but that’s not a bad thing. Chances are it’s going to go through a bit of a rebirth, thanks to the many flames that emanate from Joe Chamberlain’s new curse. Brimstone isn’t a new character to the DC Universe, he was actually created in 1986. But thanks to an incredible new design by Tan, the character looks brand new. The dark, black lines across Brimstone’s flame-laden face is an undeniably beautiful image. Though some of the characters can be difficult to discern sometimes, due to Tan’s wispy style, it’s more beneficial than not. 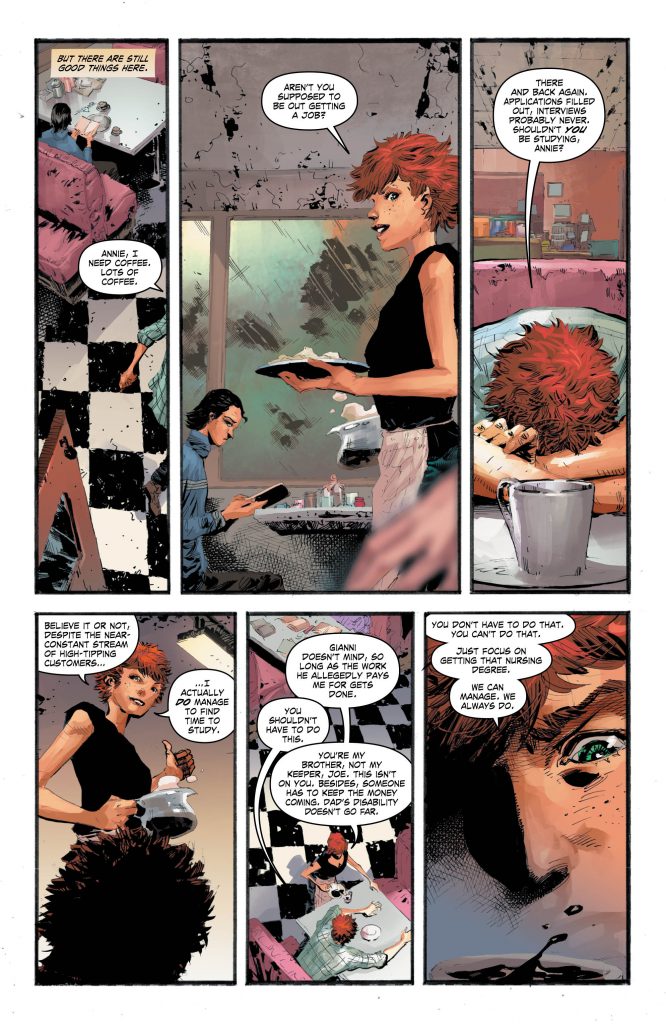 The Curse of Brimstone #1 is a simple beginning to a not-so-simple story. The town of York Hills, and its inhabitants, are in trouble. In need of a shake-up. That comes to town in the form of a lone car, and a lone “salesman.” A man who offers Joe Chamberlain the ability to turn his town around. Sounds like… a pretty terrible idea. Because that’s how these usually pan out. But writer Justin Jordan avoids the normal cliches by simply moving past them. Making the story sure from the very first page that Joe would take that offer.

It’s an old premise, but one that becomes particularly intriguing thanks to this creative team. Justin Jordan writes a great script that’s illustrated wonderfully by artist Philip Tan. His art is some of the most recognizable in the business. It might make some characters difficult to distinguish, but it excels in every other way.

The key ingredient to the story of Brimstone is fire. It’s horrible and somehow captivating. It’s beautifully drawn by the hands of Philip Tan, and it could be beautiful for the town of York Hills when used by the story’s main character Joe Chamberlain. Time will tell if his new powers will be either a curse or a blessing to the town of York Hills, but thanks to Justin Jordan and Philip Tan it will be a pleasure to read.