A recently released comic book satirizing the United States’ current political atmosphere as well as the famous Japanese manga, My Hero Academia, has come under attack. The comic, My Hero Magademia, portrays President Donald Trump as the hero Wall-Might as he fights against the Swamp with his allies Maiku-Kun and Flotus. It’s a fun, entertaining, and action-packed comic created by  writer Mark Pellegrini and artist Timothy Lim.

The comic book hit shelves on March 28, and already has come under attack. A number of people wanted the book shut down with a copyright claim while others called to burn it.

Is there any way we can flag this as copyright infringement https://t.co/i1Imut5Unq

I’m suicidal someone get horikoshi on the phone

All Might would never stand for this. I hope @horikoshiko sues the pants of you. これは災厄です。

Yea I hate to agree but if we go after derivative works we would ultimately hurt people who sell art in artist allies and stuff like that. I mean this comic to totally garbage and this person clearly doesn’t understand the source material and I wish it burn it a fire.

This something villains do pic.twitter.com/nJQPt5e4Kg

DO IT, BURN IT

Somebody please burn this and leave no evidence

id rather kill myself

Can’t wait to see your ass get sued pic.twitter.com/GlPOH3xrg1

Cut this shit out, you clueless turbosperg

Needless to say the comments are pretty nasty. What’s actually really interesting about a number of them is they complain and even threaten legal action because one of their favorite animes is being parodied. Some of them even want to burn it. This is very different from what we’ve seen in mainstream Marvel Comics where they’ve actually radically changed a number of their characters instead of creating their own. What My Hero Magademia does is actually create new characters that are inspired by My Hero Academia.

It also proves that you can create new characters and be successful as the book has sold out and is expected to go into a second printing.

Due to the backlash, My Hero Magademia publisher Antarctic Press released a statement on Facebook:

We are a creators rights publisher which publishes books which we find entertaining… Anything expressed by our comic book creators are solely their vision of their comic book creation and do not reflect the opinions of Antarctic Press…sheesh..

A normal statement of what you would expect from a publisher. But some readers weren’t’ satisfied and continued to accuse the publisher of “providing a platform for white supremacy.” 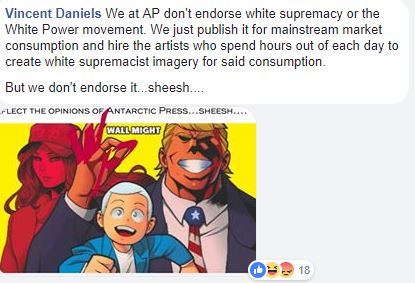 Antarctic Press stood firmly behind their creators and their position with the comic.

In a statement to PJ Media, creator Timothy Lim talked about Antarctic Press and their consistency:

“Our publisher, Antarctic Press, has made numerous books before and after the election that poke good-natured fun at Trump. Yet it is only now when they give a right-leaning creative team a fair shake at their own spoof that the rabid, SJW Left is in a tizzy about it. From their terrible lack of understanding of parody, satire, and fair use laws to their hyperbolic statements and screeching about our work, it is very telling of the double standard that these ideologues have. Unlike other properties whose characters have been altered beyond recognition by agenda-driven scribes in an official manner, ours remains solely a comedic, independent, and divorced work.”

It’s great to see at least one publishing company willing to allow a platform for creators of any political stripe to display their work. If you can make fun of the right, then why not the left? Us on the right have grown accustomed to ridicule, over the last quarter century, and personally, I don’t take offense to any of it. Because in my view, if you cannot handle satire of your own beliefs, then maybe your convictions aren’t that strong.

It has been expected that we shut up, sit down, and take any sort of mockery especially over the last twelve years. Very few entertainers any more are willing to poke fun at anything within their belief sphere, and the world is worse off.

Though South Park has had some issues over the last few seasons with their shift in anthology storytelling. They still are willing to poke fun at all sides of an issue. Something that has become less accepted over time.

So if you’re a fan of the current president, or like me, not, take a look at  My Hero Magademia. Satire doesn’t’ get enough credit, and its a great way to spend an afternoon.