“The dream always starts the same. Caden Park is running for his life.”

Sometimes, it takes a village to put a comic together. Some creative teams consist of one or two people; some, like The Immortal Men #1, have about seven. That’s a lot of talent for one book. But did this incredible team that includes Jim Lee, Ryan Benjamin, James Tynion IV, Scott Williams, Richard Friend, Jeremiah Skipper and Alex Sinclair deliver a great comic? They sure did. The Immortal Men #1 is a little rough around the edges, but it’s a fantastic thrill-ride that doesn’t let go from the very first panel.

Caden Park begins an incredible journey in The Immortal Men #1, and the reader is going to join him.

The art comes from two of the best in the business: Jim Lee and Ryan Benjamin. The transitions between the two aren’t exactly seamless, but that doesn’t matter. Both Lee and Benjamin create a fantasy dreamworld that begs to be explored. So much so, that the main character has been driven all his life by this beautiful world he has yet to explore. It’s an enticing way to sell a comic, by inviting the reader into the same world that the character is visiting for the first time. Welcoming us to a vivid new Age of Heroes. It’s not a perfect beginning, but it’s a few great steps in a wonderful direction. 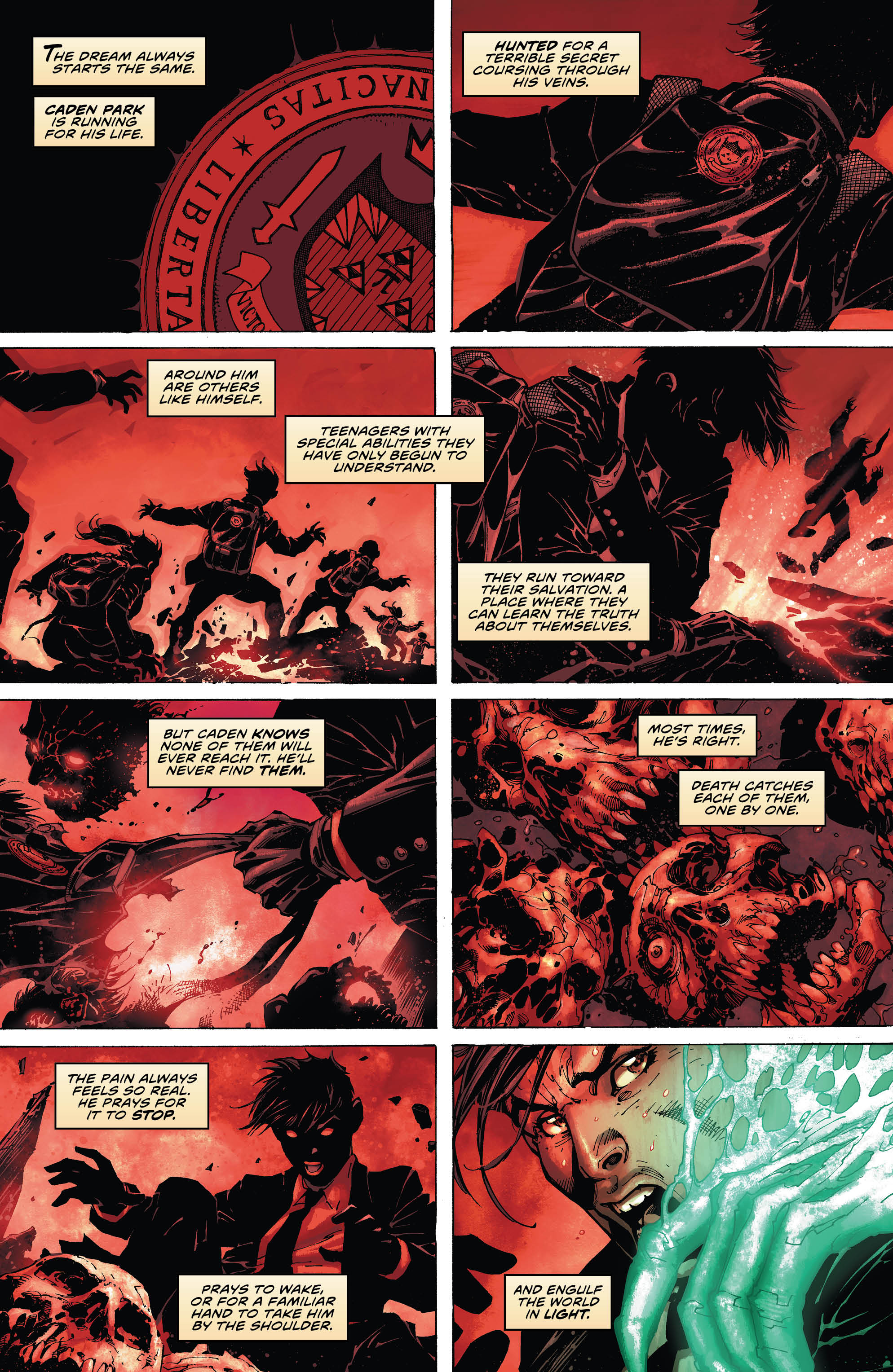 “Every time is the first time. The sight of this impossible place takes his breath away.”

A dream is all that connects Caden Park to something he knows to be important. A life or purpose that screams out to him. Writer James Tynion IV has created an inviting story for Park as well as the reader. The Immortal Men have been hunted to near-extinction. Only a small band of heroes is left to try and “save the world.” The Immortal Man and his sister The Infinite Woman are the two pinnacles of power at the center of this story.

Immortal remains a mystery, revealing himself only briefly to Caden throughout the issue. Infinite is a towering force of evil, a great villain established in the first few pages of The Immortal Men #1. A lot of comics don’t bother to announce their heroes and villains so quickly, instead leaving them as mysteries or story elements to play with. But The Immortal Men #1 isn’t interested in keeping the reader perplexed. No, this art and writing team is only interested in an exciting and fun adventure.

However, that can present a bit of a problem. Readers won’t learn why Caden Park needs to be an Immortal Men, and they won’t learn why that seems to be important. A little more backstory would help add some much-needed context to just why the world needs saving if only the Immortal Men are being hunted. Nevertheless, The Immortal Men #1 is still an entertaining read with some captivating panels. 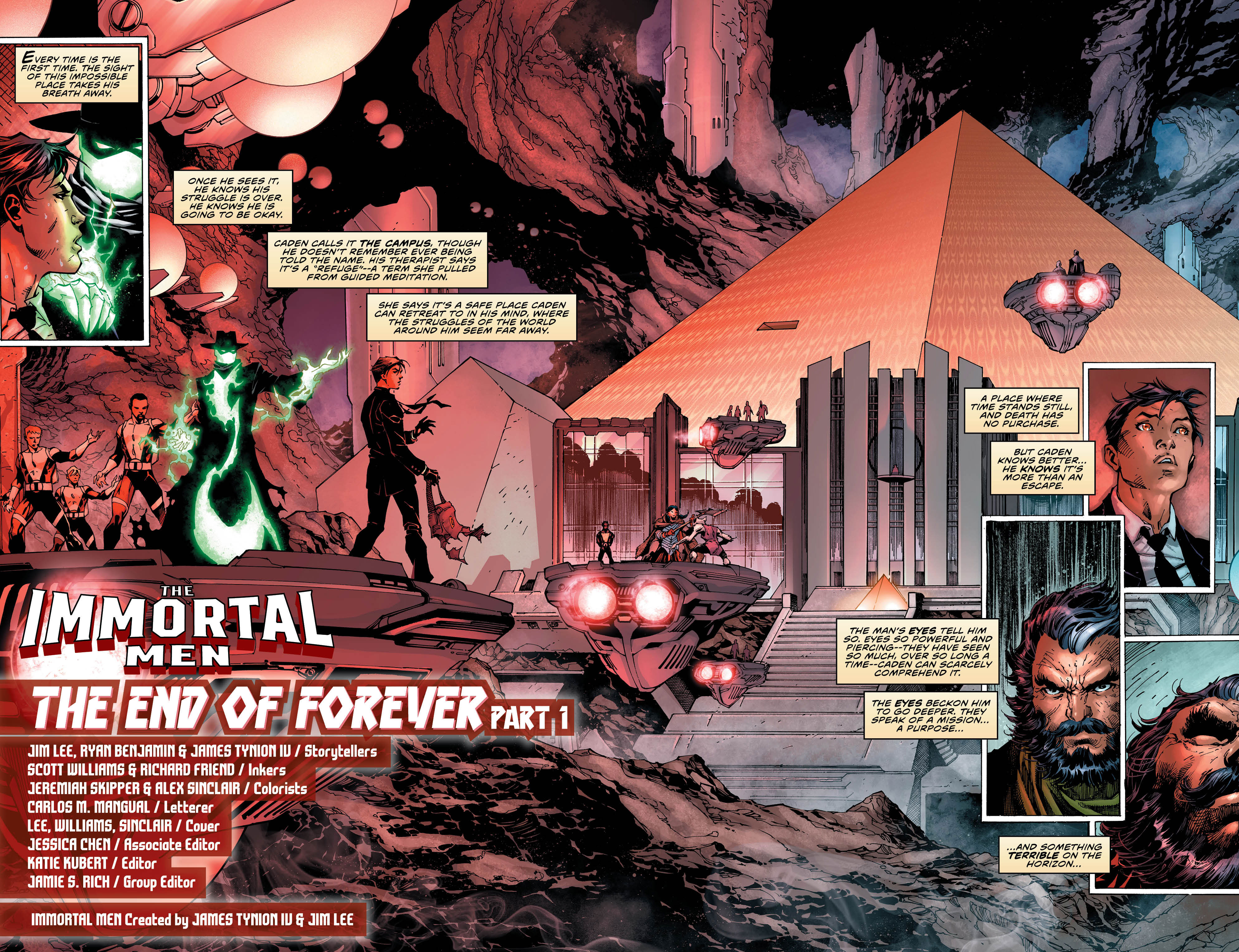 “The eyes beckon him to go deeper. They speak of a mission…a purpose…”

Jim Lee is one of the biggest names in the business. Actually, he’s one of the most famous and influential comic book artists of all time. His work epitomizes the idea of a superhero: a godlike do-gooder capable of feats of magic and wonder. It doesn’t matter if it’s Batman or Superman; it doesn’t matter if it’s Marvel or DC. He’s one of the best in the business because of fantastic lines and expression. That doesn’t change in the pages of The Immortal Men #1. Lee brings his A-game by creating one of the most vibrant worlds he’s ever explored. Ryan Benjamin was the perfect artist to help Lee with this story.

Due to the fact that he’s literally one of the top dogs at DC, Lee doesn’t get much time to draw these days. So he shares these 20 pages with another brilliant artist who manages to step up to the plate. There’s also something to be said for the colors of Jeremiah Skipper and Alex Sinclair. It’s no easy task, moving from dreamlike world to the subways of New York. Yet every artist on this team is responsible for elevating each other’s art and making The Immortal Men #1 a wonder to behold. 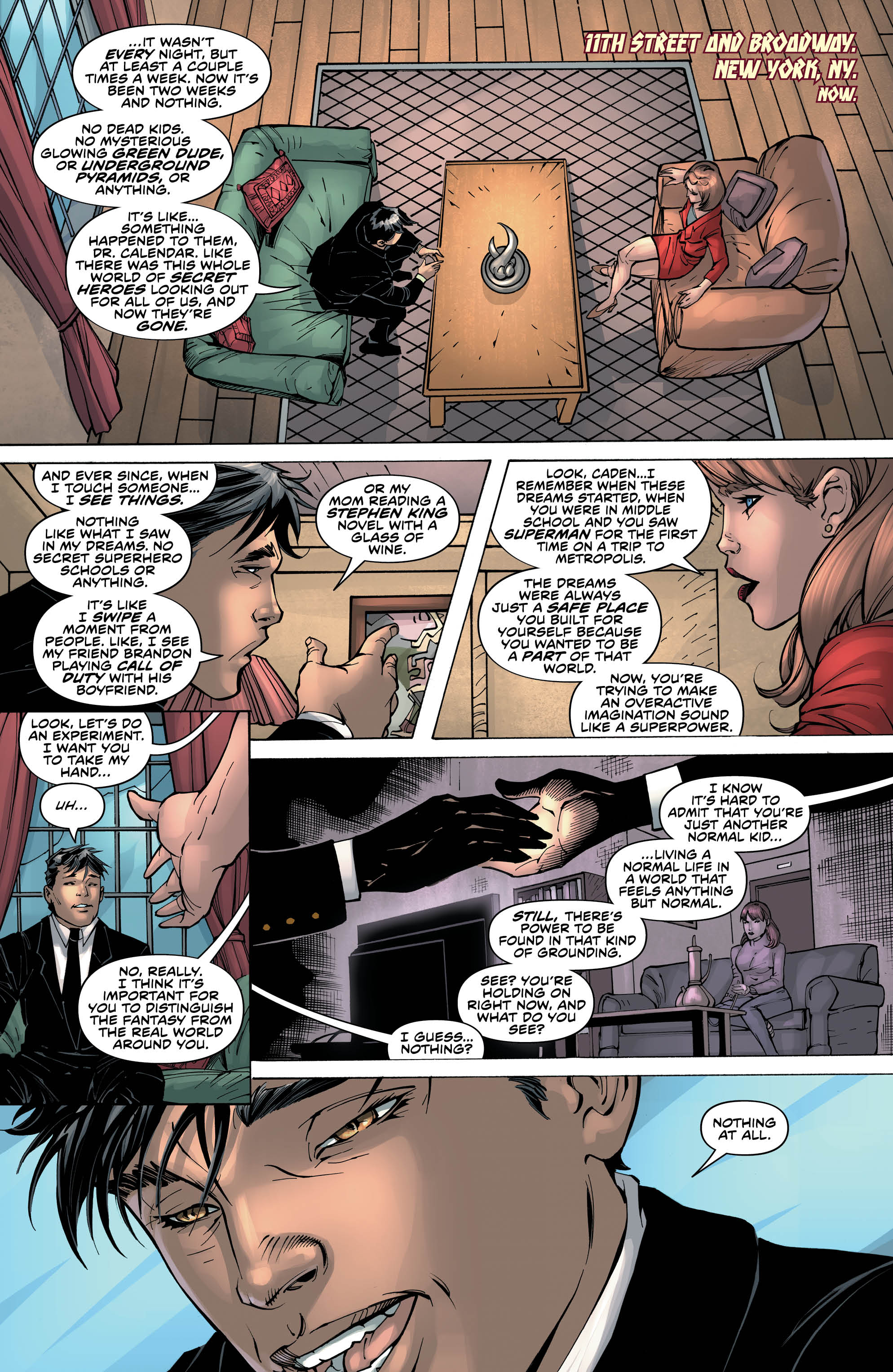 Another team book? That doesn’t exactly seem like something the comic world needs right now. Between the Justice League’s and ton of Avengers spin-offs, most readers would prefer stories centered on a single subject. Well, that’s just how The Immortal Men #1 begins. The story centers on a young man named Caden Park. While he seems to have been born with a silver-spoon in his mouth, that hasn’t stopped the nightmares. Or dreams. Seemingly prophetic visions of a place he doesn’t recognize; of people he doesn’t know.

A cause and purpose that will soon become very important. At the opposite ends of the story are two incredibly powerful figures: The Immortal Man and the Infinite Woman. A simple villain and hero set-up: one is looking to save the world while the other is looking to destroy it. Jim Lee and James Tynion IV have created a wonderful world to throw Caden Park into. He’s not exactly prepared to join the forces of The Immortal Men, or to fight the Infinite Woman, but the story doesn’t care. He has been chosen and it’s now time to prove himself.

That’s not exactly a new story, and it isn’t explained as much as the reader would like. But this is hopefully just the first of many such adventures that Caden Park will have with The Immortal Men, a great new comic from some of comic’s greatest.