“We must do what we only dared to imagine before.”

Aquaman and his throne have something of a love/hate relationship. Arthur sometimes wants to be king; sometimes he doesn’t. Unfortunately, many writers keep their stories to the Kingdom of Atlantis. There are seven seas in the ocean, and an unlimited amount of creatures and other kingdoms to imagine. Why, then, must so much attention be paid to Atlantis? For most of The New 52, Arthur’s throne was in contention with some other King or Atlantean challenging him for what is rightfully his.

Unfortunately, the same stories and challengers keep plaguing the King of Atlantis. Rath is still on the Throne of Atlantis. The Atlantean Civil War is as epic as any other, but it’s still a little tired. Dan Abnett’s work on Aquaman has been exciting, utilizing a number of great artists to bring his stories to life. But now’s the time to give Arthur a break. Let him defeat his foes; let him sit on the throne. For years fans have been reading about Arthur battling Atlanteans or helping the Justice League to battle Atlanteans. It’s time for peace to come over the Kingdom, it’s time for another story to be told. 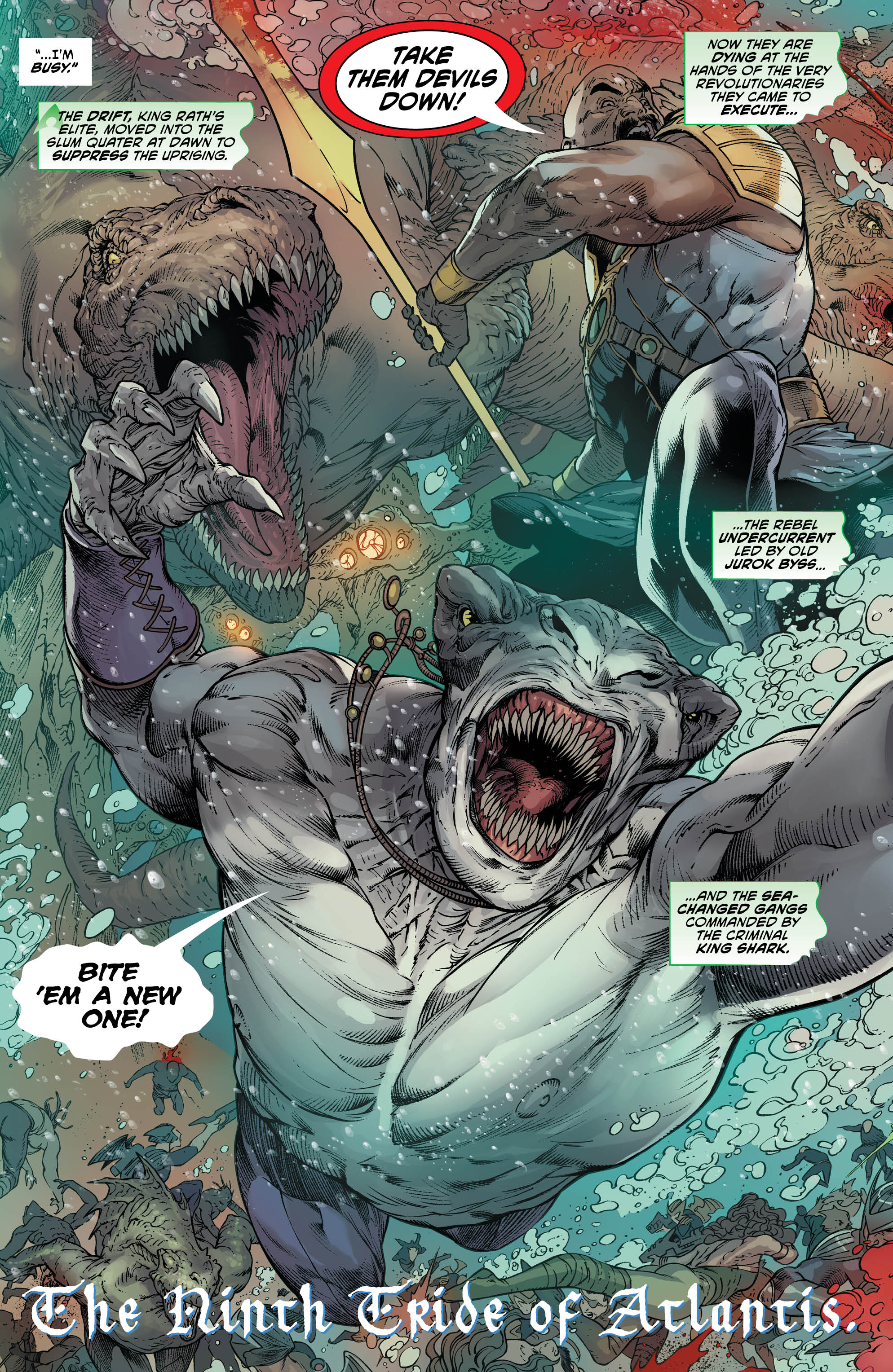 There are other ways to create a captivating or dramatic story for Arthur Curry than simply having someone take his throne.

“In the name of the King, you will perish.”

Dan Abnett is a great writer. The story structure is sound and the characterization is always on-point. But the Civil War in Atlantis has taken quite a few issues to play out. Arthur Curry has spent a long time away from the throne. But that’s been the case for years. Geoff Johns and Jeff Parker were the writers of the series in The New 52. They did a great job of turning Arthur back into the badass every comic fan knew he could be. But that was because he was an unknown King under the waves and they brought him to the surface.

Now, it feels like it’s time for him to rule. But he hasn’t gotten that chance. Instead, he’s waging a Civil War while Mera is off on her own adventure. It feels tired and almost boring. While some of the more interesting characters can pique interest, like Kadaver, they are few and far between. The drama meant to come from watching Arthur fight his brethren just isn’t there any more. Because readers have seen it so many times. 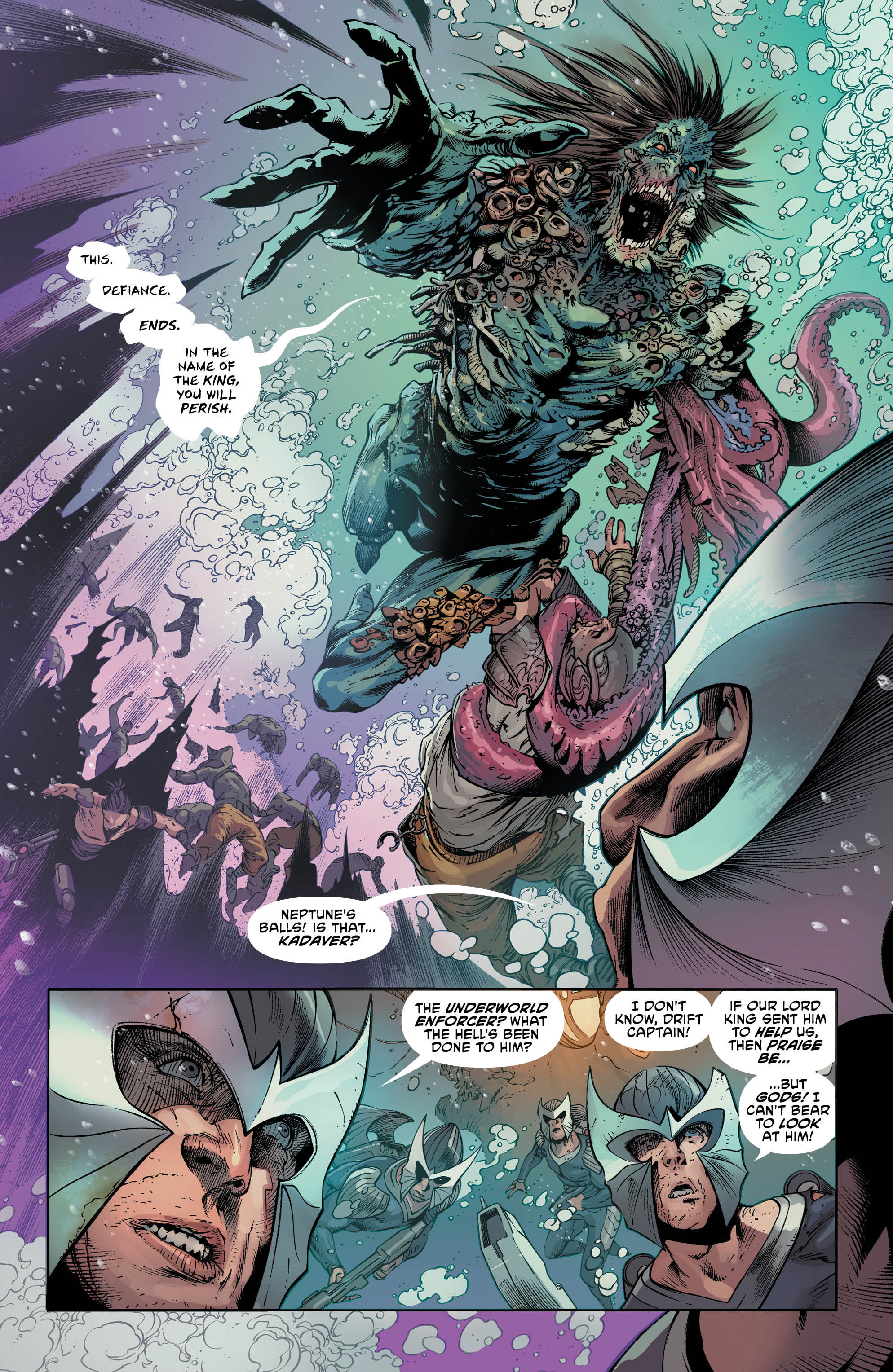 Now is the time for the King of Atlantis to be returned to his throne, like all readers know he eventually will. It’s time for him to return to Mera, or vice versa. Arthur deserves a new set of stories to star in.

“If our Lord King sent him to help us, then praise be…But Gods! I can’t bear to look at him.”

Robson Rocha can create some horrifying images. Such is the case with Aquaman #35. That’s certainly not a bad thing, when a reader is told they’re about to see some underwater zombies they expect to see something gruesome. That’s where Rocha, and inkers Daniel Henriques and Danny Miki, excel. The world of Atlantis looks incredible as it’s getting destroyed from the inside out. While the story has more than a few issues, everything from the action to the water looks fantastic. Like the Green Lantern books, Aquaman happens to be one of the most colorful books on the shelves. Colorist Sunny Gho puts the perfect touch of color on top of the pencils and inks. 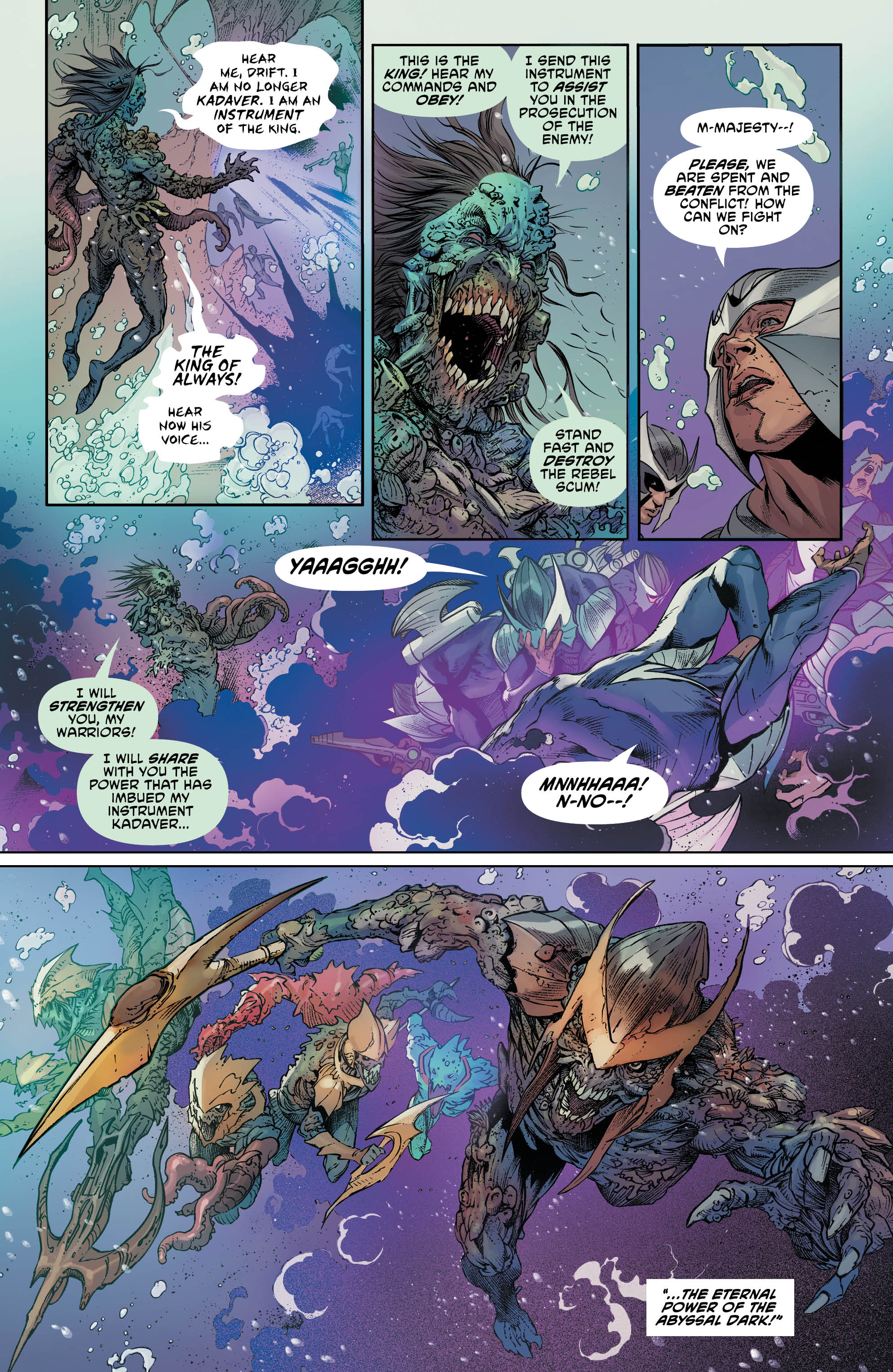 There’s no room for simplicity when drawing the intricacies of the creatures who live on the bottom of the sea. It’s a difficult task, putting that much detail into figures and even fish.

But Robson Rocha is a veteran in the business. A very talented Brazilian artist who’s worked with DC many, many times. His work on Green Lanterns with Sam Humphries solidified him as one of DC’s best. Now, he’s backing that up even more in every panel on Aquaman. Hopefully, he stays on the series for some more exciting and original stories.

Arthur Curry was born to be the King of Atlantis. Actually, he was created to be the King of Atlantis. But for some reason, writers have been trying to take that throne away from him for years. So much so, that there’s no more ways to tell that story in a unique way. No new Kings to dig up; no new challengers who will excite the reader. We’ve read Arthur defeat countless usurpers to his throne. Unfortunately, fans are going to have to read a few more.

Dan Abnett’s run on Aquaman has been great. The writer clearly knows how to write the character. But the recent Atlantis Civil War stories have felt a bit stale. Arthur doesn’t get to explore the depths of the ocean much, he doesn’t get to talk to fish or have fun. He’s always facing some Atlantean foe or ancient looking to take him down a peg or two. It’s getting boring.

Luckily, the art of Robson Rocha helps to make every page beautiful. While the story struggles, the pencils and colors will delight any reader. The action is especially crisp, beautifully displaying a tough battle between Aquaman and a former friend.

But Aquaman #35 is more yawn than gasp. Arthur has more to him than just being the King of Atlantis. It’s time to give this King more than just a crown.