PETA the well known, and polarizing animal rights group, which recently attacked the Teenage Mutant Ninja Turtles, has just released a new ad featuring The Flash’s Violette Beane. Beane portrays superhero Jesse Quick in The CW’s The Flash. She’s the daughter of Harrison Wells from Earth 2 and works with Barry Allen and his team to safeguard Central City using her connection to the Speed Force.  In the real world, actress Violett Beane teamed up with PETA to promote a vegan lifestyle in a risque photo ad.

The ad was done in collaboration with Peta2 which was founded back in 2002 during the Vans Warped Tour. The organization described themself as “the largest youth animal rights group in the world and exists for young people…who want to start making meaningful changes for animals in their everyday lives.”

In the photo, the tagline states “All Animals Have The Same Parts.” It depicts a naked Beane in the fetal position with parts of her body marked off with dotted lines. The marks are meant to mimic a butcher’s diagram. Sections of her body are labeled based on different cuts of meat. You can see loin, ribs, chuck, shoulder, and round cuts in the photo below.

In the bottom of the photo the ad also states, “Have a Heart: Go vegan.”

Check out the ad below: 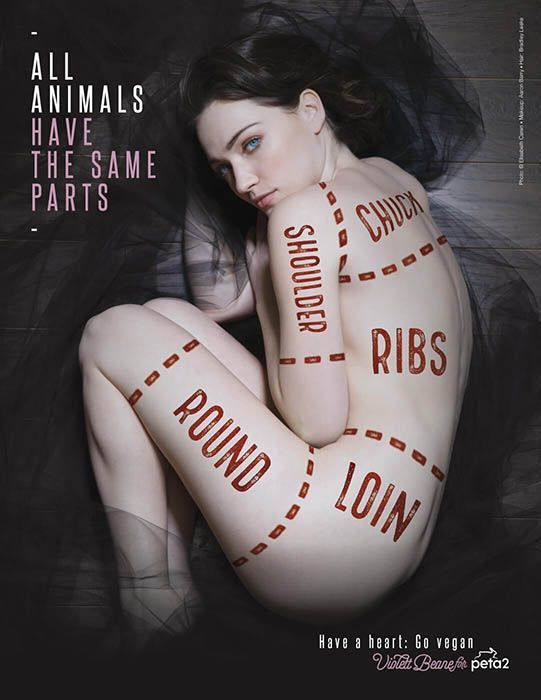 A vegan herself, Violett talked about what inspired her to join this campaign. In a statement from peta2, she states that all animals deserve respect:

“Whether it be your family dog or cat or a chicken or a pig or human beings, we all have the exact same parts,” Beane said. “We all deserve the same amount of respect.”

Beane also talked about the negatives of eating meat:

“The heaviness of meat can weigh you down mentally and physically. The amount of resources such as water and electricity that you are using to produce animals is so much greater than it is for crops. And the greenhouse gas emissions from all of the production from animals is insane. Humans are the only species that drink another animal’s milk. If you think about it we stopped drinking our mother’s milk when we were really young. Why are we drinking someone else’s?”

She also talked about the benefits of her vegan lifestyle:

“When I go to the gym, I have more energy to work out,” she said. “I feel so much better physically.”

Beane isn’t the only actress teaming up with Peta. She joins Riverdale’s Madelaine Petsch and X-Files star Gillian Anderson. Earlier this year Anderson posed nude for PETA’s “I’d Rather Go Naked Than Wear Fur” campaign. The image was displayed on a large 70-foot billboard over Penn Station during New York Fashion Week.

So what do you think? Does Jessie Quick have a point? Or are you like me, and now have an urge to smoke some brisket? Let me know in the comments below!