A Triage of Terrors

While Tom Holland is spoiling the live-action Miles Morales, the animated version is still a mystery. Miles Morales is the star of the new animated film Spider-Man: Into the Spiderverse. The film is produced by Phil Lord and Chris Miller, which is already an exciting prospect. They have roots in animation after all. But more importantly, it’s the big screen debut of one of the best comic book characters created in the 21st century. But just who will be heckling our hero on this adventure? Two of the most famous Spider-Man villains ever! And the Prowler…

Footage for the film was screened at CinemaCon. Thanks to JoBlo, we know what three villains will be joining Miles Morales on the big screen!

Green Goblin and Kingpin are two of the most famous villains ever. They’ve both had multiple live-action versions of the character. In fact, Vincent Di’Onofrio has been killing it as the Kingpin for a couple of years now. Green Goblin has been pivotal to almost every live-action depiction of Spider-Man. Having them in this animated version will certainly add weight and importance to the film. While the Prowler is one of the oldest Spider-Man villains, he certainly hasn’t gotten as much attention as the others. He’s an engineer with some great gadgets who looks a little like Spidey himself. Who knows how he’ll factor into the film but it’s great that he’s joining the team.

However, the other important detail is that “ultimate” tagline. That word is possibly the most important of all. Implying audiences will see a version of these characters never seen on the big screen.

The Ultimate tagline referred to an updated set of Marvel comics. It introduced brand new and “modern” versions of their characters in an alternate universe. As you can imagine, they were a mix of good and bad. But the designs were always stellar and memorable. Bringing the Ultimate versions to the big screen, as Miles Morales’ adversaries, is a great way to change it up with two of Marvel’s most famous villains. The Ultimate Kingpin will be memorable to anyone who was a fan of Spider-Man: The Animated Series.

The massive character with his ridiculous white suit was one of the most dastardly villains on Saturday mornings. But the ultimate Green Goblin won’t be quite as memorable to most Marvel fans. 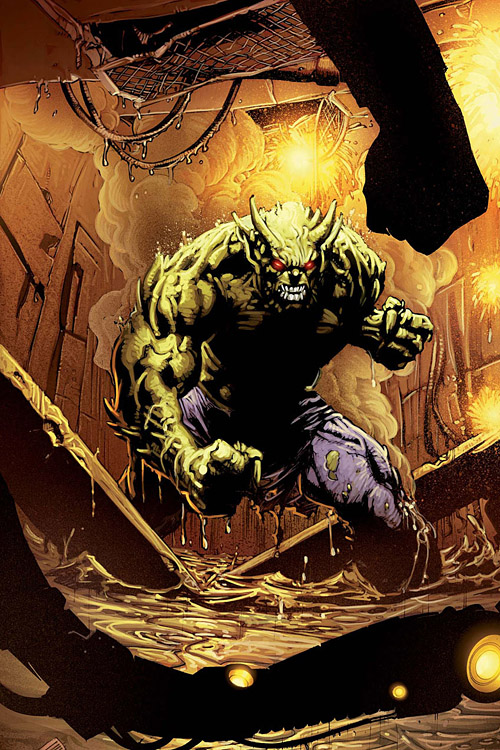 Yeah, that doesn’t look anything like the Green Goblin film-goers know and love. Never the less, that’s him. A mutated monstrosity that resembles the Hulk or  Etrigan the Demon than the demonic glider formerly known as Norman Osborn. But that’s been done before. Fans have seen more than a few Osborns don a green suit and glider. There’s nothing to say they won’t see the Green Goblin facing Tom Holland someday.

So it makes sense that the studio would want to change up the design for the upcoming film. It might hurt some of the theories that this film will somehow connect to the MCU, but it assures audiences that Spider-Man: Into the Spiderverse is a brand new Universe to explore.