Diversity & Comics aka Richard Meyer, Jon Malin, and Brett R. Smith have raised an astronomical amount of funds for their upcoming graphic novel, Jawbreakers – Lost Souls. As of this writing the IndieGoGo campaign lists the trio have raised $198,480 from 5,497 backers. But that’s not the only good news for the creators, they also landed a publishing deal with Antarctic Press, the same publishers behind My Hero Magademia, Gold Digger, Black Hops, and more.

The news that Jawbreakers was picked up by Antarctic Press had many fans thrilled.

Thank you. I never do this but I already ordered one copy of the book through the campaign and I will be ordering another through my LCS just to get the other cover. Thanks a bunch.

Awesome My Hero Magademia was great and now Jawbreakers, that’ll just be even more epic

I”m going to order 3 copies if my comic shop will let me.

Great news! Congratulations to everyone!

Thanks for supporting all art! Well done @Antarticpress

You will be going down in history as the company that began the restoration of an industry.

Remember, if you’re copping flak, you’re over the target.

Glad to know there’s some decent publishers in this industry.

However, before Antarctic Press made it official they would be publishing the book, a number of comic book shop owners were already planning to boycott the book. They also planned to publicly decry the publisher who planned on printing the book. A number of them also promised to refuse to stock the book even if a customer requested it.

Heather Harris McFarlane of Magic Mirror Comics in Bothell, Washington said she would “drag and dunk” the publisher. And she would do it “as loudly as possible.” She also said she was “REAL loud.” McFarlane wasn’t the only one who planned to “drag” the publisher, now confirmed to be Antarctic Press. Megan Rae Jordan of Atlantis Fantasyworld in Santa Cruz, California also said, “But if I’m wrong I will 1000% drag any publisher interacting with them in a ‘professional’ capacity.” Wess Gregg of of Sanctum Tattoos and Comic in Birmingham, Alabama agreed with Jordan saying, “Respect. I count on doing the same.” 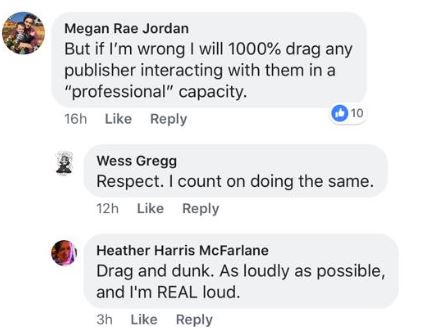 McFarlane also promised to not buy anything from the publisher saying, “Whoever publishes it is losing my business, and my customers will know why.”

However, Wyn Buckley also of Magic Mirror Comics said customers would need to pay a “full deposit up front title.” So, there might be some discussion as to whether they will stock the book or not at Magic Mirror.

McFarlane wasn’t the only retailer who promised to not stock Jawbreakers – Lost Souls. Ryan Higgins of Comics Conspiracy in Sunnyvale California said, “I will not order or stock this product regardless of special orders, and will let whoever publishes it exactly what I think about them.” 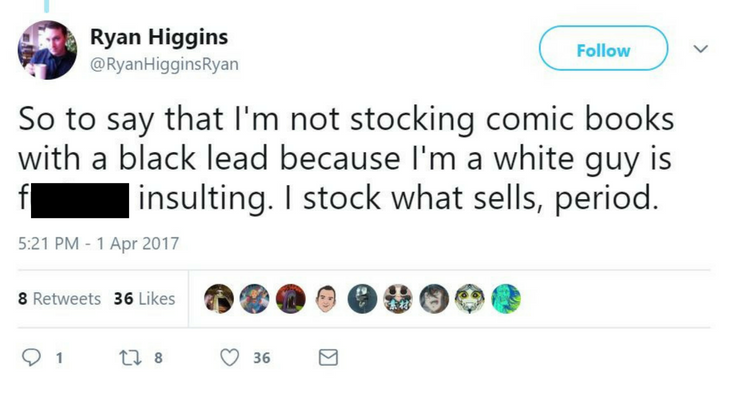 Another comic book shop owner, Jackob Sareli, who owns Comikaze in Israel also said he would not be stocking the series.

Michael Glen Clark of Showcase Comics Swarthmore in Swarthmore, Pennsylvania had advice for other shop owners who won’t carry the book, “You say ‘Sorry, we don’t carry that book.’ and leave it at that.”

However, Bruno Batista of Big Bang Comics in Ireland seems to support a total blacklisting of Antarctic Press because they will be publishing Richard Meyer, Jon Malin, and Brett R. Smith’s Jawbreakers – Lost Souls.

He would then go on to publicly decry Antarctic Press calling their action to publish the public “shameful” and that Antarctic Press is “Siding with serial harassers that have caused this industry nothing but pain and grief.”

Sad and disapponting to see any comics publisher support and side with serial harassers. Shameful, really. But hey, you made your choice, Antarctic Press. https://t.co/WiVJk429kT

Again, just to stress this out, @AntarcticPress, you are siding with serial harassers that have caused this industry nothing but pain and grief. I hope it’s worth it.

If a retailer doesn’t want to stock your book, that’s their right as a business. It sucks, but *every* creator has to deal with this. Welcome to the wonderful world of comics.

And personally, I actually agree with Shalvey. If a retailer doesn’t want to stock your book then it sucks, but it should be their right. They shouldn’t have to be forced to buy something in order to sell it to a customer. Obviously, customers also don’t have to shop at your store anymore either.

However, what Declan and I believe in, is not how the United States operates anymore. I can’t speak for Shalvey’s Ireland, but the Oregon Court of Appeals ruled that “two Gresham bakery owners discriminated against a gay couple by refusing to make them a wedding cake, violating Oregon law.” In fact, a similar case in Colorado is being heard at the Supreme Court. The NAACP Legal Defense and Educational Fund is arguing that bakeries and businesses can not discriminate against customers. “There is no limiting principle that would permit exemptions for ‘artistic’ or ‘custom’ products without eviscerating public accommodations law.” Floyd Abrams who is the Senior Counsel at Cahill Gordon & Reindel commented on the case in Colorado saying, “The Colorado statue…regulates the conduct of selecting customers. When an artist sells a message, he must take all comers.”

That seems pretty clear that these retailers might actually find themselves in legal trouble depending on the result of the Supreme Court case that is expected to be ruled on some time this Summer. They might not be in the wedding cake business, but they are refusing a product that a customer wants. It’s the same principle involved in the baking case as Abrams makes crystal clear, “When an artist sells a message, he must take all comers.” Thus when a comic book shop sells comics, they must take all comers who purchase and publish them.

To put it more plainly, if a customer wants to purchase Jawbreakers – Lost Souls and the comic book shop has refused to carry the book, they are acting in the same way as the baker who has refused to bake the cake.