Comic book shop Variant Edition located in Edmonton, Alberta was vandalized last night. The owner of the shop tried to connect the robbery to their public announcement that they would not stock Diversity & Comics aka Richard Meyer, Jon Malin, and Brett R. Smith’s Jawbreakers – Lost Souls graphic novel which will be published by Antarctic Press.

Variant Edition publicly made their announcement after a number of comic book retailers were exposed promising to boycott the book and publicly shame the publisher.

They said the book does not appeal to their demographic, and they will also “not actively support creators who have promoted harm to friends, colleagues and strangers.” However, they did say that “pre-paid orders will be accepted for those interested.” So, they weren’t fully boycotting the book and customers could order the book through the shop, they just had to pay for it beforehand.

We will not be stocking the upcoming @AntarcticPress comic JAWBREAKERS on shelf.

It does not appeal to our demographic, and we will not actively support creators who have promoted harm to friends, collegues and strangers.

They also posted their store policy which doesn’t really make any sense. I’m not sure how kicking someone out of your store for being intolerant makes you tolerant.

Hi there. A reminder that no matter who you are, we’re here for you, offering a safe space. Unless you’re intolerant, then you can GTFO.

After they made this announcement yesterday, co-owner of Variant Edition Brandon Schatz posted a number of photos to Twitter showing his store had been broken into. Interestingly enough he included a 1 star review of his store which read “Don’t do business with bullies and twitter crusaders.” It’s unclear why exactly he included the review, but it appears he’s trying to make a connection between his public announcement about not carrying Jawbreakers and his store being vandalized and broken into.

Our day so far. pic.twitter.com/uXn7sgICei

In fact, Big Bang Comics’ Bruno Batista placed the blame squarely on people who follow Diversity & Comics saying, “PEOPLE, STOP MOLLYCODDLING THE DIVERSITY AND CMX GUYS, THEY ARE VIOLENT AND THEY WILL END UP HURTING SOMEONE!”

PEOPLE, STOP MOLLYCODDLING THE DIVERSITY AND CMX GUYS, THEY ARE VIOLENT AND THEY WILL END UP HURTING SOMEONE! https://t.co/sGKRrKOER4 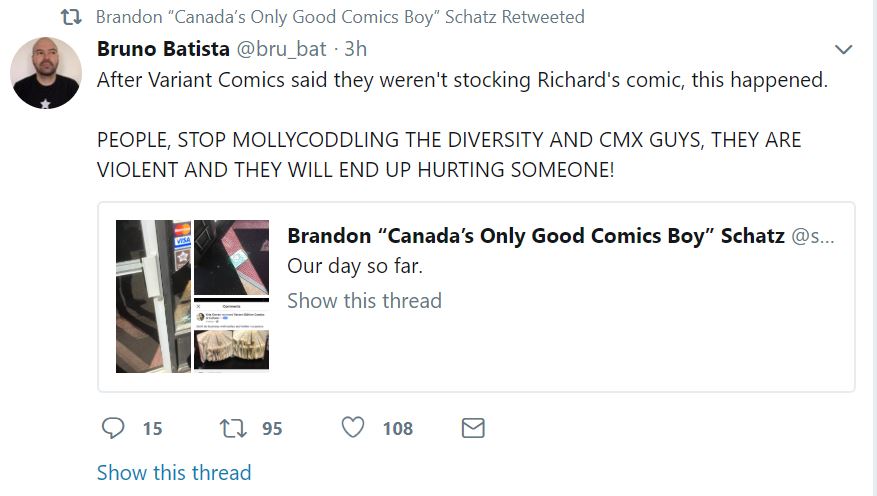 Batista would claim Diversity & Comics followers threatened violence against retailers. He provided this Tweet as evidence:

This was one of the tweets I got in the middle of all of this.
They threatened violence on shops that wouldn’t carry Richard’s comic.

Variant Edition said they weren’t going to stock it for the shelf.
Then you know what happened to their store. pic.twitter.com/m8yVaT5Iu7

Comic book creator Ales Kot seemed to agree with Batista as he claims he reported the account to Twitter.

hey @jack @TwitterSupport , I tweeted at you yesterday asking to look at this account — https://t.co/4V8nFD3pC5

today a store got a window broken. you’re either not paying attention or you’re avoiding confronting an account of a person who is helping create these situations.

Schatz would later provide an update about the incident indicating the store was robbed.

We were broken into last night and cash was taken.

No other businesses in the area were targeted.

The rest is what it is. We’re safe, but we don’t feel safe.

We appreciate people asking if they can donate: kind words are all we require at this time. Thnx

As of right now, it does not appear there is any connection to the robbery and Variant Edition’s public announcement saying they would not carry Jawbreakers – Lost Souls. The only connection appears to be one made by Schatz by including the review, and then Batista explicitly insinuating the robbery was done by Diversity & Comics fans.

hang on lemme just find proof that those two things are related: pic.twitter.com/f4Z2XtXq7d

A number of folks did offer to pitch into a GoFundMe to repair the damage:

Ah, hell, Brandon. I’m sorry. If you decide to start a small gofundme to replace the window, I’d be happy to kick in.

This is awful. Please do let me know if you’re accepting donations to fix the damage.

I’m sorry this happened to you guys! If there’s anything I can do, please let me know! <3

So sorry this happened.
Your store sounds wonderful, and I’d like to help in any way I can.@nathanfairbairn, if you’re donating to repair the damage, let me know the cost and I’ll cover the rest.

However, Schatz said the store would be able to cover the cost and they are not looking for any money.

The shop does, but the premiums and the deductible would make that a more expensive option. We aren’t looking for money, as we’re lucky to be able to cover it. Mostly it’s all emotionally draining more than anything.

It’s terrible that someone robbed their store, but it’s also terrible that Schatz and Batista are trying to insinuate that this crime is connected to Diversity & Comics in what appears to be a pure attempt to malign his character after the success of his IndieGoGo.