Comic Book creator and letterer Rus Wooton, who has worked on a number of Image Comics’ books including Invincible, The Walking Dead, Thief of Thieves, and Gasolina went on a profanity-laced rant attacking his fellow comic book creators. The rant seems to stem from Diversity & Comics aka Richard Meyer, Jon Malin, and Brett R. Smith’s wildly successful fundraising campaign for their upcoming graphic novel Jawbreakers – Lost Souls. It also comes in the wake of a number of comic book retailers being exposed planning to boycott the book when it was announced Antarctic Press would publish the book. 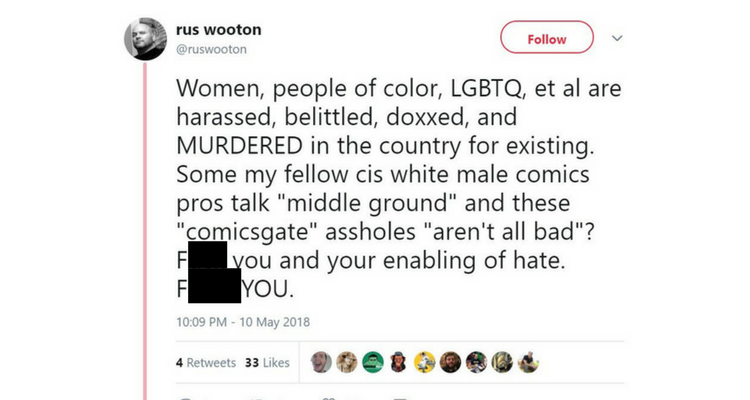 There is no “middle ground” to be found with white supremacist misogynist hate-mongers. None. Yet time and again, I see white dude pros in comics telling women, POC, LGBTQ, et al to simmer down or some shit every time HATE MONGERS rear their ugly heads again. 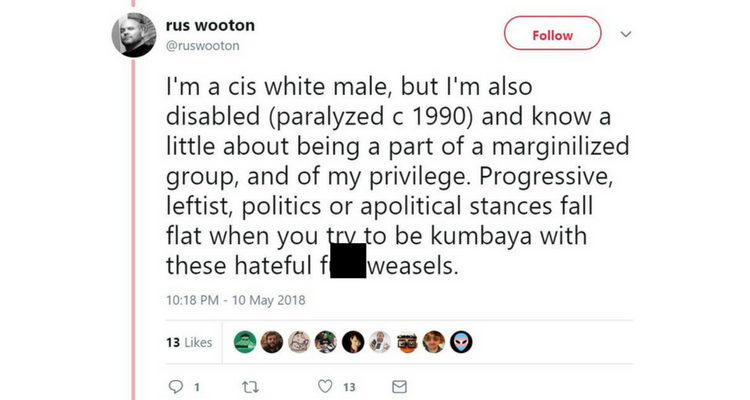 …learned that there’s no talking-it-out when getting shoved into your locker or against the bike-rack or tag-teamed on the playground by two bigger kids. You have to fight back and fight for those being attacked. Shove your “getting along” up your ass w/”comicsgate” assholes.

One last thing (for now) – This rant is NOT left vs right, or liberal vs conservative; I shouldn’t have to say that, but yeah. This Diversity&Comics asshole, Ethan Van Sciver, and their handful of online acolytes are not conservative — they are hate-mongers.

It’s unclear who exactly Wooton is referring to. It’s possible he could be referring to Sean Gordon Murphy who’s openly stated he has a “no block” policy. Blocking people on Twitter became a common practice among a number of creators who didn’t want to interact with their fans and potential customers because they claimed they were being harassed.

You have the right to run your Twitter however you want. If you’re being threatened and worried for your safety, then block away. 99% of my comic friends block people for whatever reasons, and I respect that choice.

HIGH ROADING is what I do with some trolls–I’ll “quote” them so everyone can see my response, and I’ll be 100% nice by displaying perfect customer service.

Stand up for your values and condemn who you want, but I feel like blocking is polarizing/divisive. Most importantly, it’s not fixing the problem. A capitalist would say that not only are you losing that costumer, but 10 of their friends when they start complaining about you.

Murphy also pointed out that comics industry relies on capitalism.

Yes, I’m followed by people I don’t like. And if I see them harass another follower I’ll say something. But blocking them is saying “fuck you”, which might feel good…

And while they can’t publicly say so, publishers and stores agree. Because you’re not only blocking YOUR customers, you’re blocking THEIRS.

He might also be referring to Liam Sharpe who has also seen success on Wonder Woman as well as The Brave and The Bold: Batman and Wonder Woman.

Sigh. You know – I’m so sick of everything these days. I can’t figure out everybody I need to block or not – it’s impossible. If somebody loves and shares my work I like and share that tweet. It’s clear what I stand for in everything I say and do. 🙁

Sharpe has specifically told folks not to use him to push political points of view and he uses his Twitter account to share his work as an artist and creator.

Please don’t copy me in or use my account or name to represent political points of view. I’m here as an artist and creator to share my work with my fans. My views are my own, and I’ve been very clear about them. Thank you.

I am a writer here to entertain everyone. I like to make comics I would want to read. My personal politics aren’t applicable to the conversation. I do my job to the best of my ability and I hope you all dig them. That being said, I don’t cotton to cruelty. https://t.co/tP9F04IJL1

While it’s unclear who Wooton is referring to, he made his message loud and clear. He’s not going to try and be civil anymore. He’s going to “fight back” and “fight for those being attacked.” Once again, he doesn’t really say how he is going to fight. But we’ve seen people threaten Ethan Van Sciver with physical violence before and Marvel writer Mark Waid conspired to harass Richard Meyer at Baltimore Comic Con. Another Image Comics writer Michelle Perez also wished death on Richard Meyer. It’s not out of the realm of possibility that Wooton is calling for similar actions.