Antartic Press announced they would no longer be publishing the book in a statement on Facebook.

Many forces, many of them should be viewed with great trepidation about how our society acts, have led us to this decision. We do not take this decision lightly as we do believe that there should be separation between “ART” and the “ARTIST” and that separation has been blurred in our decision.

We appreciate all our supporters and detractors in this process.

Thank you for taking the time to read our statement.

This statement will be removed in 7 days.”

The news came as a surprise as Antarctic Press had just announced they would publish the book on May 9th.

There was a plot by a number of comic book stores to boycott Jawbreakers – Lost Souls and many of them promised they would attempt to pressure the publisher.

Even Marvel Comics writer Mark Waid, who is currently writing Captain America and is slated to write Marvel’s upcoming Doctor Strange and Ant-Man and The Wasp series, got involved and was making personal phone calls to Antarctic Press. In a now deleted Facebook post, Waid appears to have urged Antarctic Press to drop Jawbreakers – Lost Souls or at the very least he was accusing Diversity & Comics, Jon Malin, a former Marvel artist, and Brett R. Smith of telling their followers to “theaten the employees of stores, and/or harass and one-star-review-bomb stores, that don’t order their product.” 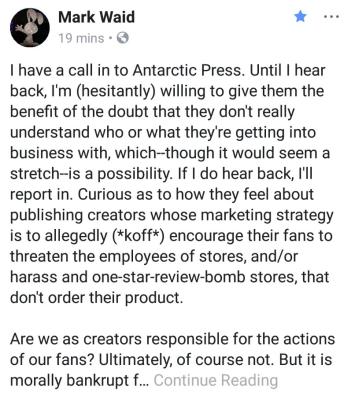 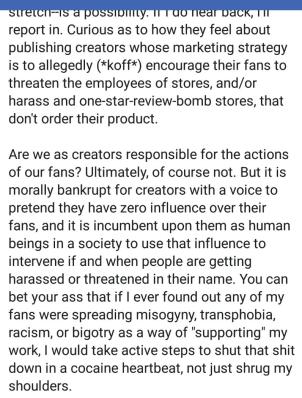 Waid seemed to change his tune quite rapidly for some reason. 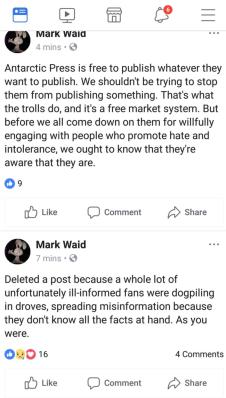 Diversity & Comics had actually told his fans not to contact the store owners.

Note: please do not contact any of the comic shop owners I am listing or harass them.

Also, none of these people are the ones I promise not to identify their identity

And given Waid’s actions Diversity & Comics appears to be taking legal action and has promised to contact the Federal Trade Commission.

Businesses are supposed to compete on the shelves not by intimidating smaller publishers through industry weight and rumors.

What Mark Waid and the other SJW comic book pros did yesterday to Antarctic Press was not only unconscionable and unethical, but possibly illegal as well.

I’m calling the Federal Trade Commission on Monday to file a complaint. https://t.co/FWzOyfCQwn

After Waid’s Facebook posts and subsequent shut down of his social media profiles, we contacted Antarctic Press in order to discover the details of his phone conversation. They didn’t reply, but they did issue another public statement saying Mark Waid did not threaten them in the phone call and that nobody contacted Marvel’s Editor-in-Chief C.B. Cebulski or anybody at Marvel. They firmly state, “We have not been bullied into a decision by any comics pro.”

After Antarctic Press dropped Jawbreakers – Lost Souls, Diversity & Comics took to YouTube to announce that he will be creating a brand new comics company that is currently going by Splatto Comics.

At around the 14:30 mark, Diversity & Comics announces, “We are starting our own company called Splatto Comics, Splatto del Gato Comics for legal reasons…”

He goes on to describe what the company will be about:

“Splatto Comics will be obviously comic centered. That’s what we love. That’s our thing that we do. It’s going to be a variety of things. Exclusive crowd-funding campaigns, for example my Iron Sights graphic novel might only be available in IndieGoGo. The 112 page one is exclusive. It will not be in stores in that 112 page thing. The only way you can ever get this is through this IndieGoGo. We are going to do exclusive IndieGoGo’s for something like Iron Sights probably. Moving forward on a way to get it into brick and mortar stores like Barnes & Noble and Amazon and things like that. And then we’re also going to go for things like maybe the Jawbreakers Digest the traditional route into comic book stores through Diamond.”

Are you excited about the new company?