“You and I are destined to do this…forever.”

Heath Ledger’s Joker took the world by storm. The Dark Knight wasn’t just an incredible film, it changed things. The Academy, superhero films, crime thrillers – none of these would remain unchanged by the ripples caused by Christopher Nolan’s masterpiece. Critics, intellectuals, and fans will be dissecting the film for years. One such fan is none other than Patton Oswalt. Everyone’s favorite superfan has had more than a few famous theories in the past.

Some are fun, some are creepily on point. That’s what happens when someone as smart as Oswalt focuses his attention on the world of Geek. Now, he’s decided to divulge an awesome new theory about Heath Ledger and his Joker. One of the interesting aspects of the film was its possible political implications.

The anarchy that the Joker creates that disrupts normal society clearly resembles terrorism. Batman’s tactics with the illegal use of Sonar that hacked the phones of the people of Gotham. Could that be a metaphor for the US Government’s reaction and response to attacks on our nation? Could be. Christopher Nolan is the kind of filmmaker intelligent enough to put that kind of subtext in a superhero film without a lot of people noticing. Well, Patton Oswalt noticed.

The actor recently posted an interesting theory about one of the greatest film villains of all time on his Facebook page.

“I’ve always liked the theory that Heath Ledger’s Joker in Christopher Nolan’s DARK KNIGHT is a war veteran suffering PTSD. His referencing a “truckload of soldiers” getting blown up, his ease with military hardware, and his tactical ingenuity and precision planning all feel like an ex-Special Forces soldier returned stateside and dishing out payback. I love films that contain enough thought and shading to sustain post-screening theorizing like this.

But I just re-watched THE DARK KNIGHT, and another wrinkle came to mind about The Joker.

He seems to be very good at the kind of mind-f***ery that sustained, professional interrogation requires. His boast about how “I know the squealers” when he sees one. The way he adjusts his personality and methods depending on who he’s talking to, and knowing EXACTLY the reaction he’ll get: mocking Gamble’s manhood; invoking terror to Brian, the “false” Batman; teasing the policeman’s sense of loyalty to his fallen, fellow cops; digging into Gordon’s isolation; appealing to Harvey Dent’s hunger for “fairness.”

He even conducts a “reverse interrogation” with Batman when he’s in the box at the police station — wanting to see how “far” Batman will go, trying to make him break his “one rule.” He constantly changes his backstory (and thus who he is). To Gamble and his henchmen, he’s an abused child (figuring that they were also the products of abuse and neglect). To Rachel, he’s a man mourning a tragic love — something she’s also wrestling with.

In the end, he ends up trying to mind-f*** an entire city — and the city calls his bluff. Or is that what he wanted all along? He plummets to his seeming death, laughing like a child. And when he’s rescued by Batman, the one individual he couldn’t manipulate or break, he’s blissful and relieved (and, visually, turned on his head). Even the language he uses when saying goodbye to Batman — describing their relationship as an “irresistible force meeting an immovable object” — is the kind of thing an interrogator would say, ruefully, about a fruitless session.

It didn’t matter how he got those scars, turns out.” 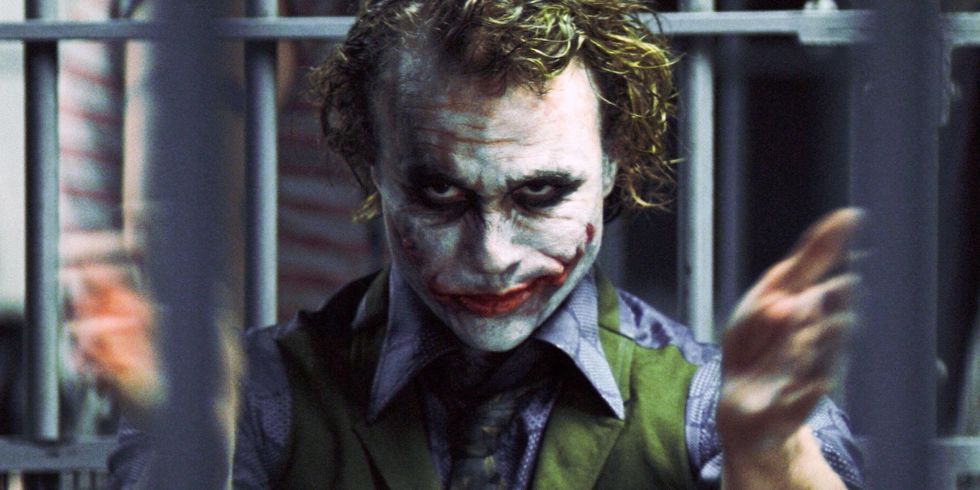 That’s a lot to take in. It also makes so much sense. The Joker is clearly a master at manipulation. Possibly even someone with a vast knowledge of psychology. Remember the last time a superhero film wasn’t about a blue laser beam shooting up into the sky at the end? That’s right, almost every superhero flick is plagued with such nonsense these days. But not The Dark Knight. The climax of the film is the Joker trying to get Gotham’s citizens to turn on each other and kill a few hundred people.

It wasn’t the end of the world; it wasn’t a nuclear bomb. It was psychological warfare that was meant to tear down Batman’s sense of morality. His belief in Gotham and humanity was his defining feature. Arguably one of the few things that made him so different from the Joker. If the Joker was an interrogator or former spook (CIA operative), he would know exactly what buttons to press to get a reaction. And boy, did Heath Ledger’s Joker get a reaction.

Patton Oswalt’s theory makes so much sense it’s scary. Not only that, it all but confirms the complex but unmistakable context at the center of the film. The Dark Knight hits its 10 year anniversary this Summer. Hopefully, more mysteries continue to reveal themselves as time goes on.

What do you make of Patton Oswalt’s theory?