“Where the hell is the Justice League?!”

That isn’t an easy question for Amanda Waller to answer. It actually isn’t an easy question for anyone to answer. That’s part of the fantastic journey that Justice League is taking under the pen of writer Scott Snyder. The Source Wall is breached, the Mad Titans are loose wreaking havoc across a cosmos the Justice League isn’t all that familiar with. But Brainiac recruited the most powerful, and popular, DC superheroes and villains for four unique teams. Those teams have already begun to play a significant role in the success of Snyder’s Justice League series. Justice League: No Justice #2 is another exhilarating build to the new series.

Nothing’s going well for our heroes. After being thrown together, thrown across the Universe, and pitted against the Mad Titan, they’re understandably stressed and worried. Our greatest heroes against giant entities of immense power. Sounds like a dire situation, right? Wrong. 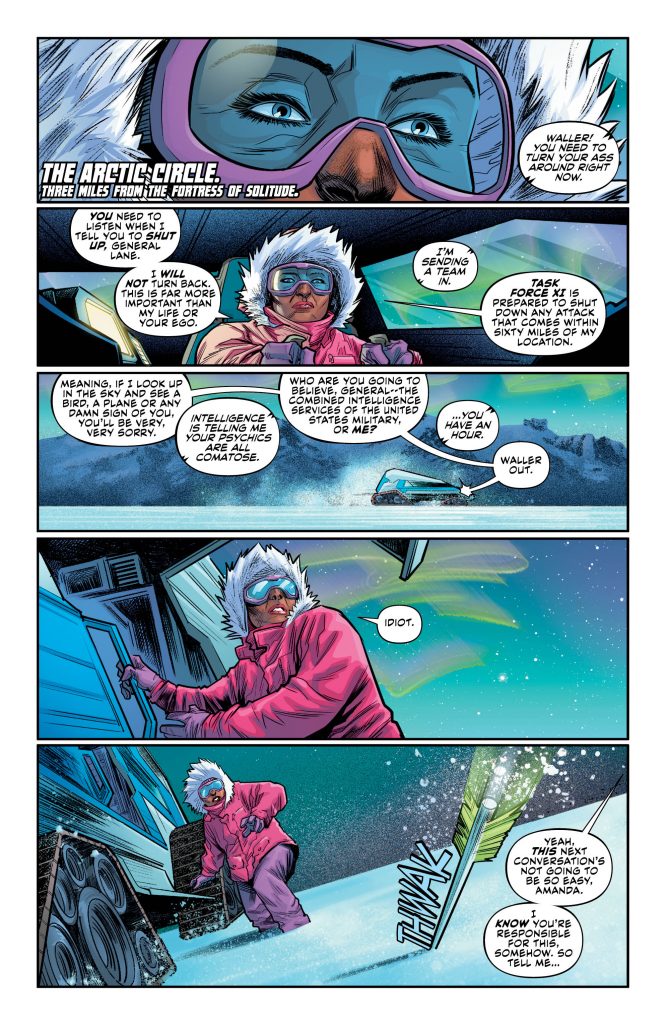 Snyder’s clever tone keeps the story uplifting – more like a big scale, tent-pole blockbuster than an event comic. Snyder’s fondness for the Justice League animated series is clear. This is a lighthearted fun adventure that can only lead to more lighthearted and fun adventures. A promise that Snyder’s run will be unlike any of his previous work, giving these newly revamped heroes a classic touch.

“I was going to say, it’s the right decision for now. We have a world to save.”

Strangely courageous words coming from Lex Luthor. But that’s the fun of Justice League: No Justice.  It’s a combination of your favorite characters thrown together in teams you never knew you wanted. The first issue had some minor flags, but this second issue is another beast altogether. Scott Snyder loves chemistry. The thought process behind these teams must have been incredibly fun because it shows. Lobo is just as relevant and necessary as Beast Boy. Robin can chime in just as readily as Cyborg. From page to page, the leaps and bounds the story makes has nothing to do with distance, it has to do with character work.

Like Infinity War, No Justice is juggling a ridiculous number of characters. Making sense of these teams could be a difficult task, but Snyder makes it easy and fun. He blends humor with the wonderful and curious mystery behind Wisdom and the other Mad Titans. Even though this will lead into his Justice League series, it pulses with an exciting energy all to itself. It’s a perfect companion piece to the much darker team book, Dark Nights: Metal, that just finished a few months ago. 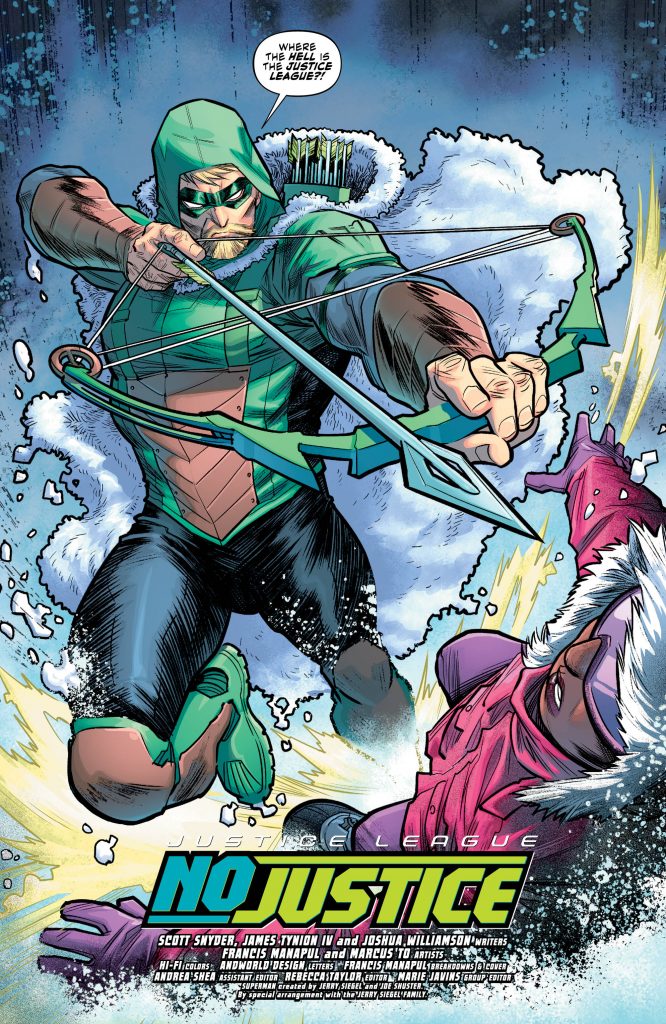 Green Arrow makes a needless and silly decision early on the comic, which seems a bit out of character. But it doesn’t take away from the great story or the excitement of his pairing with Amanda Waller. Somehow, Scott Snyder went from never having written a team book to being on the best team book writers out there.

“You’re saying it’s a Mystery?? I’ll show myself out.”

Anyone who’s read Bounding Into Comics reviews knows we’re big fans of Francis Manapul. He’s among the many talented DC artists creating wonderful stories. Yet Manapul is in a league all his own. With a brushstroke and pastel style coupled with broad and deliberate lines. It’s a heavy contrast with the many lines of someone like Jim Lee. Manapul’s panels have a dreamlike essence that can make the reader feel like their floating alongside their favorite heroes. Or, in this case, exploring the universe with them.

Marcus To joins him on art and Hi-Fi on colors. To somehow manages to keep up Manapul’s high level of quality giving his own unique style that can still seamlessly stand next to the art of Francis Manapul. The differences aren’t noticeable, but they don’t matter. The problems that DC and other publishers have had in the past with multiple comics artist stems from varying levels of quality and completely mismatched styles. They’ve spent years working on that. Apparently, the weekly series Future’s End and Batman and Robin Eternal were forerunner for projects like this.

Manapul will probably always be the best at coloring his own work, but Hi-Fi does a great job. The cosmos are explored to a great degree in Justice League: No Justice #2, and it looks great.

DC has come to rely on certain writers and artists over the years. Sometimes it happens naturally, like finding a young writer or artist and allowing them to grow in one of the top publishers. Sometimes, it’s by a massively popular writer moving from one publisher to another in different stages of their careers. It’s no telling whether or not these folks will stick around, but their talents are clearly appreciated for the time being. Names like Scott Snyder and Francis Manapul continue to appear on the biggest titles DC releases.

Why is that? Because time and time again they prove themselves to be some of the best in the business. Maintaining styles that are unmistakably their own. Crafting characters that couldn’t possibly be written or drawn by anyone else. That’s part of what makes Justice League: No Justice #2 so special. The talent in these pages is simply out of this world and is as stellar and heavenly as the story contained within the pages. Where Dark Nights: Metal was dark and dreary, this is fun and entertaining.

Though the world hangs in the balance, it’s not one of imminent evil or dread. It’s one that simply forces these heroes and villains to get together in a pretty damn entertaining way. Snyder and Manapul are superstars. The hits just keep on coming.