“I’ve never been one to go looking for danger.”

Well, well. Look what we have here. Scott Snyder’s Dark Nights: Metal continues to have a lasting effect on the DC Comics Universe by growing more comic series and new characters. Now, one more team is getting a resurgence. The Challengers of the Unknown is an old comic. A team suspended from death, somehow on the brink of life. People who aren’t living or dead being tasked with “fixing” certain issues along the magical, fantastic or scientific realms. It’s an interesting concept to say the least. Now Snyder, Aaron Gillespie, and Andy Kubert have brought the team back from the dead with New Challengers #1. 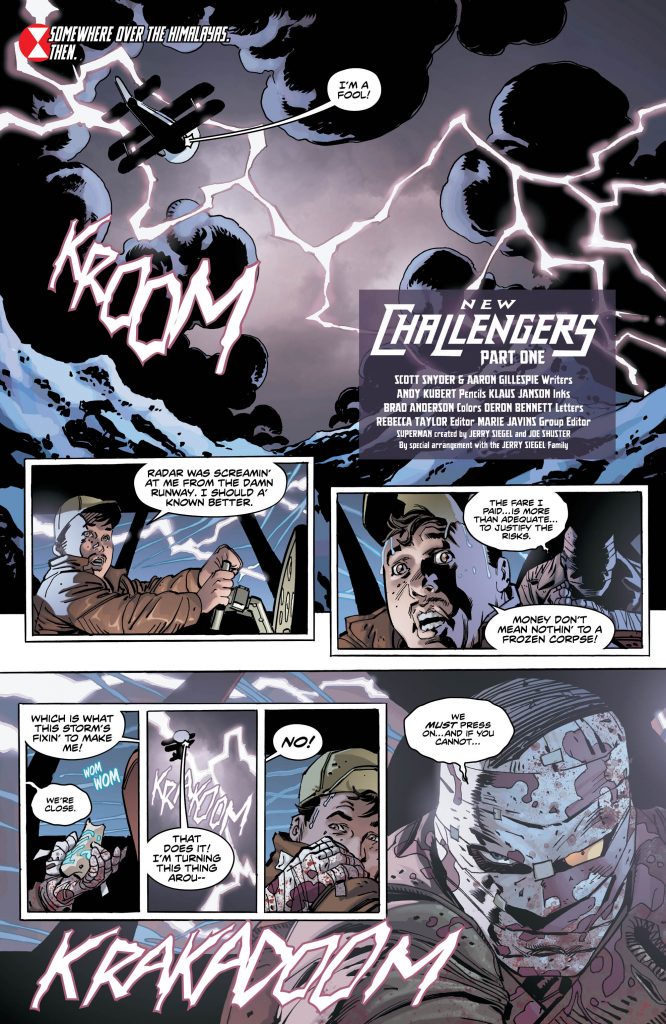 Battling the unknown is a tough job for anyone. Luckily, the New Challengers are dead! Well, not lucky for them, I suppose. The death-defying characters all deserve their place among the team. Why? Because they’re do-gooders. They’re the kind of people who risk their lives and jump at monsters which makes them the perfect members for this oh-so-ridiculous team. The story they’re thrown into isn’t familiar because, like any great series, Snyder and Gillespie keep the bulk of the cards up their sleeves for the next issue.

This is the kind of story that only independent publishers are printing with the limitless potential of countless worlds and an artist who’s capable of bringing them to life. Thankfully, DC decided to take a change on New Challengers, one of the best debuts this year!

“If my death was the beginning of a new life, it would be irresponsible to waste it.”

Trina Alvarez is having one heck of a day. First off she’s dying, but she’s recruited into a team that lives on the precipice between life and death. Fighting against monsters and super-powered beings is what comes with living in this Universe! But Trina, and the rest of her new team, are made to face these demons.

The reason this group was brought together is unknown. The rest of her team is…unknown. These are the Challengers of the Unknown, after all. What’s most important is every page pulls you to the next. Inviting you to enjoy and revel in that mystery. The rollercoaster of New Challengers #1 takes off on the very first panel. Every exhilarating action sequence is beautifully realized and orchestrated. The dialogue is funny and thought-provoking, without giving too much away.

How this will play out is unclear, but right now they’re the stars of a great and entertaining team comic that has worlds of potential.

“Death is just another adventure?”

Andy Kubert, Klaus Jansen, and Brad Anderson are legends. They contributed to some of the most important stories in the last few decades of DC. Together, they helped make The Dark Knight Returns: The Master Race a worthwhile read. However, not every line is perfect in New Challengers. It feels as if Kubert’s style may have borrowed a bit too much from that of Frank Miller. Some figures and expressions are a little off, but it does little to hamper the incredible action and design. The gorgeous display of worlds and oddities in this first issue is staggering. But most importantly, every panel is rich in beautiful detail and color thanks to the inks of Jansen and the colors of Anderson. 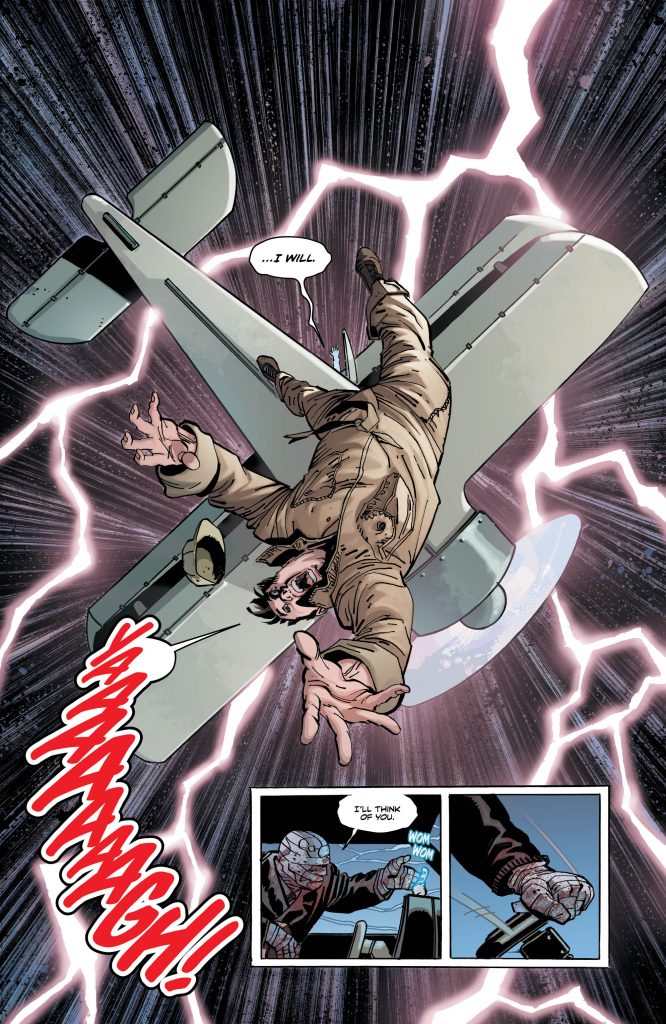 Some of the variant covers and alternate stories can be seen throughout the pages. There are glimpses into the different spectrums Snyder and Gillespie will be thinking up while Kubert brings them to life. Considering Kubert had to tackle everything from the edge of the world to a giant crab monster in this issue, he has more than proven himself to be the perfect artist to join this weird journey known as New Challengers #1.

The Challengers of the Unknown seem almost too old for this day and age. They are a team of scientific and paranormal investigators wearing matching costumes and traveling to distant worlds like some odd 1970s TV show. However, they could be exactly what a Top 2 publisher could need right now. The success of independent publishing isn’t just new characters, it’s new worlds. The stories that Image and IDW release can sometimes have more creative freedom or license than a series coming from DC or Marvel. But New Challengers #1 is looking to change that.

Scott Snyder and Aaron Gillespie have crafted a wonderfully fun adventure for readers. It may not be a great ride for the stars just having survived death. But sometimes great power requires great responsibility. Or it requires you being a heroic person who died recently. That’s who makes up this brand new team. Would-be heroes in a world that throws monsters and aliens at them every day. These are the people who stood up then; these are the people who are going to stand up now as a brand new team.

Kubert’s uniquely wild art style matches the crazy tone of the comic. Every panel or page is a surprise with the hilarious, ridiculous picture of an alien ship or a massive monster. But it’s supposed to look out of this world. A juxtaposition against the backdrop of our normal Universe. For a while now, Independent Publishers have been the only ones releasing stories that explore new worlds. Now, Scott Snyder, Aaron Gillespie and Andy Kubert have created a wonderful vehicle to explore new worlds of their own.

Come along for the ride!