DC Comics’ August 2018 Solicitations are here and there is quite a bit of new stuff to dive through. Probably the biggest piece of information is the announcement of a brand new Super Sons mini series. There’s also quite a bit of Brian Michael Bendis as he will bring his Scarlet series from ICON to DC Comics. Bendis will also be launching a brand new series called Pearl. There’s also a brand new Batman series called Batman: Kings of Fear. DC Comics will also be rolling out a bunch of Looney Tunes and DC Comics crossovers as well. Plus, we’ve got a whole bunch of new stories! Check them all out below!

The new Super Sons series will be called Adventures of the Super Sons and it will be written by Peter J. Tomasi with art work by Carlo Barberi and Art Thibert. The new series will be a 12-issue miniseries that will be written in flashback form to tell the lost and secret adventures of Damian Wayne and Jon Kent. Their first adventure will see them face off against an interstellar team called the Gang.

ADVENTURES OF THE SUPER SONS #1 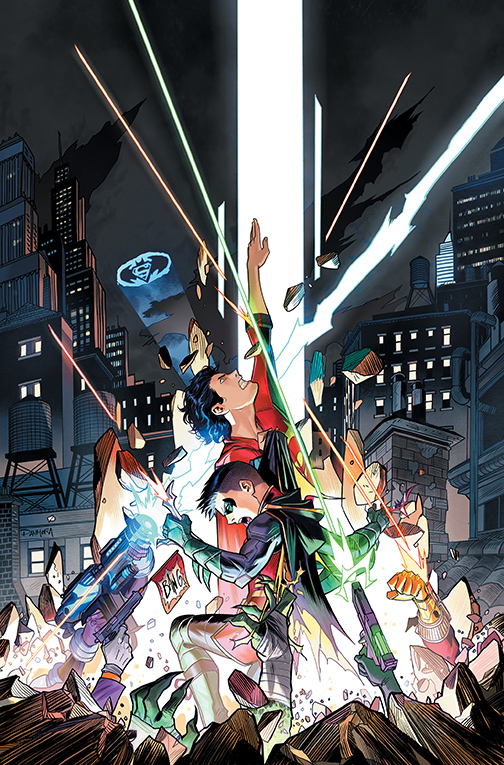 written by PETER J. TOMASI
art by CARLO BARBERI and ART THIBERT
cover by DAN MORA
variant cover by JORGE JIMENEZ
The Super Sons are back in an all-new 12-issue miniseries written by Peter J. Tomasi! Check out the lost and secret adventures of Damian Wayne (Robin) and Jon Kent (Superboy) in this flashback miniseries that takes a deep dive into the bombastic bromance between the sons of the DC Universe’s greatest heroes. It’s an epic dual storyline that transcends current events, as Superboy and Robin find themselves targets of an interstellar team of young badasses called the Gang.
ON SALE 08.01.18
$3.99 US | 32 PAGES
FC | 1 of 12 | RATED T
This issue will ship with two covers.
Please see the order form for details.
Includes a code for a free digital download of this issue.

Brian Michael Bendis and Alex Maleev will be bringing their Scarlet series over from Icon Comics and he will also be launching a brand new series called Pearl.

If you are unfamiliar with Scarlet, it tells the story of Scarlet whose life has been ripped apart by police corruption and when decides to fight back she sparks a brand new revolution. The original Icon series had a very Occupy Wall Street vibe with youths pushing their political goals through a variety of different tactics.

Here’s the solicitation for the new series: 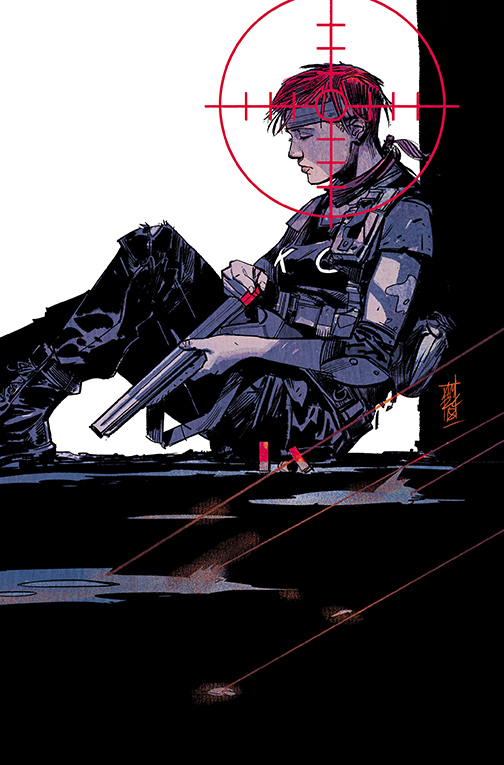 written by BRIAN MICHAEL BENDIS
art and cover by ALEX MALEEV
variant cover by MICHAEL GAYDOS
blank variant cover available
From the creative team that brought you Daredevil and Infamous Iron Man comes the latest explosive chapter in their creator-owned epic, which IGN called one of the best comics on the stands. SCARLET tells the story of a woman whose life has been ripped apart by police corruption. When she pushes back, she starts a chain reaction of events that will bring about the next American Revolution.
In this brand-new, new reader-friendly chapter, fully painted by Eisner Award-winning artist Alex Maleev, SCARLET tells the story of what happens when one young woman is pushed too far—and what one country will do to stop her.
ON SALE 08.29.18
$3.99 US | 32 PAGES
FC | 1 of 5
MATURE READERS
This issue will ship with three covers.
Please see the order form for details.
Includes a code for a free digital download of this issue.

Unlike Scarlet, Pearl is a brand new series from Bendis and Michael Gaydos. The story will be about a tattoo artist who also happens to be an assassin for the San Francisco Yakuza. Interestingly enough she dreams of another life and when she runs into her doppelgänger her dreams escalate. 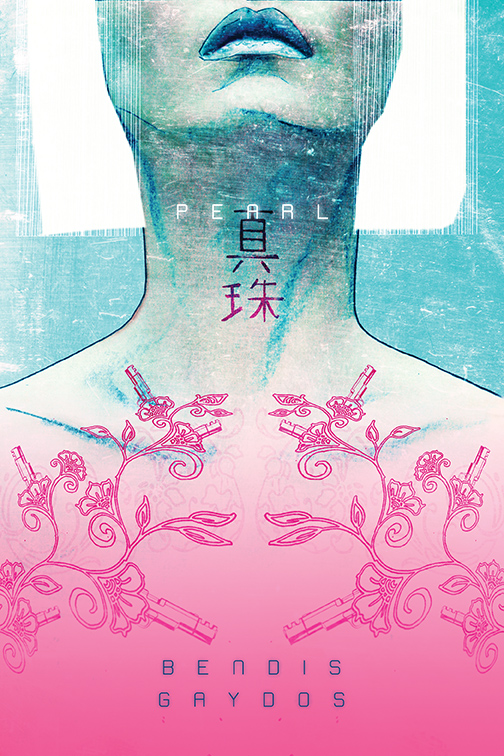 written by BRIAN MICHAEL BENDIS
art and cover by MICHAEL GAYDOS
variant cover by ALEX MALEEV
blank variant cover available
From the Peabody Award-winning creators of Jessica Jones comes a brand-new creation. PEARL is the story of an exceptional tattoo artist and accidental assassin for one of the modern-day San Francisco Yakuza.
She was born into one life, but another is calling to her. When Pearl accidentally meets one of her peers, her doppelgänger from another clan, she starts to dream of a better life. But Pearl has a very special ability that keeps pulling her back into the violent world she is desperate to escape.
PEARL is a major series launch from writer Brian Michael Bendis and artist Michael Gaydos that features their first brand-new original character since Jessica Jones. Fans of the Jessica Jones comic and TV show will be thrilled and delighted by this bold new direction the creative team has taken.
ON SALE 08.15.18
$3.99 US | 32 PAGES
FC | 1 of 6
MATURE READERS
This issue will ship with three covers.
Please see the order form for details.
Includes a code for a free digital download of this issue.

Another new series, Batman: Kings of Fear, comes from Scott Peterson and Kelley Jones. This series will see a veteran Batman begin to question his mission in Gotham City. At the same time Batman begins to doubt his own mission, Scarecrow will orchestrate a prison riot and give the Dark Knight one of the great challenges in his career. 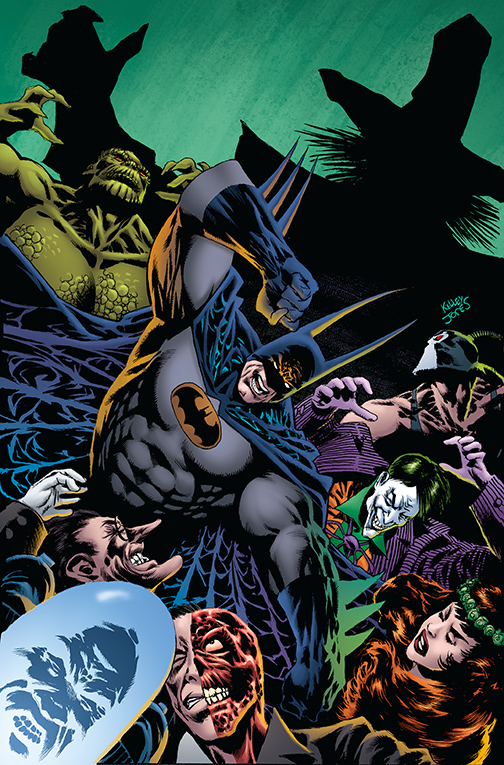 written by SCOTT PETERSON
art and cover by KELLEY JONES
variant cover by BILL SIENKIEWICZ
Legendary artist Kelley Jones makes his triumphant return to the Dark Knight in this explosive miniseries written by former BATMAN editor Scott Peterson! Batman’s been overseeing Gotham City for years now and isn’t sure how much of a difference he’s making. Doubt, fear and insecurity are starting to take over. And as all of those negative feelings set in the Scarecrow orchestrates a riot at Arkham Asylum to give the Dark Knight one of his greatest challenges yet! This six-issue miniseries will see the Scarecrow in a horrifying new way that you’ll have to read to believe.
ON SALE 08.22.18
$3.99 US | 32 PAGES
FC | 1 of 6
RATED T+
This issue will ship with two covers.
Please see the order form for details.

Those are the standout new series and launches from DC Comics in August. What are you looking forward to from DC?