Ta-Nehisi Coates’ new Black Panther series appears to jettison from current Marvel continuity into some time in the distant future. The opening page tells us about a colony of Wakandans that was dispatched two thousand years ago. That colony has now become an Intergalactic Empire spanning five galaxies. And then on the last page, it references that the names of the characters in this series “are taken from the legends of our past.” Those names are T’Challa, Nakia, and M’Baku.

The story is quite exhilarating and channels classic Star Wars. While, the new T’Challa isn’t a farm boy, he is a slave to this new Intergalactic Wakandan Empire. And he’s also not a neophyte combatant. He has experience in the martial arts as well as some pretty spot on reflexes and marksmanship. He shows off those skills in an attempt to free himself. Unfortunately, he doesn’t have any assistance and is eventually overwhelmed by his captors. 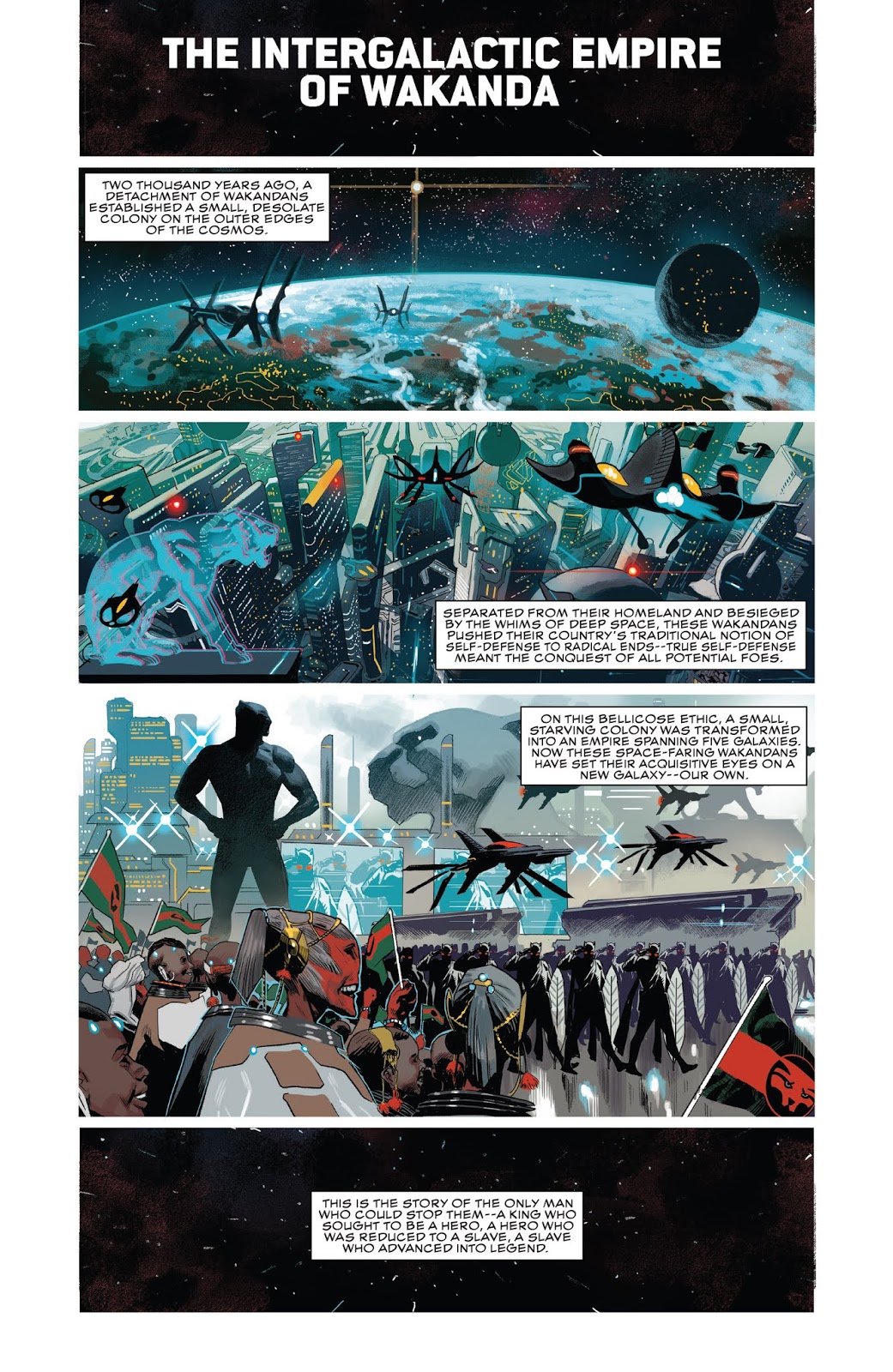 But what the book does have in common with Star Wars is that there is a group of rebels who are fighting with limited resources against a giant and far superior Intergalactic Empire. But that’s not the only thing the story has in common with Star Wars. There’s the sense of mystery and awe in the book as it moves along. It’s not exactly the same type of mystery and awe that you find in Star Wars. There aren’t any massive planet killing space stations as of yet. There aren’t any stand out personalities yet, and there isn’t the mystery of the Force. However, there is mind-wiping and there are fleeting moments of memories returning to the character. You want to know who the woman is in those memories. You want to know where this character comes from. But maybe the most important connection to classic Star Wars is you just want to discover more of the world that has been created here. You want to explore it. 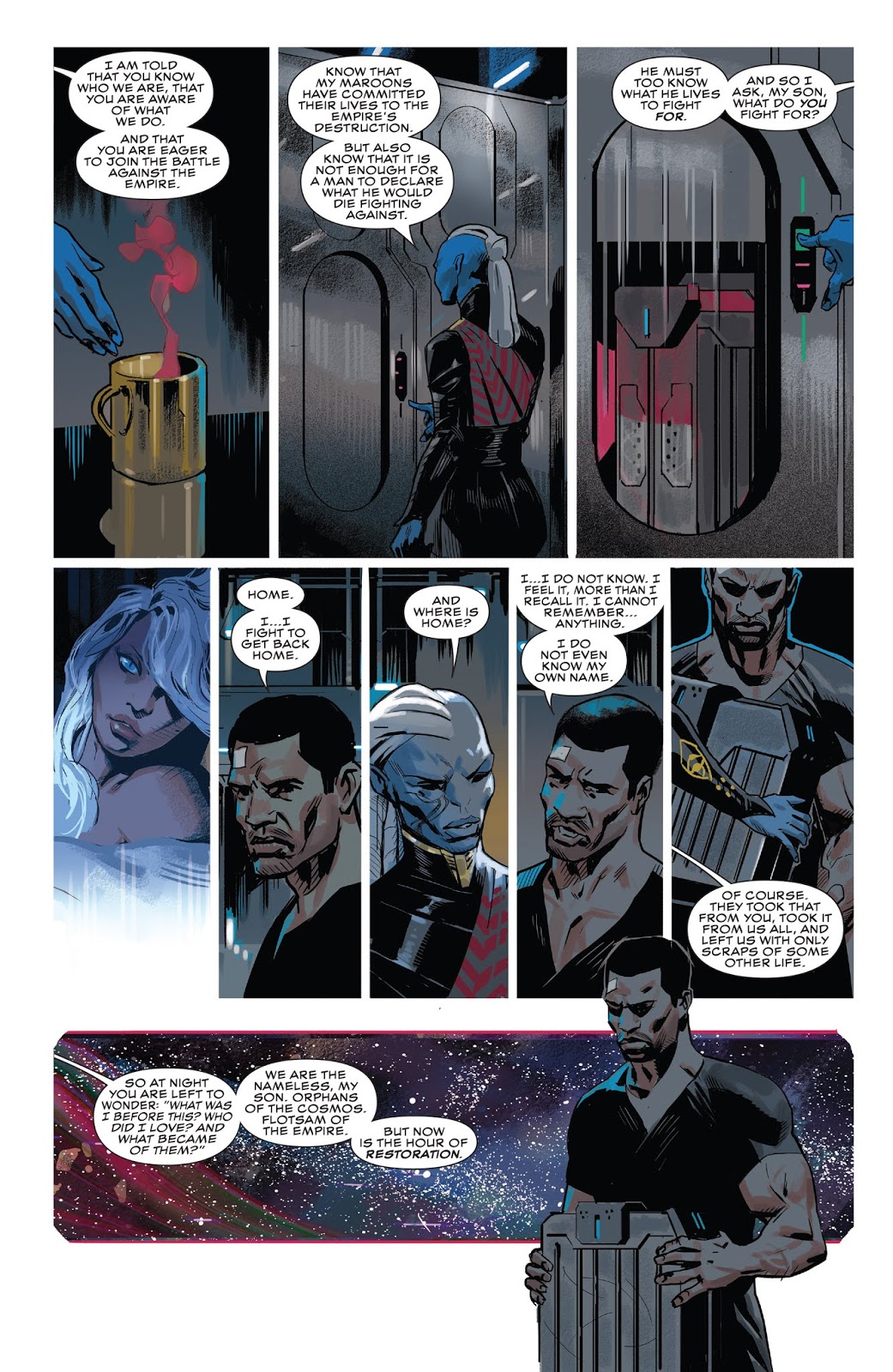 The book also introduces a small team much like in the original Star Wars. There appears to be a mentor-like character much as Obi-Wan Kenobi was to Luke Skywalker. You obviously have the primary protagonist in T’Challa like Luke Skywalker. There’s also two supporting characters as of right now in M’Baku and Nakia. Their characters aren’t fully fleshed out, but I wouldn’t be surprised to see Nakia fill the role of lover and for M’Baku to be a blunt, tough go. Obviously, they won’t directly mirror Star Wars, but you can already feel the chemistry among the team.

There’s also a number of different alien races. In a scene that feels very familiar to the original cantina scene, a big hulking alien attempts to put T’Challa in his place. Unlike Star Wars, T’Challa handles the encounter himself. The book also shows off the themes of forgiveness and redemption. Luke Skywalker forgave his father and hoped to redeem him and bring him back to the Light Side of the Force. T’Challa performs a similar task with this big brute who attempted to beat him up. He rescues him from the slavers and drags him to safety, showing he was willing to forgive him for his previous actions. 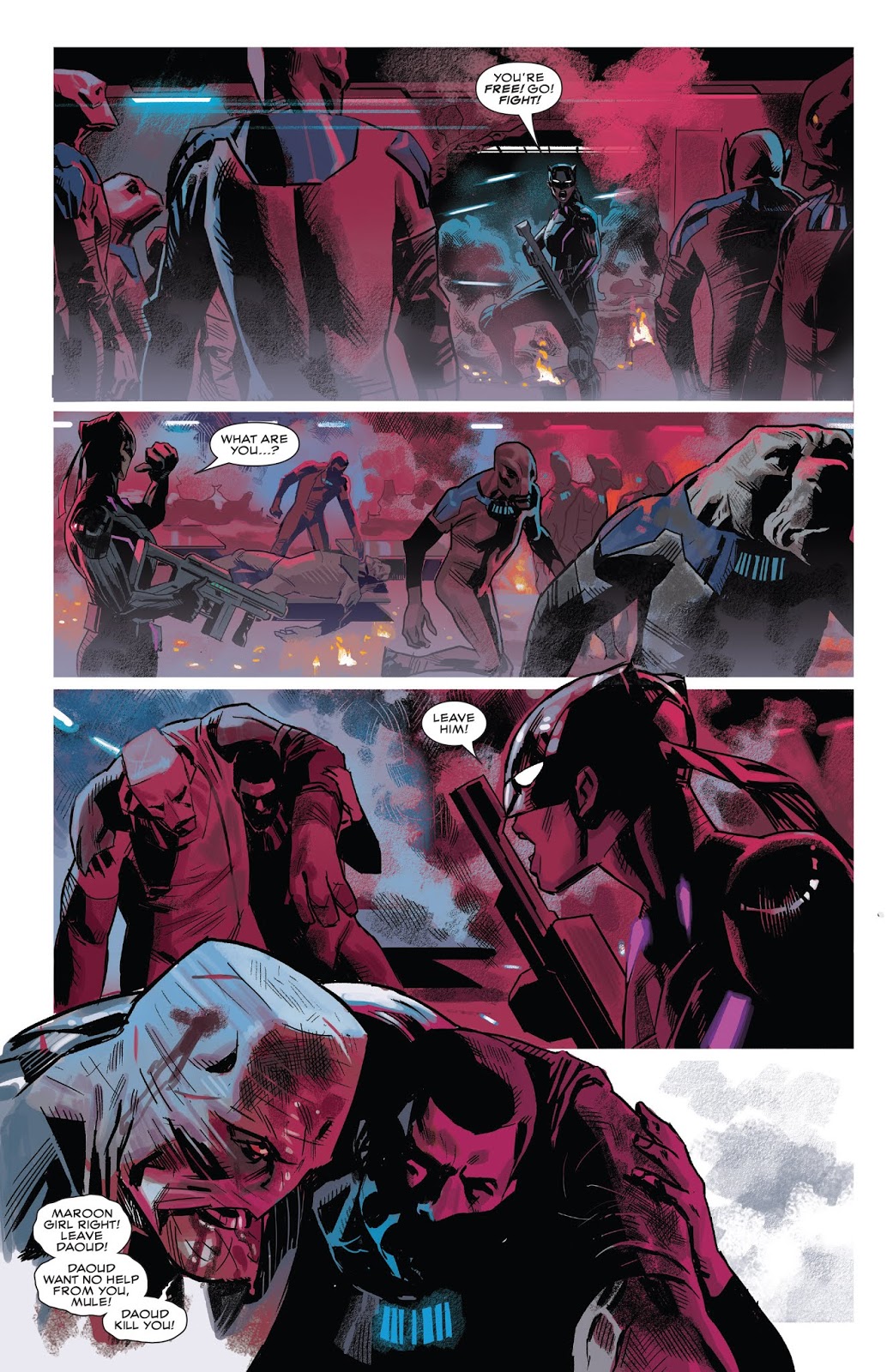 The new Black Panther book by Ta-Nehisi Coates and Daniel Acuña looks to be off on the right step, especially if it’s able to channel a cultural phenomenon like the classic Star Wars movies.