Revenge tales always have been, and always will be, popular story telling vehicles. Comic books, in particular, have quite a history of exploring this trope with some great measure of success. Wolverine chasing down the participants of the Weapon X program, Batman seeking justice for his parents, Punisher chasing down…. well, everybody; comic characters meting out justice for past wrongs done to them and others is no new hook. With the success of the genre so prevalent, it’s no surprise that that’s the well-worn path Image Comics’ new series Shanghai Red start us down in its first issue.

Things start out quickly and violently in this first issue. We’re given no real exposition to speak of, but what we do know is that there is a ship at sea with a shanghaied crew and it is time to release them back to their lives after their forced servitude. One of these unfortunate souls decides to take this opportunity to murder the entire crew (except the kidnapped ones) and take command of the ship. This all happens in the first few pages and it serves as a great hook to keep the pages turning. However, things take a downward turn from there. 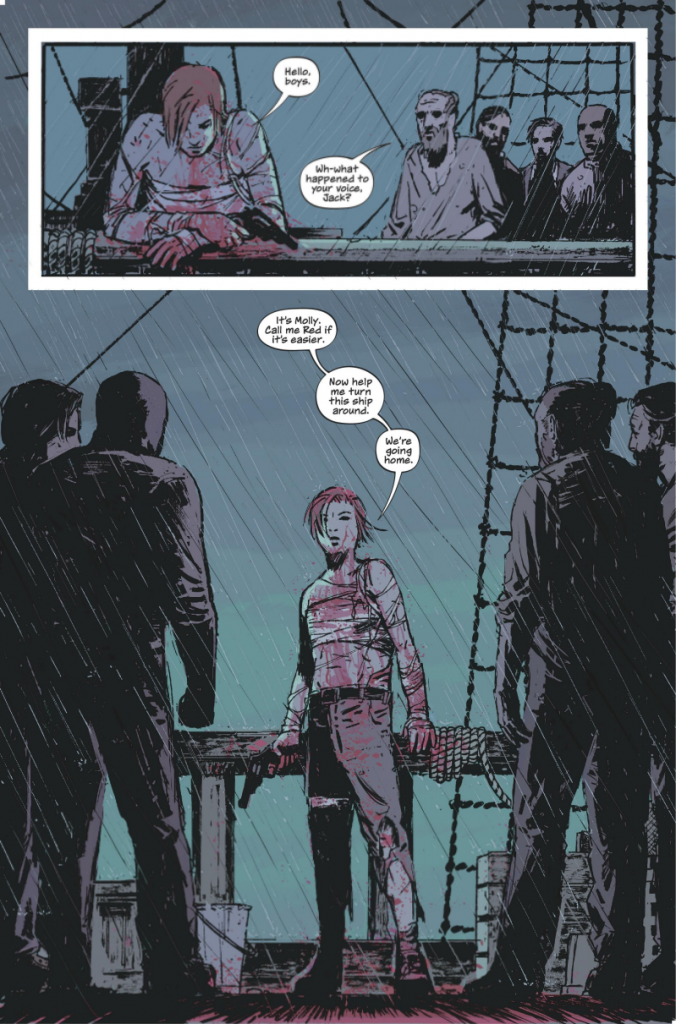 For one thing, it turns out that the ship-hand that murders the entire crew (a fellow by the name of Jack) is actually not a “fellow” at all, but rather a woman named Molly, or “Red,” as is her nickname. It’s not so unbelievable that a woman could overpower a bunch of men, but it is a stretch to imagine that a woman shared a ship with a group of men for two years and nobody ever noticed. Remember that scene in Pirates of the Caribbean: Dead Man’s Chest when Elizabeth dressed up like a man to sneak onto that ship, but she was still OBVIOUSLY a woman? Yeah, it’s like that.

Besides that bit (which, admittedly, may only bother me) the rest of the story just isn’t all that compelling. We’re given a little insight into Red’s past life and how she had to support her mother and sister after her father died and while that may help us to realize why she so desperately wants to get back home, it doesn’t make her any more entertaining a protagonist. The reason it’s so easy to root for people like Frank Castle in his quest for revenge is that he, himself, is a compelling character who engages the reader; not so for Red. Her quest is just and relatable, but she herself is such a dour wet blanket that the thought of reading multiple issues with her headlining it just isn’t very exciting.

That being said, her split personality does suggest some interesting potential. Whether consciously or not (we’re not told) Red turns into Jack when it’s convenient and it is seemingly this persona that allows her to murder and exact vengeance. What writer Christopher Sebela does with this is anyone’s guess, but Red’s fragile psyche and her propensity to see disturbing visions and retreat into her alternate personality is by far the most enjoyable aspect of this first issue. 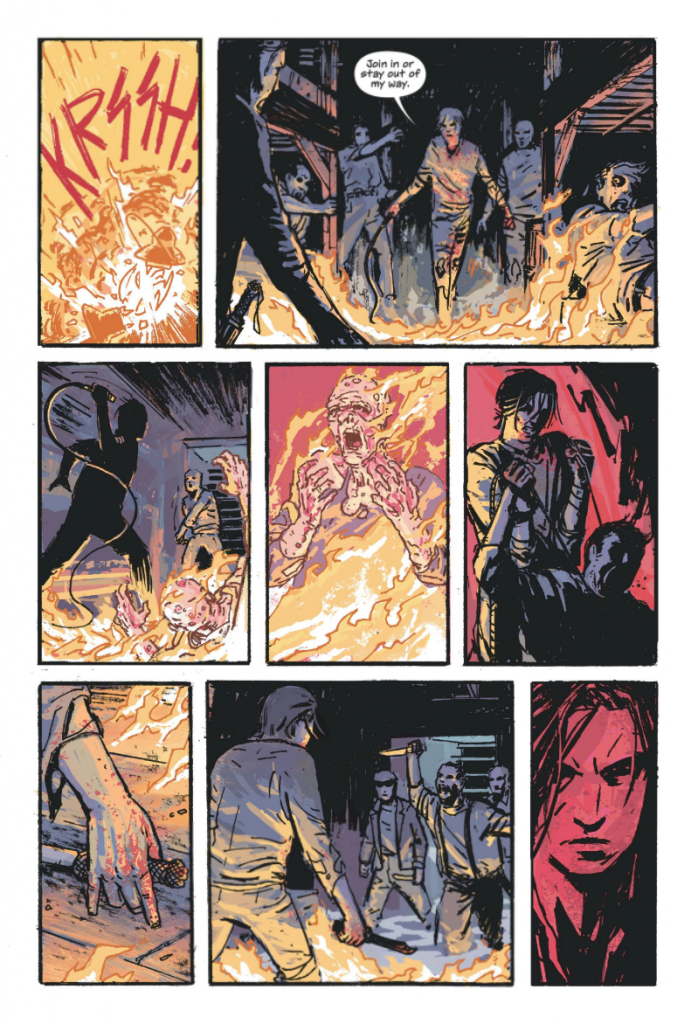 From an art standpoint, everything is above board. Artist Joshua Hixon does a fine job of translating the dark and brooding story to the page with his equally dark and sketchy art. Use of darkness and shadow is used to great effect with many of the characters and background ensconced in deep blacks. It’s not hyper-realistic, nor is it overly stylized, but it definitely does the trick nicely.

Special mention should be made for the coloring, which is easily a highlight of the issue. Most of the book is actually not overly saturated in colors, with blacks, blues and grays dominating most the panels in an effort to accentuate the idea of despair and anger the story hinges on. However, the color red is used to highlight certain scenes and in a manner that causes it to pop off the page. Red’s hair, blood, the sea itself, and other elements are rendered in red and against the dark backgrounds it is striking and aesthetically satisfying.

Also, I feel the need to mention that we are totally hosed on the sharks. The cover showcases a ship with several shark fins following close behind. I was super jazzed to see some sweet shark action in this story, but nope. All we get is one shot of a couple of fins. Don’t tease people when it comes to sharks, man. Just don’t do it.

The word that comes to mind when trying to surmise this first issue of Shanghai Red is “potential.” There is an awful lot of it in this issue, but it just doesn’t quite reach any of the heights that it clearly sets for itself. Revenge tales are always engaging when done right, but you have to be able to identify with and root for the protagonist and I don’t feel like this first issue did a very good job of bringing the readers to that point. That being said, there is a lot to be hopeful about here and now that Molly/Jack finally made their way to their hometown of Portland, perhaps subsequent issues will make good on what is, admittedly, an intriguing premise.