An alleged piece of concept art for the upcoming Avengers 4 film has been revealed by Hero X which gives us our first look at the new team line-up. 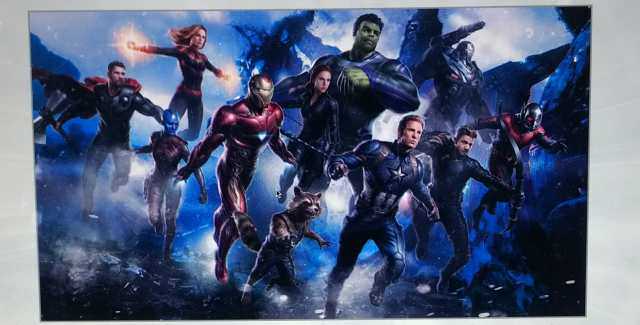 What stands out right off the bat is Clint Barton’s Hawkeye is present. However, he doesn’t appear to be in his Ronin costume, which set-photos have all but confirmed to show up in Avengers 4.

Other notable changes in the image are Captain Marvel’s costume. She’s in a red and a blue suit instead of the green and white seen in set photos from the upcoming Captain Marvel movie.

The Hulk has a brand new outfit. He’s wearing a full body suit for this film which could confirm the rumor that Bruce Banner and the Hulk will reconcile themselves and merge to form Professor Hulk.

Captain America’s costume is bright and shiny once again. It’s no longer torn up and faded. His star is white and he has the classic red and white stripes across his stomach.

Black Widow also has a new look. Her hair is back to the classic red we’ve come to know from the comics as well as previous Marvel Cinematic Universe (MCU) films.

War Machine also appears to have a very different suit. It’s much bulkier than before. It’s possible he might have gotten some upgrades in Wakanda following the battle with Thanos. Or maybe Rocket Raccoon got his hands on it and did some tinkering to improve the weaponry.

Characters who are missing include Letitia Wright’s Shuri and Evangeline Lilly’s The Wasp. We still don’t know if Shuri survived Thanos’ snap, but if she did it’s very interesting that she is missing. She could prove vital to the Avengers and equip them with improved Wakandan technology to better prepare them for facing down Thanos again. As for The Wasp, her absence in this piece of concept art backs up her previous statements about her role in the film.

She previously said, “I will appear in Avengers 4. Not very much, so don’t get your hopes up. Not going to be a ton. But I’m in there! And I’m proud to be in there, and I’m stoked to be in there.”

The popular theory is that The Wasp didn’t survive Thanos’ snap. However, it’s also possible that she might be on her own mission in the Quantum Realm or could be dealing with other situations on Earth. It would make perfect sense for a number of villains to emerge out of the chaos of Thanos’ snap and attempt to gain power. She might be needed to fight these potential new threats on Earth. Who knows, maybe villains like Helmut Zemo escape from their prisons after “The Snap.”