“Can you see it? Then if you can, turn the knob… and enter.”

The Justice League is the most important team in DC Comics. After new teams have been made, it’s time to set things right with the one that started it all. Scott Snyder has taken every new series he’s written to a whole new level of excitement and entertainment. Be it horror or superhero, he infuses intelligent and complex narratives to bring out the best and worst in his characters. However, the man likes to have some fun. That becomes the clear and obvious intention in the first few pages of Justice League #1. Don’t call it a comeback, because the team never truly left. But Scott Snyder is bringing them back to comic greatness with a classic touch.

Along for the ride is Jim Cheung, though this is one of his first few projects for DC he’s already showing the talent of a veteran. With a style remarkably similar to that of John Romita Jr., anything from intense and epic scale action to small character work and expressions looks phenomenal.

It’s exciting for someone to  craft action and display emotions so easily. Something that should be required for a Justice League comic. Martian Manhunter is now not only at the table, but at the head of it. He’s able to see into the minds of his peers and it’s an incredibly useful talent that allows for plenty of Comedy within the group’s chemistry. Snyder’s work has never been particularly funny, though his Batman always smirks once or twice a comic. But who knew he’d be able to write one of the funniest Flashes in years? The quips are quick and witty, enough to make every page float by with fun humor and an exciting story.

“Yeah, Clark’s Batman is so the best.”

Mystery at its finest. But the very beginning of his career Scott Snyder was a horror writer.  American Vampire is an incredible story that spans hundreds of years and tells the tale of many vampires and many characters. It’s all centered around the theme and idea of vampiric activity within the United States. A simple premise that turned into years and years of promising stories that hopefully haven’t ended.

That should be proof alone that Justice League is going to be a fun ride for a very long time. Snyder has promised this to be his most ambitious work and it already shows. Within the first few pages the reader will watch a horrific and prophetic meteor of sorts flying through the ages of the DC Universe. It shows us a future and past we both know and don’t know. The comic is somehow the perfect debut and yet feels like a prologue. It has begun and yet it feels like the surface has barely been scratched.. Martian Manhunter can sense what’s wrong, but little did he know… 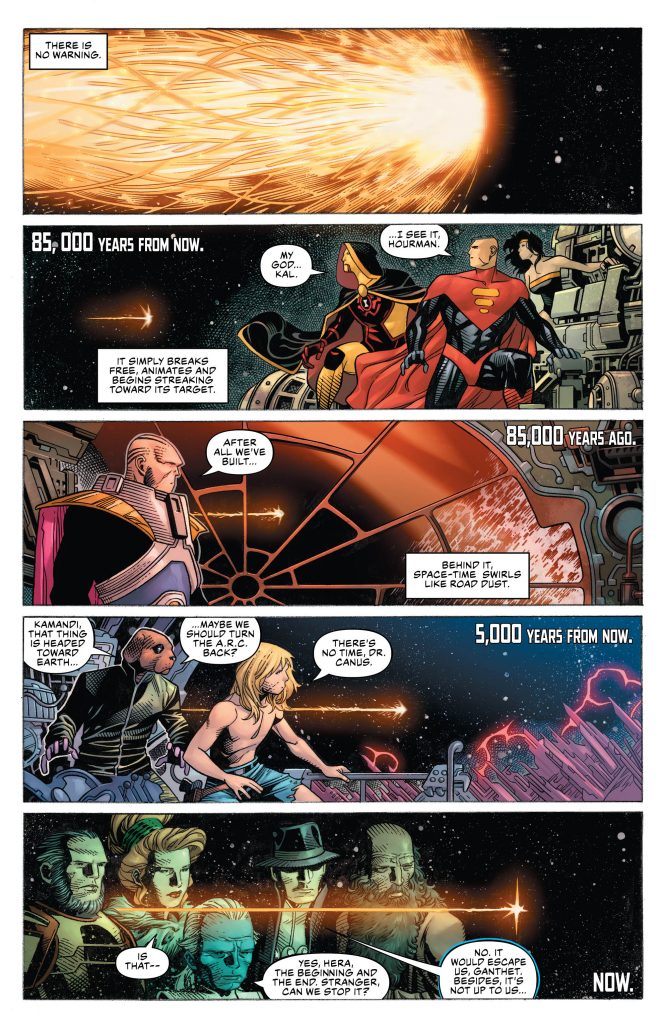 In the pages of Justice League: No Justice it was implied that Lex Luthor is still a hero. Well, hold on to that memory. Because the Legion of Doom has returned. The evolution of the League as Martian Manhunter takes his rightful place is just as fun to watch as the growing Legion of Doom. Snyder knows the best heroes demand the best villains, so he’s making the smart choice and throwing them all in one story together. By giving the readers a thorough update on the current condition of their favorite teams, good and evil, he’s made the perfect example of how to stir plenty of excitement for the future of the Justice League series.

Jim Cheung looks like he’s been drawing the Justice League for most of his life. The team has never looked better, broader, more colorful, or more powerful. Every character’s design looks perfectly rendered and modern, making this a picture perfect version of the Justice League. Snyder didn’t make Cheung’s first issue easy, everything from the panel work to the team formations is intricate and complex. Every page is a gorgeous display that looks thoroughly planned out by some of the best artists working in the industry. And that’s exactly what it is. 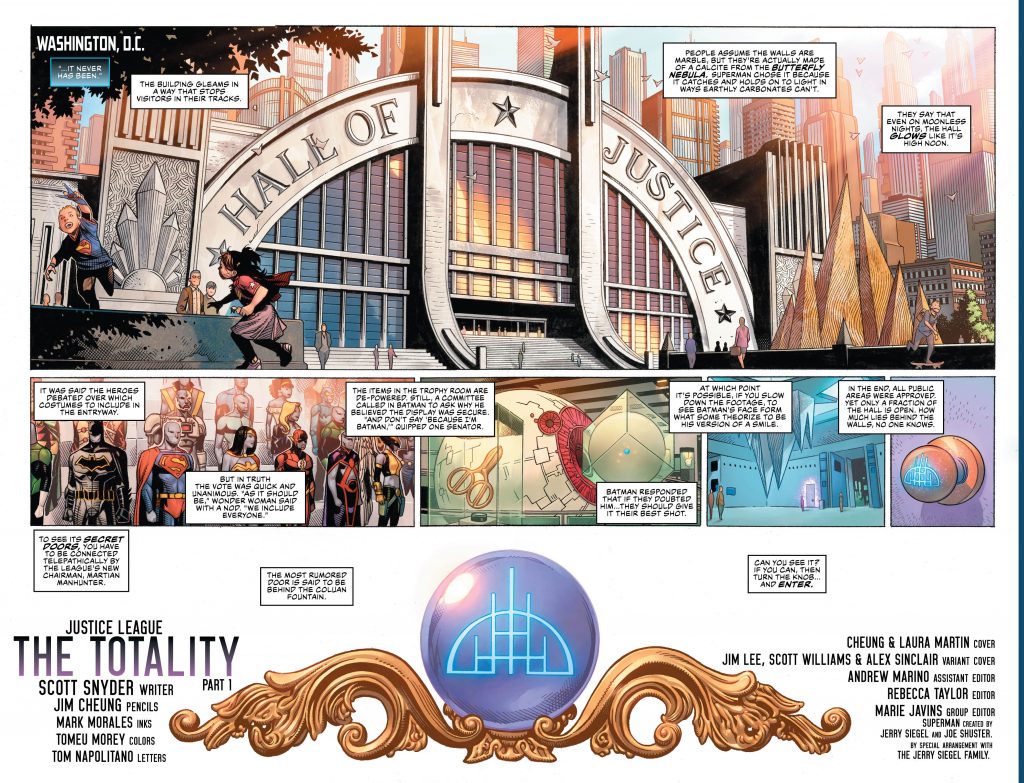 Cheung’s work is inked by DC veteran Brad Morales and one of the best DC colorists, Tomeu Morey. Be it an armored Batman or a meditating Martian Manhunter, this art team knows how to bring Snyder’s fantastic ideas to life. It will be interesting to see how the work of other Justice League artists blends with that of Cheung’s, but he’s set an unbelievably high standard with Justice League #1.

Cheung gives a brief glimpse of the future in something resembling a preview page. Revealing a few portraits, silhouetted so as to keep their identities hidden. It’s a fun trick to let fans know that it’s a long road ahead, but Justice League #1 is a fantastic start.

The chemistry is spot-on, his story is exciting and fresh. Like the pages of Justice League: No Justice, snakes don’t really feel world ending. There’s no attempt at modern realism or horrifying violence, it’s just about fun. This is about reminding you of the Justice League you had when you were a kid. Watching them have fun together, making fun of each other, saving the world together. There’s literally nothing better for a DC fan and Scott Snyder knows it.

The writer had us fooled all along. Batman will always be his formative work at DC Comics, but the first pages of Justice League feel like something else. Like the kind of story and feeling you never want to end. The kind of series you’ll be asking to return to years later. It’s only just the beginning, but unfortunately we’re already one step closer to the end of what is clearly going to be an incredible comic series. Justice League #1 doesn’t take the team anywhere new, it takes them right where they belong.