“No one can get too close, even if I want them to.”

When  looking over the new comic book releases today, expect The Unexpected #1. Sorry, had to be done. DC has been trying quite a few new things lately. Adding new heroes, creating new teams. There’s no avenue that isn’t being explored. Enter, The Unexpected. A team of magical misfits trying to stop the end of the world. But wait, what of The Terrifics? Are they saving the world? Never mind that’s The Immortal Men. They’re the ones saving the world. It feels like there’s quite a few team books delving into the magical side of DC right now because there are. It’s becoming  difficult for these titles to separate themselves from the pack, since quite a few of them are pretty good.

The Unexpected is a solid debut. It features great art from Ryan Sook and Cary Nord. However, there are about three or four books from the same publisher doing pretty much the same thing right now. None of those series are being written by Steve Orlando, but still. Recently revitalized Firebrand serves as the confused protagonist for the book. Thrown into a story older than she is. The story treads territory similar to that of both the New Challengers and the previously-mentioned Immortal Men.

The New Age of Heroes might be getting a little crowded. The Unexpected #1 has some genuinely interesting ideas, powers, and characters. But placed in a bloated comic book world with plenty of teams running around mysterious dimensions, is The Unexpected #1 that necessary?

“No one here knows my fighting name.”

Steve Orlando is fantastic in pretty much every way, shape, or form. His dialogue is hilarious, his characters have thoughtful arcs,  and he throws the perfect into everything.. Every hero or villain is a three-dimensional character with a back story and history. Even if a hero spends only a few seconds in a story, they feel real. There’s no other way to put it. But is that enough to make The Unexpected #1 a unique comic? That’s a difficult question to answer. In this issue, Orlando creates plenty of unique characters that have their own set of powers. The team is an outcast of weirdos that teleport back and forth between different dimensions fighting off evil forces not everyone understands. It’s interesting, right? The problem is that is pretty much the same premise of the Immortal Men. 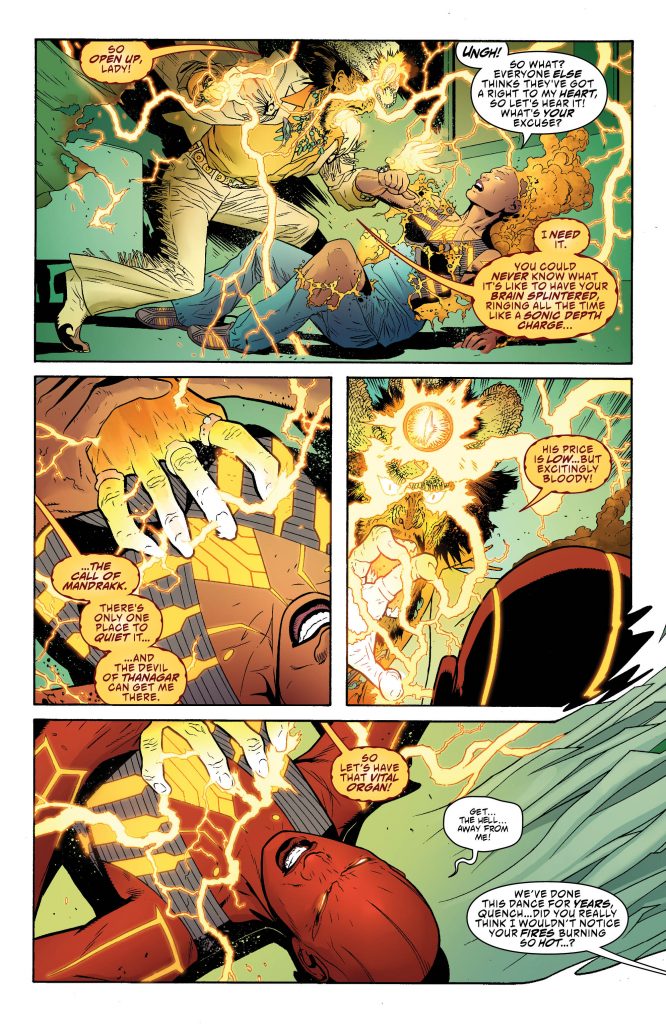 It’s also a similar premise to the mysterious energy surrounding The Terrifics. The same type of story can getting a little tired. Quench and Neon stand out as two alluring Personalities in the world of The Unexpected. Yet they might not be around for as long as we hope. Hopefully, some surprises are in order down the line. Because, The Unexpected #1 was shockingly familiar.

Ryan Sook and Cary Nord create a weird world and populate it with a strange set of characters. Luckily they’re two of the best artists for the job. Their styles don’t blend seamlessly, but that doesn’t matter. Every page is comic bliss illuminated by some mystical force or magical power that the eyes could spend many moments lingering over.  One particular character does resemble Big Barda, but otherwise these are some of the most intricately designed characters on comic shelves. 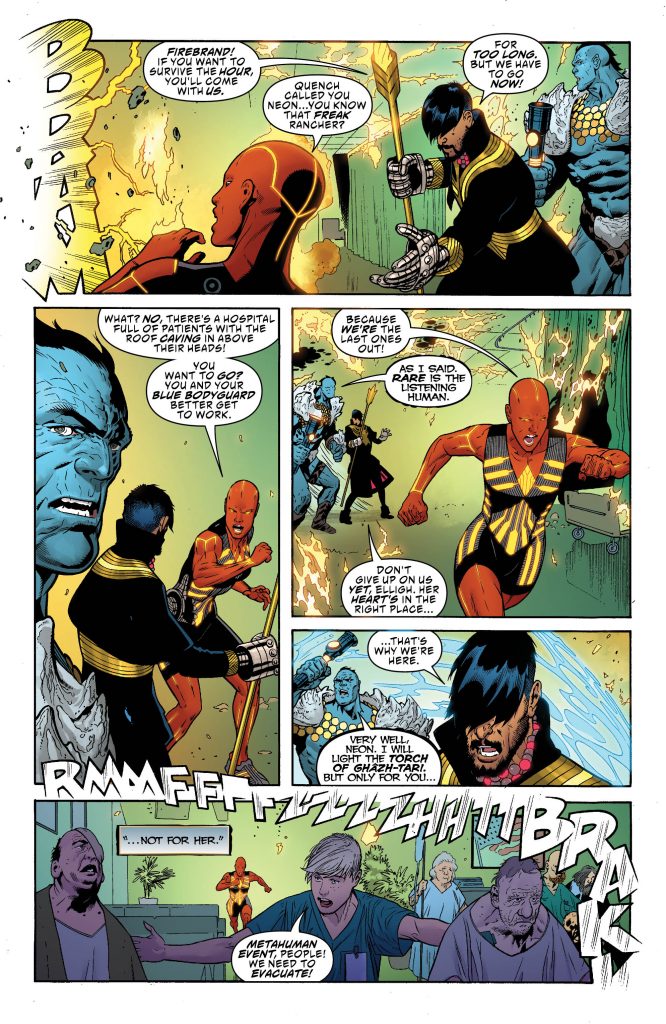 The characters are made even more captivating by the colors of FCO Plascencia. In the way that Jordie Bellaire is able to perfectly capture dark and dreary, Plascencia has a patent on light and magic.  DC has clearly been making a point to hire the best artists in the business. The Unexpected #1 may have an issue making the story unique, but every page is comic beauty worthy of praise.

The comic shelves are pretty competitive these days. If you want magic, superheroes, multiple dimensions, and crazy character designs you can find it easily. That’s a problem for The Unexpected #1. Because other than those details, which are surprisingly common these days, there’s not much else that makes it unique. Steve Orlando’s writing is always a pleasure to read, but this is from a conceptual level. DC has plenty of team books right now, especially ones delving into the mystical and magical. The Unexpected #1 needs to do a lot more to stand-out and in with the art of Ryan Sook and Cary Nord it definitely has a leg up.

The two artists use every inch and panel of The Unexpected #1 to create a beautiful new world. One that takes advantage of the fantastical story that Orlando has displayed. Though the tone and narrative may seem familiar, the designs and colors won’t. Hopefully, this art team can remain intact. Maintaining an art team has become one of the more difficult tasks of any book these days. But as the art is the most charming part of The Unexpected #1, it’s more vital to keep the team together. Orlando has plenty of interesting elements to get this story headed in the right direction. The Unexpected just needs to find its own voice to prove its worth.