Comics books have gone out of their way, especially the past few years, to be as inclusive as possible. New characters are popping up all the time who represent people from all walks of life, nationality, color, etc. If you can think of a personality trait or lifestyle preference, it’s probably represented on the page in one book or another. Unfortunately, more often than not, a writer’s desire to be “progressive” leads to a sacrifice in story and the characters becoming sadly one-note, insufferable, or depressingly unrealistic. Alterna Comics new mini-series, Metaphase, sidesteps this pothole and highlights a young boy named Ollie who suffers from down-syndrome and fortunately for all of us, writer Chip Reece has created an enjoyable character in a sweet, if not perfect, story. 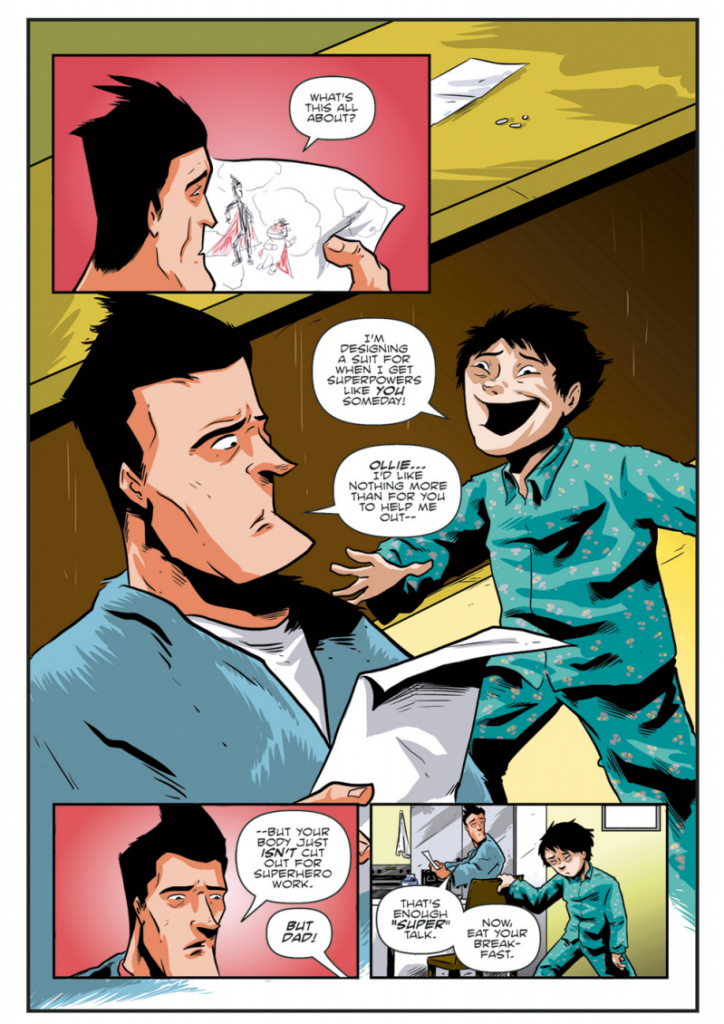 Ollie lives in a world of super heroes and super villains. In fact, his father is a famous hero with Superman like abilities. All Ollie wants is to be a super hero like his dad, but of course, his dad doesn’t want his son in harm’s way. Enter a new corporation that promises to give regular every-day people the super powers of their dreams. The first issue of Metaphase ends before we can find out what the corporation’s ultimate goals are, but we’re given enough insight to see that they are, in fact, a nefarious bunch of people. It’s a simple story told in a charming way with only a few hang ups here and there.

Ollie himself is a great protagonist. He has down-syndrome, yes, but that is not what defines him. He is a creative, joyful, regular little boy who runs around the house with a towel wrapped around his neck. He’s a refreshing character to spend time with, especially nowadays in a comic landscape wherein we are up to our necks in characters whose sexual preference, minority status, race, etc. seem to be their one and only defining characteristic. The only problem with Ollie as a character is that we do not get near enough time with him. He’s prevalent on the first few pages, but after that the book is dominated by his superhero father and the colorful cast of villains.  Ollie is obviously the centerpiece of the book, so it’s a shame that we only get a miniscule amount of time with him in the first issue. 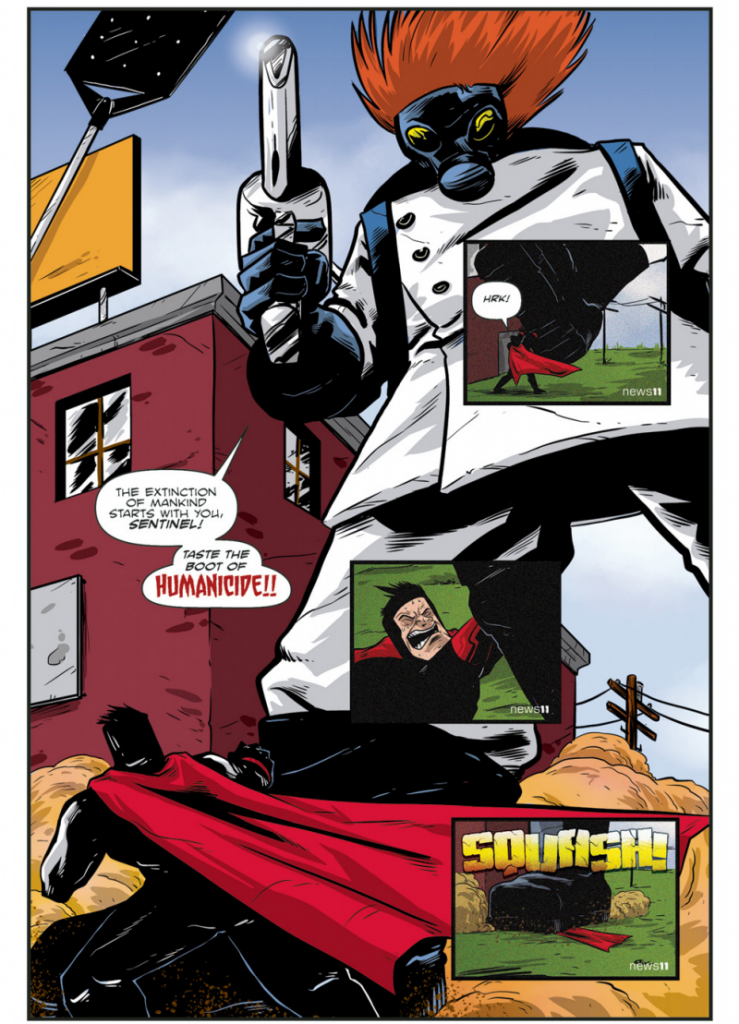 On the plus side, Metaphase’s other characters are all fun and engaging in their own right. Ollie’s super hero father, The Sentinel, is a well-meaning super-powered individual who is just as concerned with raising his son right as he is keeping the peace and saving the city. The super-villain, Humanicide, is also great fun. He’s the correct parts silly and threatening and he fits the lighthearted tone of the book perfectly. Their fight down town even results in some Batman vs Superman style questioning of the super heroes’ responsibility in the destruction of the city when they’re fighting on our behalf.

All in all, it’s a quick, but optimistic read. While I generally enjoyed it, I do have a few concerns. Besides the aforementioned lack of page time with Ollie himself, I also found the plot point of Ollie’s father downplaying Ollie’s desire to be a super hero to be a bit played out. Adults telling kids that they’re too young or not skilled enough to do something, only to have them do it anyway and prove their parents wrong is a path that’s so well worn you could fall into the ruts and break your legs. It’s not a huge criticism, and it’s not a huge plot point, but it just seemed a bit like the same family movie plot that we’ve seen a hundred times over.

I also worry just a little at the reader’s ability to really connect with the characters before the story wraps up. The first issue of Metaphase promises to be the first of a two-issue series. If we’re truly halfway done with our time in this universe, I can’t help but be worried. We didn’t really get to know anyone particularly well and one more issue doesn’t seem to be enough to cover all the bases. However, the fact that I’m lamenting not getting to spend more time with these characters in a testament to the strength of the writing. 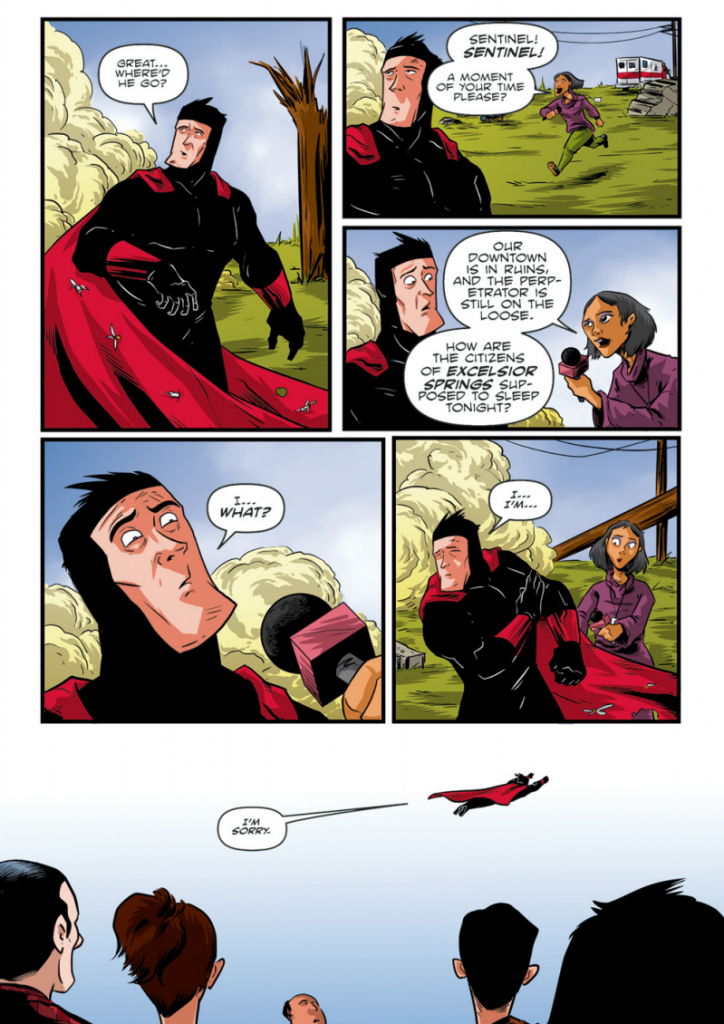 Artwork is also good, if not spectacular. Artist Kelly Williams deftly creates a sense of wonder and whimsy in a look that wouldn’t look out of place on Nickelodeon back in the 90’s. Think something like Rugrats. It’s not an art style I’d like to see in every book, but here, it works very well.

Metaphase is a comic book that has its heart firmly in the right place. It’s very refreshing to read about a character who, while having a particular handicap, is not defined by it. The entire story is a fun, breezy trip through a family-friendly universe and the only real downfalls is that there is just not enough of it to do the characters justice.