Prolific comic book writer Chuck Dixon, who co-created the Batman villain Bane and had lengthy runs writing the Punisher and Conan at Marvel Comics, hopes to bring back Jungle Comics in a brand new IndieGoGo.

Dixon will be teaming up with artist Kelsey Shannon for Jungle Comics #1 which will be part of Antarctic Press’ new Superverse line. If you hadn’t heard of the Superverse line, neither had we. Fortunately, Chuck Dixon explained it to us.

“Ben and Joe and the gang [from Antartcic Press] are raiding the vast (and I mean VAST) library of forgotten superguys and gals from the past to build a brand new continuity. AP has a great track record for creating fun comics and this might just be their most ambitious effort. I’m glad they’re trusting me with a tiny corner of their universe.”

Jungle Comics is set in the depths of a steamy jungle where death lurks around every corner, but more importantly the book promises it will take us to a place “where men were men and women were HOT!” 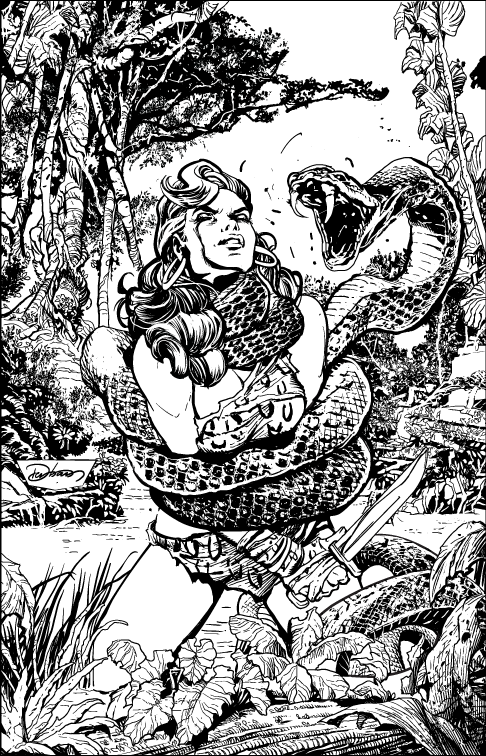 Dixon is excited about the project:

“This project has been in my mind for awhile, an all-in jungle adventure like the kind I loved as a kid. What we’re doing here is taking all the best parts of a cliffhanger adventure and putting them in an action-packed story that turns the genre on the head. EVERYTHING you’d want in a feral jungle fantasy in a way you never expected to see it! Kelsey is providing amazing art for this series and Antarctic is bringing their expertise to make this one of the most attractive comics projects you’ll see this year!”

We reached out to Chuck Dixon to get some more details about the project specifically what it’s going to be about and who is going to star in it! As to what we can expect, a number of the images on the IndieGoGo show the characters battling with the wildlife. While Dixon didn’t want to give anything away he hints there is more to the story than that.

“I don’t want to give away any surprises but all bets are off and sky is the limit as far as genre tropes we’ll be bringing in here. But, trust me, It’s not going to be a hundred pages of near-naked guys wrestling wildebeests. My apologies to anyone who’s into that.”

“All of the wild jungle action, forgotten cities and lost safaris you’re looking for in a story like this. But all presented in a way you wouldn’t expect. The end of the first issue is a shocker and, at the same time, funny as hell.”

As far as exactly who will be starring in the series. Dixon told us it will be public domain characters from the Golden Age of comics with most of them from Fox and Fiction House. The characters include Ka’an’ga and his pal Ann as well as Ruhle the Jungle Goddess and Jo-Jo.

Dixon was blunt when describing these characters, “All of these characters were, let’s face it, Tarzan knock-offs. But I’m working hard to build deeper characterizations for them to help hem rise above wannabe status.” 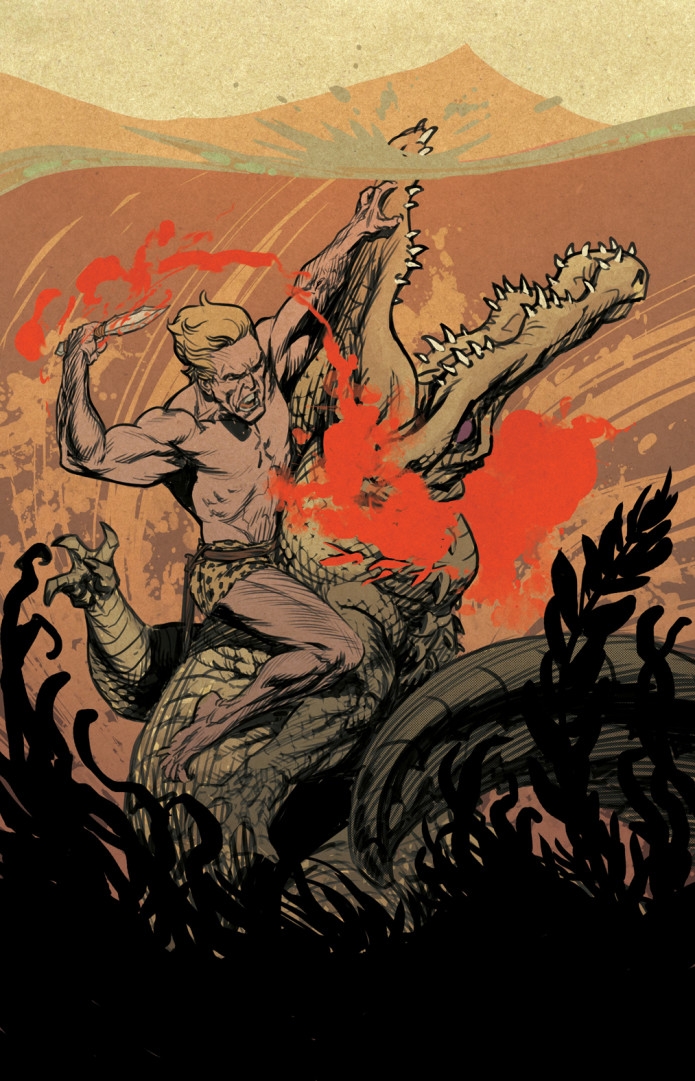 He also informed us there will be original characters joining the mix. However, he was clear about the public domain characters and how they would be used.

“I’ll be keeping all the basics of the characters in place but having fun with how they’re portrayed. This won’t be a parody of of the old jungle comics stories but we will be lookingback at these stories with a few affectionate jabs at the genre. Some of the characters will meet to team up to face a common threat.”

As to his partner in crime on this venture, Kelsey Shannon, Chuck had nothing but praise.

“His stuff is amazing. I’ve only seen a few pages and I’m blown away. Kelsey has gotten right into the spirit of this thing. And it’s not an easy genre to put across. All those animals and foliage! But he’s blowing it up and I’m very pleased. This has been a longtime dream project for me and I’m thrilled to have someone of Kelsey’s talent brought to bear on it!”

There are a number of pretty good perks for the IndieGoGo campaign.

$10 gets you a printed version with a cover by Kelsey Shannon. You also get the PDF. You can also chose to get a cover by Brian Denham.

$20 gets you a signed cop of Jungle Comics #1 by Chuck Dixon with your choice of the Denham or Shannon cover.

$40 gets you a signed copy of Jungle Comics #1 by Chuck Dixon and Kelsey Shannon with your choice of the Shannon or Denham cover.