Vampirella has been around for a long time now. I suppose it’s the fact that she’s a vampire that accounts for her still looking young and being able to wear that strappy red thing she always wears. Throughout all these years she has had some thrilling adventures and battled some amazingly powerful creatures. Perhaps it’s the epic quality of some of her past escapades that makes the first issue of her new adventure, Vampirella: Roses for the Dead, seem rather lackluster and unfortunately, a bit too pedestrian.

Vampirella is on the hunt again. This time though, she’s not after Dracula, inter-dimensional demons, zombie queens, or the like. This time she has her fangs set out for…. some dude. Now, he is an abusive sexual predator who deserves to have his blood drained dry by some winged creature of the night, but the fact that he’s just some deviant criminal makes Vampirella’s extreme power set seem a little wasted on him.

Or rather, that would be the case if her vampiric powers were of any real use to her here. At one point she mentions that she’s been tracking this guy for months. MONTHS! If an all-powerful vampire can spend months hunting a mere mortal, and still let him continually slip away from her, then I don’t think that vampire’s vicious reputation is really all that deserved. Maybe they really are useless sad-sacks like on Twilight. Shudder…. This problem is compounded by the fact that there is also a witch named Evily who has also been after this guy. Apparently one of his surviving victims is a good friend of hers and she’s looking for vengeance. So, to recap: we have a magic wielding witch and a powerful, immortal vampire hunting a regular guy and he constantly evades them by quickly running down alley ways. Alright then.

On the plus side, for people who are unfamiliar with Vampirella, this first issue of the new series is a decent jumping on point, even if it is a little unspectacular. Care has been taken to introduce Vampirella to new readers by giving a quick summary of her origins and a rundown of her powers and weaknesses, or lack thereof. It’s done quickly and unobtrusively in a way that gives newcomers all the info they might need without boring longtime fans who have been following Vampirella’s exploit for years.

The artwork here is good, if nothing spectacular. Characters are drawn well and environments are pleasantly detailed, but there really isn’t anything here that will make you wish you could hang these panels on your wall. It’s decent and competent enough to get the job done without really wowing anybody, which is a bit unfortunate as some vibrant, outstanding artwork could have helped to offset some of the more “blah” aspects of the unremarkable story. 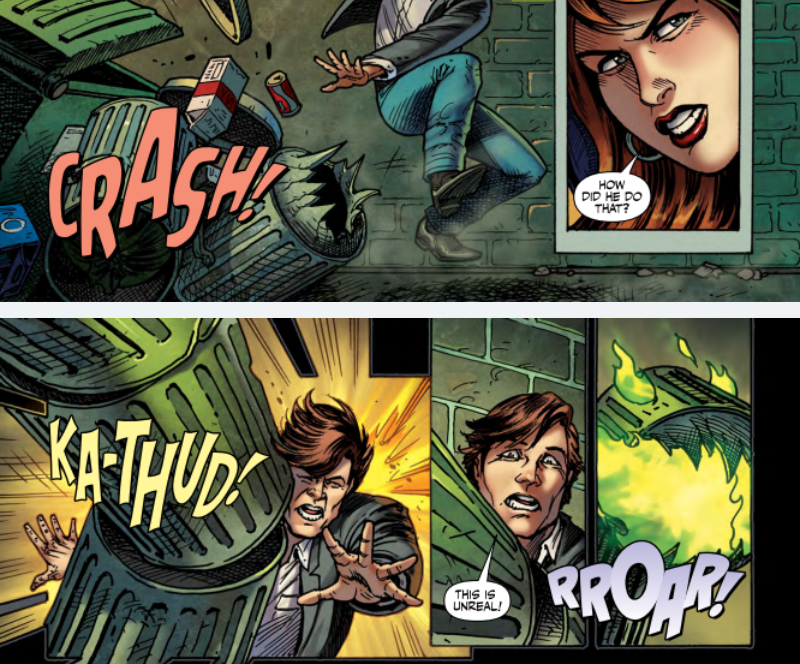 Now, I’m not saying to throw in the towel on this new series just yet. This is just the first issue and things could ratchet up in subsequent issues, but for me, things did not get started out on an extremely high note. That’s not to say it won’t, though. I’m certain there’s plenty more layers to uncover here and if Vampirella has proven anything over the years, it’s that she has staying power.

Not a terrible first issue, but certainly not great either. It has the unfortunate distinction of hovering right there in the “OK” region of comics that run the risk of being forgotten too quickly. I hope that in subsequent issues Vampirella’s stable of supernatural powers find a way of benefiting her more than they did in this issue and that she’s able to tangle with a threat bigger and more substantial than something the NYPD could probably just deal with.