Good’s comments began as typical trolling. He seemed to be relishing in the attention he was gaining and claimed that it was increasing his reach. However, he wrongfully insinuated that Ethan Van Sciver, Diversity & Comics, and their fans are part of the alt-right.

Love making the Alt-Right trolls dance. They can’t help themselves; they’re idiots. They don’t realize that the more they respond, the more they retweet and tag, the bigger my reach grows. @EthanVanSciver and @DiversityAndCmx goons are the best PR free can buy!!!!! HAHAHAHAHAHAHA

It quickly turned a dark corner when he began attacking Van Sciver and Diversity & Comics. 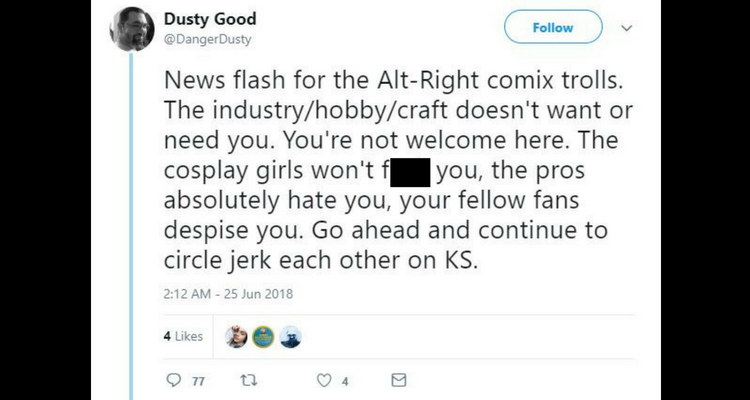 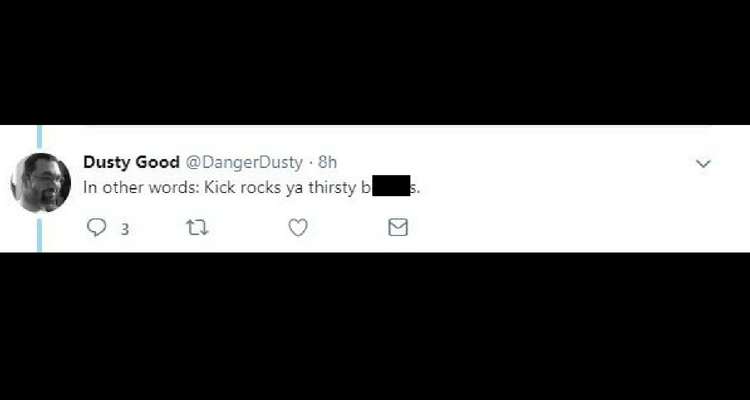 He would then insinuate that the two of them are being funded by the Ku Klux Klan associating them and attempting to label them as white supremacists.

Quick! Someone check if David Duke’s grandkids are holding issues of Jawbreakers or Cyber Frog!

Fellow comic book outlet, Bleeding Fool, would call out Dusty Good for his behavior and then ask if this is how Comic Crusaders conducts business with their freelancers.

Completely unprovoked, ad hominem attacks on a respected and successful comic creator is what we’ve come to expect from #SJWs like ComicCrusaders.

Here’s one degenerate jumping into @EthanVanSciver’s mentions in order to drag him and his fans. Obscene and immature, what’s new? pic.twitter.com/63Fkqz1RBb

Wow. Is this how @ComicCrusaders conduct themselves when engaging with #comics creators they disagree with politically?

Our BF writers would be reprimanded for these sort of disgusting attacks, and we regularly clap back on creators, but this is ugly. #GateKeepers #Triggered pic.twitter.com/P2griRenYo

Good would claim he was issued an ultimatum to either apologize to Ethan Van Sciver and Diversity & Comics or be released as a freelancer.

I was issued an ultimatum by @ComicCrusaders either I issue an apology to @EthanVanSciver and @DiversityAndCmx for my comments or be released from the website.

He would go on to apologize to the fans of Comic Crusaders.

I’m willing to put my nuts on the chopping block for what I believe. Can you say the same?

However, he would quickly double down on his attacks by stating he was interested in melting a mic against the “Alt-Right comic fans.”

Looks like Audio Henchmen is coming back full time. They may fire me from the site. But I still own the rights to my podcast and I’ve got a contract. Who wants to hear me melt a mic against the Alt-Right comic fans?

To keep in line with the #”Drama-Free Zone” mission, we have parted ways with @DangerDusty His actions are NOT at all a reflection of what WE stand for! All we want to do is share nerdy/geeky goodness and not shine light on negativity! #PEACE

Good would thank Comic Crusaders for three years on the site.

I would like to thank @ComicCrusaders and their amazing team for last three years. This is a truly talented and passionate group of writers and fans. I wish them all the best. Some fights are better won alone.

Ethan Van Sciver responded to the whole situation by stating that he would create a video about Dusty Good in order to help Dusty out.

This is literally the saddest thread I’ve ever read. Is it worth a video? Yeah, maybe. Maybe it’d help this poor dope out a little.

Dusty, I’m going to let you be our super villain, okay, Shorty? Go rip us up. https://t.co/hPcGsBkcgR